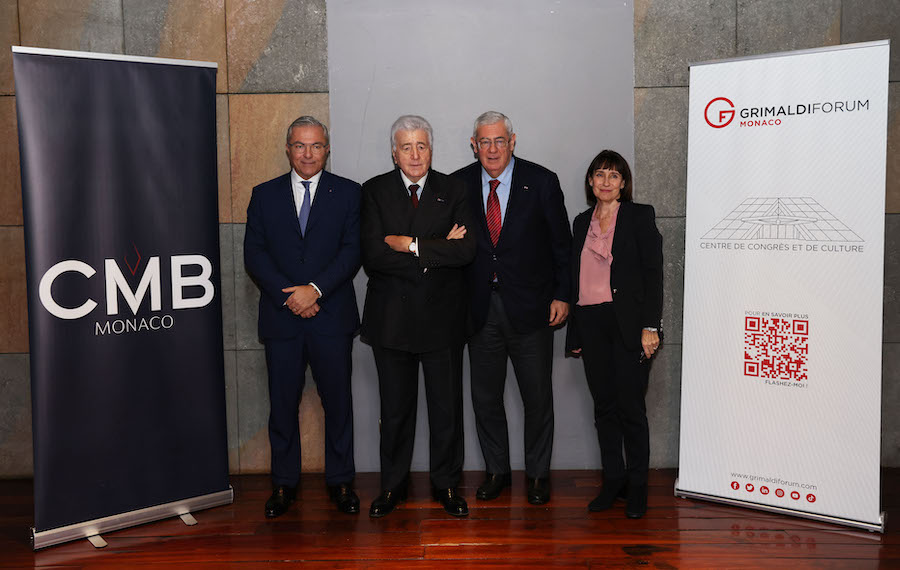 CMB Monaco has renewed for the 19th year as principal sponsor of the Grimaldi Forum, guaranteeing another 12 months of world-class cultural events including the highly anticipated summer exhibition and a new Social Responsibility pilot project.

The sponsorship agreement was signed during a special ceremony on Tuesday 10th January by CMB Monaco Chairman Etienne Franzi and CEO Francesco Grosoli, together with Grimaldi Forum Chairman Henri Fissore and Managing Director Sylvie Biancheri. The agreement covers the Grimaldi Forum’s cultural program in the Principality as well as all its business tourism activities, and marks the 19thpartnership between the two entities.

“This commitment to the Grimaldi Forum, which dates back to 2005, symbolises the confidence we have in this company and our desire to promote culture in the Principality and beyond,” said Etienne Franzi.

Primarily, the sponsorship allows for the Grimaldi Forum’s major summer exhibition, which this year is titled ‘Monet in Full Light’ (Monet en Pleine Lumière), marking the 140th anniversary of Claude Monet’s first stopover in Monaco and the Riviera. It will feature works of the local landscape, some from private collections never before seen by the public.

CMB Monaco and the Grimaldi Forum have also joined forces to promote Corporate Social Responsibility (CSR) values, announcing the launch of a joint pilot project for 2023 for the benefit of the association Les Enfants de Frankie. Led by CMB Monaco and Les Enfants de Frankie, groups of underprivileged children will be invited this summer to discover the Grimaldi Forum’s major exhibition through guided tours and a special welcome.

In its commitment to CSR, CMB Monaco follows a program called ToDEI, which encourages diversity, equity and inclusion, and fights against discrimination in remuneration and career development. Recently certified by the global quality control body SGS (Société Générale de Surveillance), CMB Monaco, which has 51% female employees, has obtained the Fair On Pay certificate, which distinguishes the private bank as a fair employer and underlines its sustainable commitment to equal pay. As Francesco Grosoli explained, “the banking industry has two main elements: technological capital on the one hand, but also and above all human capital”.

Following the official signing, the Grimaldi Forum hosted its annual Galette des Rois celebration in the entrance hall, the first time in two-years, welcoming partners and guests to enjoy this traditional dessert with champagne. It was accompanied by a presentation on the GF’s schedule of events for the year ahead, its 2023 Corporate Social Responsibility (CSR) goals and a presentation on the future expansion of the Grimaldi Forum, which guests could experience for the first time in 3D.

The Grimaldi Forum’s CSR goals for 2023 include the achievement of further ISO certifications, to realise its pilot project for the eco-design of major summer exhibitions, to encourage remote work one day a week for employees whose functions allow it, and encourage one day of work time per employee who wishes to support a local association that benefits the community.

The 3D tour of the new Grimaldi Forum extensions was well received by guests. The technology allows a person to position themselves within the new exhibition and outdoor spaces, which will increase the size of Monaco’s main exhibition centre by 50% and allow the Grimaldi Forum to cater to a much larger audience, host a greater number of events simultaneously, and facilitate more original and creative events.

The 3D technology was first presented at the recent IBTM business travel expo in Barcelona. It is now being taken to various cities across the globe to show potential exhibitors what the Grimaldi Forum has to offer, without having to step a foot in the Principality.