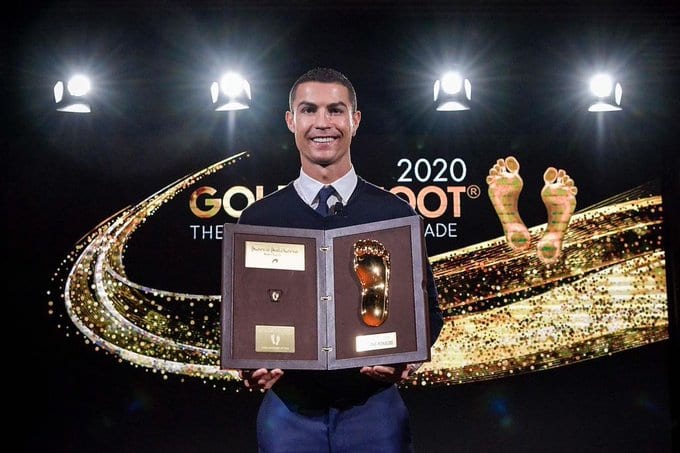 Legendary striker Cristiano Ronaldo has won the 2020 Golden Foot Award in a ceremony that took place uniquely in Italy on Sunday, joining the likes of Pele, Maradona and Zidane and earning his place on the Promenade des Champions in Monaco.
Cristiano Ronaldo can add Best Player of the Year to his five Ballon d’Or awards. He was chosen by popular vote cast via the Golden Foot Awards internet site and received his prize on Sunday, 20th December with the Golden Foot’s founder Antonio Caliendo and Louis Ducruet, representing Prince Albert II, in attendance.
The Portuguese striker was then asked to take a cast of his foot to be added to the new Legends of Football walk on the Promenade des Champions in Monaco, which will replace the current one that is not reachable due to the land extension works.
“It’s something that I was hoping to win one day,” said Ronaldo. “Just look at the history of this prize. The legends who received it are very important, so I am happy to receive it at my turn. This is the first in my museum, I’m so happy!”
Ronaldo also took to social media to publicly share his delight. On Twitter, he said, “I am honoured to win the @goldenfootofficial and to be immortalised on the Champion Promenade in Monaco, together with some of the greatest football legends of all time! I am truly humbled and want to thank the fans all over the world for having voted for me.”
Prince Albert II sent his congratulations by video message, saying, “It will be an honour for the Principality of Monaco to have the footprints of a champion such as Cristiano Ronaldo and the president of the Juventus Football Club, Andrea Agnelli.”
The new site for the Promenade des Champions, as well as how it will look, will be revealed in the coming months.
The Golden Foot award is an international award given to players who stand out for their athletic achievements and for their personality. The award is only given to active players of at least 28 years of age, and can only be won once.
Since 2009, the awards have been accompanied by a charity auction during a gala evening at the Hôtel de Paris Monte-Carlo, and raises funds to help fight AIDS. However, the gala did not go ahead this year and the award was presented in Italy because of the current health situation.
Fans can watch the digital awards ceremony by contacting organisers here: https://goldenfoot2020.discoveryvp.com