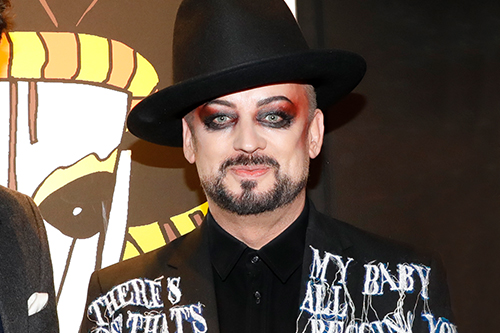 Boy George – the artist – made his world debut in Monaco on Friday night with an exhibition at G&M Design Gallery, adding to an already long list of achievements.

In an exclusive interview, Monaco Life Editor Cassandra Tanti delved into the story behind his latest creative outlet and discovered why faces play such a significant role in his art.

I walk into G&M Design Gallery three hours ahead of the world premiere of ‘Scarmen & Other Imperfections’, Boy George’s first ever public exhibit of his art work. Sitting on a small black table chatting casually with a group of women is the artist himself; a metre away is billionaire businesswoman and gallery owner Lady Tina Green. 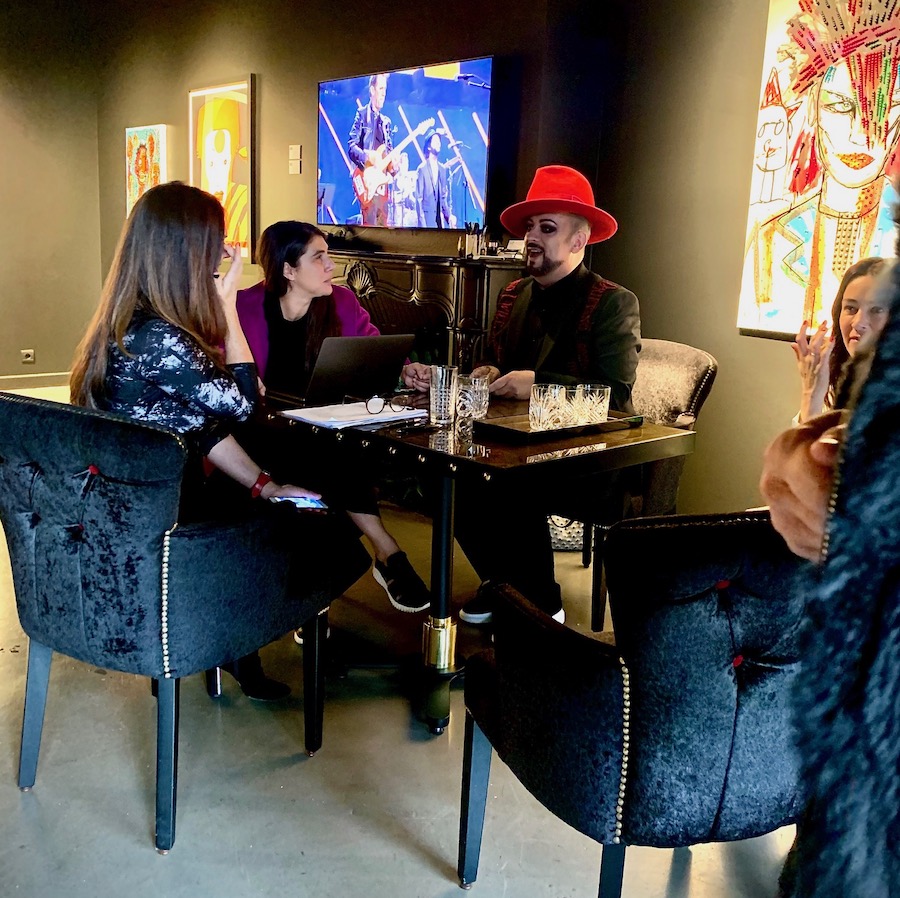 It is with a zen-like air of content that Boy George greets me with genuine warmth and I sit down to begin our interview. I don’t even get to ask the first question as George launches into a free-flowing conversation and I hurry to turn on my recorder.

Considering the last thing I read about Boy George was the fact that he stormed off the set of The Voice Australia, I am thinking to myself, “Well, this isn’t so hard.”

“There are only so many songs you can release,” George shares with me. “I feel like creativity is physical. I have to do get it out; I have to take the risk. Creative expression is about the reaction you get from other people. That has always been the thing that’s fuelled me from the beginning of my life really, when I discovered music at around 10 or 11 years old. That was the beginning of me sort of reacting to the world.”

Boy George was born George Alan O’Dowd in Kent, England and is the second of six children. His father, Jerry, was a builder – a trade that his brothers followed willingly. “Not the most creative environment for a young visionary to grow up in?” I query.

“I actually always thought my father was a creative person who was completely frustrated. He could do calligraphy; he had the most amazing handwriting, and he was actually quite poetic and could sing, but that only ever came out at family weddings when there was whiskey around. My mum also wrote a book in her later life. They were creative, it was just circumstance – they had six children and didn’t have time to express it. My family were quite conservative, but surprisingly open minded when it mattered. When I came out at age 15 my dad was completely cool about it. In fact, they weren’t surprised at all,” he says laughing.

You would assume, then, that it was his only sister who educated the impressionable young George in the world of make-up and fashion, but that influence was gifted by another member of the family. “My sister is kind of a tomboy and my mum didn’t really have a lot of makeup either. But I had one aunty called Josie who was a drop-dead Hollywood beauty, men used to flock to her, and she had a big influence on me in terms of being glamorous and wanting to look beautiful. When I was 17, before I was famous and was just a club kid, I did a photoshoot and somebody had professionally done my makeup. When I came home and showed dad my face, he said “You look like your aunty Josie!” and I yelled, “Finally!”.

It was at that moment that faces became an integral element of Boy George’s creativity. Bright colours, splashes of glitter, bold expressions… it is how George has always expressed himself, only now the faces are on a canvas. 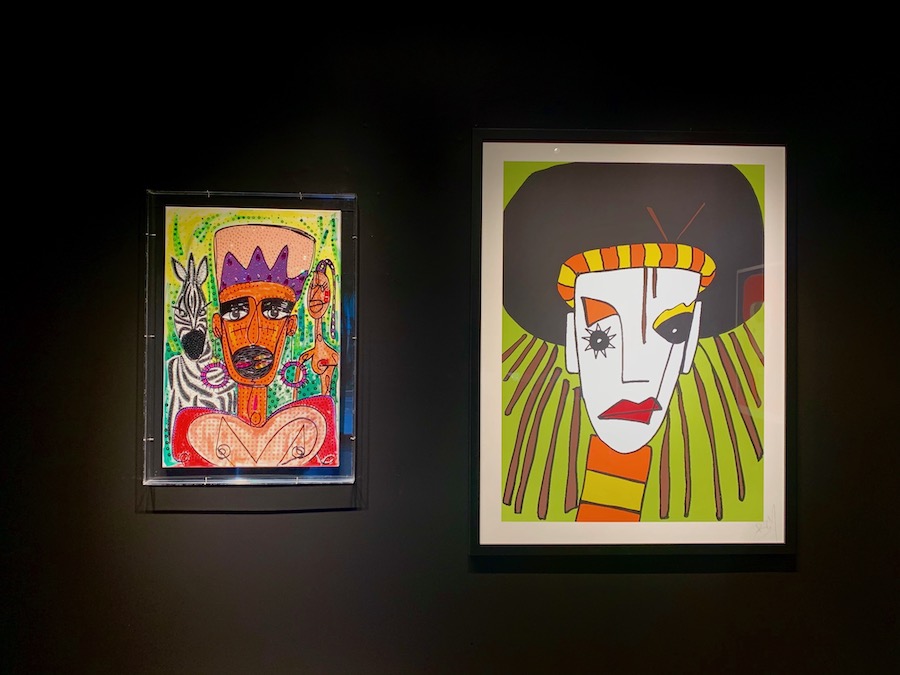 Born in 1961, Boy George was part of the English New Romantic movement which emerged in the late 1970s. “Obviously, I grew up through all of those amazing fashion tribal movements – punk rock, glam rock, reggae… The 70s particularly had a massive influence on me in terms of who I am aesthetically and who I am as an artist.”

He points to his piece ‘Yamamoto’ on the wall opposite us.

“I was at that gig in 1972, when David Bowie came on stage with this incredible Yamamoto outfit and these two women came up to him and pulled it apart. It was really theatrical.”

He recreates that momentous experience with child-like interpretation, a technique that is replicated throughout all of his works. Not surprisingly, Boy George’s influence comes from Keith Haring, the American artist whose pop art and grafitti-like work grew out of the New York City street culture of the 1980s. More surprising is the fact that Boy George has never received any real training.

“I did get a bit of guidance but all that did was make me realise that I needed to find my own way of doing it. I have broken choreographers; I am not someone who can be told what to do.” 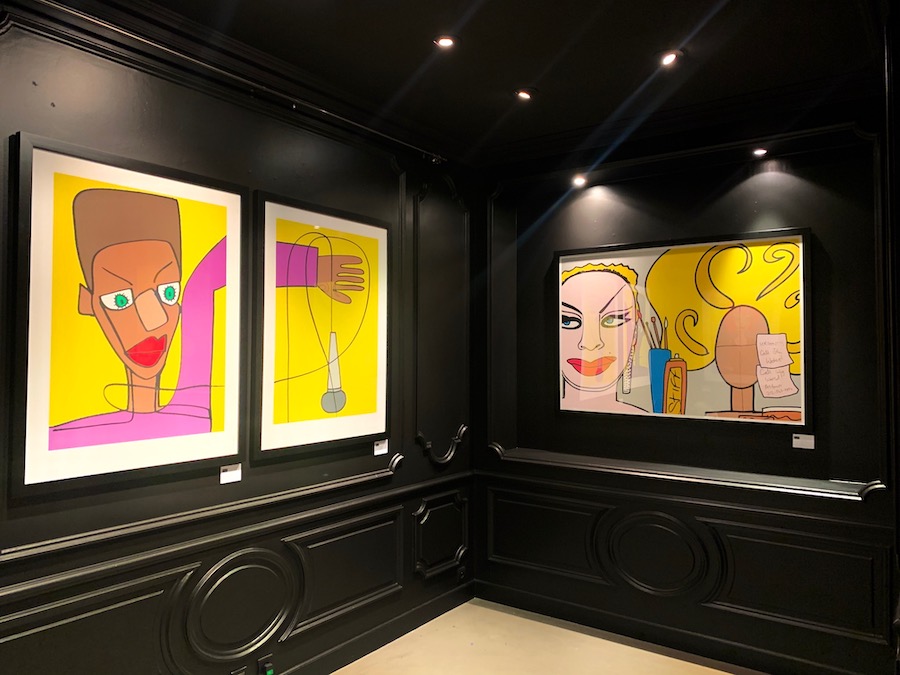 As George explains, each piece of art he creates begins as a small hand drawing.

“For me, it’s the whole process, similar to when you write a song. You are building something that starts quite small and then becomes something flamboyant. Finally, you have the moment on stage – the payoff moment. Like this exhibition.”

Lady Tina Green can be credited for convincing Boy George that his art work needed to go on show publicly, and that her gallery in Monaco was the perfect place for his world premiere.

“Lady Tina was the person that really encouraged me to do this exhibition. I have been stock piling for a number of years now, without any real intention of showing it. To be honest, I don’t really know what I was going to do with it.”

Boy George has, over the years, donated a few of his works for fundraising. In fact, one of his sketches sold for more at a charity auction than an original artwork by the Angel of the North creator and famous sculptor Antony Gormley.

‘Scarman’, the promotional piece for this exhibition, also features in the singer’s new song ‘Let Somebody Love You’. The single is from the album ‘Life’, Boy George and Culture Club’s first album in 19 years.

Boy George may have shot to fame as the flamboyant frontman of Culture Club in the 1980s, but he was also a successful DJ for 25 years, a photographer and is still a fashion designer.

“I started making clothing because I didn’t want to have the same clothes as everybody else. There is no incubation with ideas nowadays, once something goes on the internet it is out there. There is nothing that hasn’t been done before. But what you are left with is your own interpretation of everything and I think that is just as valuable and beautiful as anything else.”

And with that Boy George is whisked away from our interview and taken across the room. As I get ready to leave, he comes bouncing out the door. “I just sold my first ever painting!” he tells me excitedly.

‘Prince’, it turns out, had attracted the attention of a collector hours before the exhibition was even due to open.

Boy George – the artist – is clearly on another path to success.

Scarmen and Other Imperfections is on show at the G&M Design Gallery until 1st November.