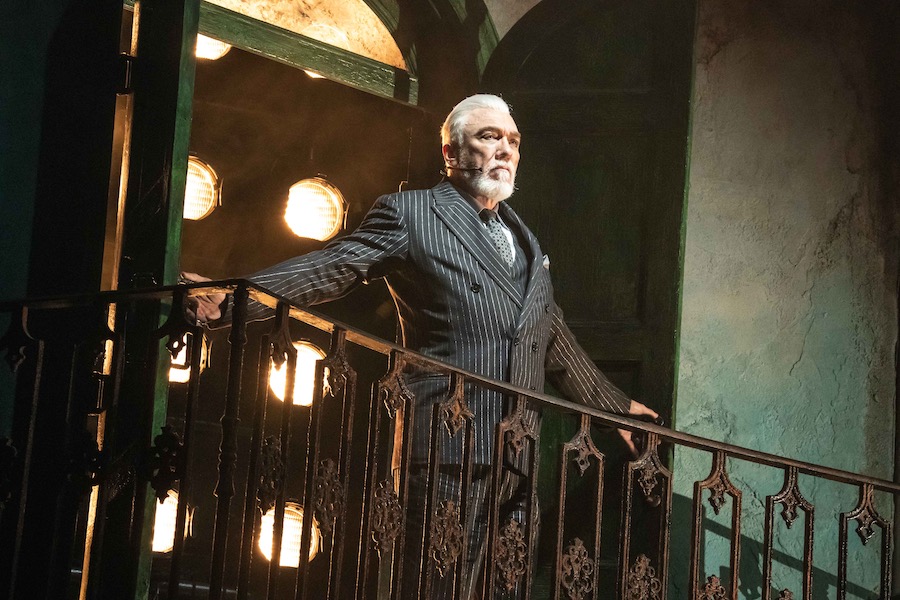 Patrick Page is among the country’s best Shakespeare actors. A critic at the Washington Post has called his Lago one of the top five outstanding American performances of Shakespeare in his lifetime. He is known as the “villain of Broadway” for his iconic takes on complicated characters (Scar, The Lion King; Brutus, Julius Caesar; The Grinch, etc.), including originating the Green Goblin in Spiderman: Turn off the Dark and Hades in Hadestown.

Patrick will leave his role as Hades at the end of December after nearly seven years in the role. He stars as Jacob alongside Ryan Reynolds and Will Ferrell in the new Christmas classic, Spirited, and can be seen as Richard Clay in HBO’s The Gilded Age. Patrick will return to Shakespeare as King Lear at the Shakespeare Theater Company in Washington, DC.

My dad was involved in the theatre; he taught theatr and was always acting and directing. When I was a toddler, we spent three seasons at Oregon Shakespeare Festival. To me, it always looked like more fun up there. That’s the explanation I give, and who knows what genetic, experiential, and environmental factors came into play. All I know is it’s always been who I am, and that desire to create and perform is always there. If I’m not doing it for a living, I’m doing it for fun. It comes from my core and my heart.

You have a one-man show called ‘All the Devils are Here’ enacting Shakespeare’s villains. What draws you to the Bard?

I’m curious about life – why we’re here, why we behave the way we do, and treat each other the way we do, what love is, what evil is. Shakespeare is the person who most deeply engages with those questions. I’m very lucky that Shakespeare was not only a central philosopher and poet in the Western tradition, but he happened to write plays. He would have been important as a philosopher, poet, novelist, etc. but it just so happens he wrote roles for actors. I thought it was a decent way to spend one’s life trying to get good at it so you can share those questions with other people.

Is there a favourite role that you want to go back to and rediscover?

I’m about to play King Lear in Washington, DC. That play has been a touchstone in my life in many ways. I played him at age 22 in undergraduate, and of course, one does the best they can when they’re young, but now I’m 60, so I’ll have another stab. King Lear was 80, so I’m getting closer. I have a marvellous director, Simon Godwin, who is one of the top Shakespeare directors in the world.

It’s a good question in the sense of roles to play or return because when you play the great roles, it’s like writing a draft of that moment in your life, and then you live more – you learn, you lose, you fail – and you want to try again. They are life projects for me, and there are a number of roles that I like to return to.

All of the Shakespeare tremendous mental and emotional challenges, but they are also tremendous physical challenges. They are athletic events – three hours at a stretch, given very few rests and asked to go through the full range of emotions and frequently there is sword fighting and physical challenges. And it is not a movie, so you don’t have a stunt man or a break between scenes. In today’s world, you do it eight times a week. You need to be in the best shape vocally, physically, and emotionally to take it on.

When you’re in a show, how to do you take care of yourself?

The show becomes your only priority. It’s one of the reasons I don’t have children; all my energy goes into the preparation and then the performing of a show. I frequently tell young actors that this is a calling, and while it also happens to be a job, don’t expect it to behave like a job. Callings are tough, but it’s also fun. The main mind trick is to take the emphasis off yourself and place it onto the audience who has come so far and paid so much and placed their hope into you for the evening. You get the opportunity to offer them something that they can’t get elsewhere.

You’re leaving Hadestown at the end of the month. It’s a role you’ve been with since the beginning – almost seven years! Talk a little about that journey.

It’s been one of the great experiences of my life to be part of its creation from the beginning. I’ve watched these great artists, Anais Mitchell [writer and lyricist] and Rachel Chavkin [director]. Anais wrote it a decade before, and it was essentially a song cycle and concept album that was turned into a musical. I did four productions of the play, and each was entirely different, but only in the same way that a child is different throughout their life. It has a soul that transcends. I did workshops in 2015 before 1st off-Broadway in spring 2016. It’s been a tremendous experience.

Then there’s all the fun – the Tonys, the Grammys, and being in a hit show. I’ve done 25 Broadway shows, and it’s very different to be in Hadestown than the other shows. I’ve been in shows that people loved, that they came to, all very good shows, but it’s very different to be in a hit where there is a voracious appetite to get to the show, and it’s part of the zeitgeist. It happened a bit with Spiderman, but this is a very special experience, and I’m so proud of it.

What are your feelings as you depart?

There is a certain element of relief in not having to sustain. Acting is simple in some ways, but it’s never easy to repeat a performance over and over. In performing on stage, what you really get paid for is the ability to make it seem like the first time every night, and there is a sense of exhale when one leaves a long run. It’s bittersweet; I’ll miss the audience, the actors, the band, and my little dressing room in Times Square. In our shutdown, I saw other shows go and come back. I realize that our show is not the norm. The ovation we receive is extraordinary. All of that I will miss, but it’s time to go.

You’ve always been a theatre actor. We’ve started to see you more on-screen – Spirited, The Gilded Age. What’s drawing you to the screen now?

A lot of it isn’t choice. It’s opportunities that have come to me. I’m really grateful, and it’s wonderful to be learning a new medium at this stage in my life. Acting in many ways is just acting: it’s either the truth, or it’s not. But there are a great number of technical differences: in a play, you rehearse, and you do it from beginning to end, living a character’s journey. In a TV series or film, you might take one scene, and that’s the shoot for the day. You’re repeating it over and over as they change camera angles, etc. So, you’re playing a minute of a role 20-30 times a day as opposed to the character’s journey eight times a week. It’s a very different skill set, and I’m enjoying learning.

King Lear in Washington, DC. I hope to film the third season of The Gilded Age, and I’m excited about the direction my character is going into the second season showing early next year.

If you could act opposite Princess Grace in any of your work or her work, what is it and why?

She had a quality that was almost spiritual and angelic. Yet she was very, very human. She would be a superb Hermione in The Winter’s Tale, and I want to pay Leontes, so I’ll choose that.

Do you have any final words for the Monaco community.

I’m so grateful for the people who support the Princess Grace Foundation. I want them to know what a difference it makes. When I was a young man, I was given this award, and it was the first time I had been to New York City. The Princess Grace Foundation flew me from Utah to New York; being in New York was the first time I could imagine having a life here, and that was the beginning of the trajectory that brought me here.