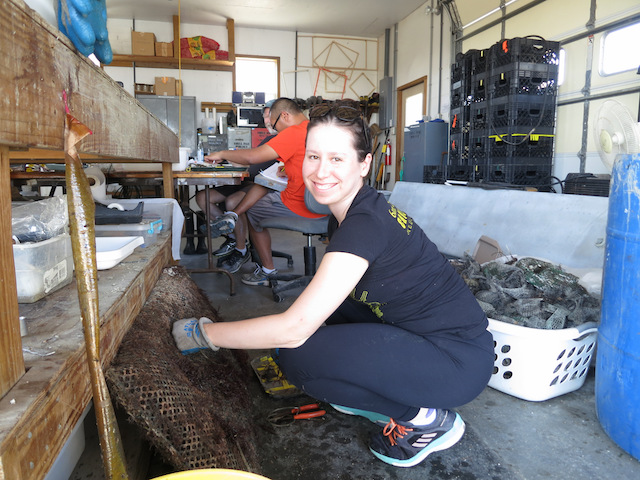 The Women in Ocean Science (WIOS) committee, headed by Monaco Scientific Centre’s Dr Christine Ferrier-Pagès, has awarded its first recipient, an American scientist working with Caribbean coral reefs for the Smithsonian.
Dr. Sarah Gignoux-Wolfsohn has just received the grant offered by Women in Ocean Science for her work with the Smithsonian Environmental Research Centre studying pathogenic bacteria that are threatening the bi-valve mollusc populations in coral reefs. She is the first beneficiary of the prize.
“I am very excited to be the first recipient of the WIOSA,” Dr Gignoux-Wolfsohn said. “I am honoured to have been chosen by the amazing scientists at CCMI and WIOSA advisors. I am looking forward to contributing to the amazing woman-led research programmes at CCMI and to help mentor the next generation of female scientists.”
The award will help advance the scientist’s research programme, integrating theory and ideas from other systems with her PhD work on coral health and disease.
“Infectious disease is one of the greatest threats to corals and the coral reef ecosystems they build,” she said. “By testing methods to improve the resilience of coral communities, my work at CCMI will advance our understanding of community ecology, disease, and microbial community composition with implications for coral restoration and the creation of resilient coral reefs.”
The WIOS committee is comprised of prominent female scientists and include, in addition to Monaco’s Dr Ferrier-Pagès, Drs Carrie Manfrino, Sylvia Earle, Amy Apprill, Gretchen Goodbody-Gringley and Hollie Putnam.
The award given is made up of two $10,000 grants. One is given to the researcher, the other to support an entire month of field work, in this case at the Little Cayman Research Centre where Dr Gignoux-Wolfsohn undertakes her studies. She was selected from a group of candidates coming from 10 different countries working at the best labs in the world.
Although great strides have been made over the past 30 years, women are still underrepresented in key positions in the marine scientific community. WIOS aims to level the field having created a network of advisors for female researchers working on topical issues regarding coral reefs.
Women such as Monaco Scientific Centre’s Dr Ferrier-Pagès are pioneers. Her situation is an anomaly in this male-dominant profession. “The laboratory in Monaco is rather well balanced, as all the heads of different sections are in fact women,” she explained to Monaco Life. “But overall in Europe, the United States, Australia, and the like, there are many women in science, but not in high positions. There is always one woman for every 10 men.”