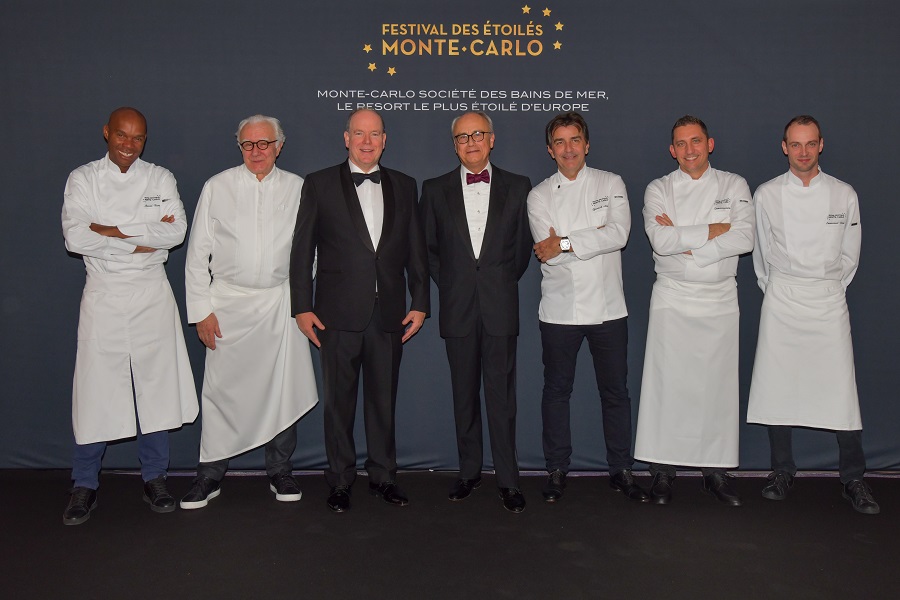 The world of haute gastronomy looked to Monaco this autumn as the Principality’s greatest culinary talents collaborated at the Festival des Étoilés.

In part a celebration of art de vivre, but also a showcasing opportunity for its organiser, the Société des Bains de Mer (SBM), this second edition of the Festival des Étoilés came to a glittering end on Saturday 26th November with an exceptional gala dinner at One Monte-Carlo.

In the presence of Prince Albert II, the four star-studded chefs, who had each hosted a dinner during the festival, then made their entrance.

Yannick Alléno, Alain Ducasse, Dominique Lory and Marcel Ravin had put their heads together for the menu of the closing night, and like headline acts in a musical show, the chefs performed their own art before the eyes of the evening’s 140 esteemed guests, working in unison around a passe-plat on the stage.

As the chefs prepared their plates, four chief sommeliers from across the SBM group opened numerous bottles of wine hand-selected from the Hôtel de Paris’ wine cellar, the largest of its kind in the world.

Alain Ducasse and his chef de cuisine, Emmanuel Pilon, from Le Louis XV Alain Ducasse in the Hôtel de Paris were the first pairing to seduce diners with an entrée of gamberoni of San Remo with myrtle and shrimp coral, and an iced pumpkin kefir that was accompanied by a Chablis 2018 chosen by Maxime Pastor, the chief sommelier of the three Michelin-starred restaurant.

Blue Bay’s Marcel Ravin and its chief sommelier, Gérard Veyrat, then took up the mantle for a fish course featuring Indian wood leaves and a coconut water and floral giraumonade blaff that was paired with a Meursault 2017.

The four-course gala dinner was brought to a culinary close by Dominique Lory from Le Grill at the Hôtel de Paris. His offering was a Gisèle Taxil quince granita and Faisselle sorbet that was paired with Alain Ducasse’s Shichiken Sparkling Saké by Patrice Franck.

“I wish to warmly congratulate our chefs and all of the teams from our different Monte-Carlo Société des Bains de Mer establishments who rallied round to make this exceptional dinner and to promote our seven-star resort,” said SBM’s deputy chairman, Jean-Luc Biamonti. “It is through combining all of these talents that [SBM] can best fulfil its mission and create exceptional moments.”