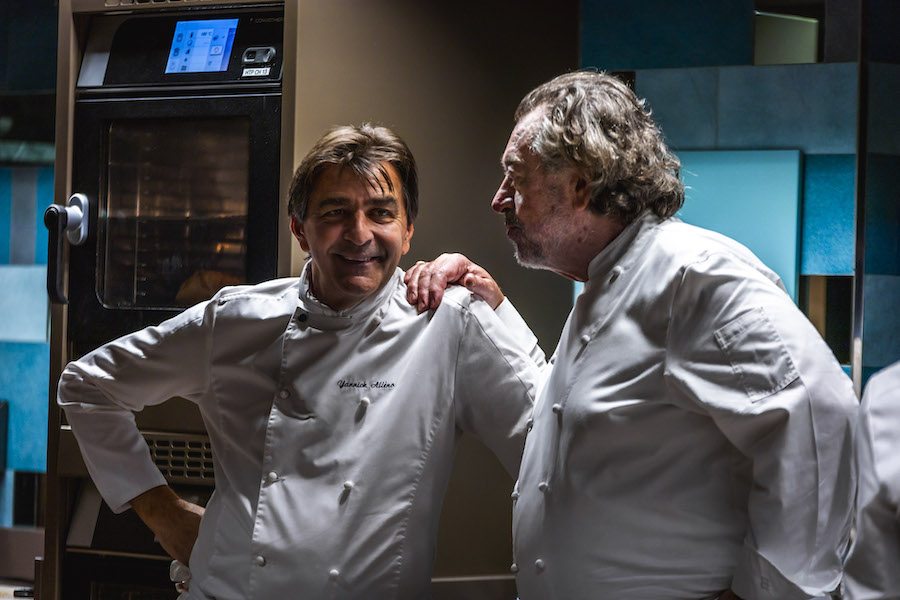 The Festival of the Stars has brought together Monaco’s adopted multi-starred chef Yannick Alléno and two-starred Bruno Verjus for an “only in Monaco” gastronomic experience.

The Monte-Carlo Société des Bains de Mer (SBM) may boast seven Michelin stars amongst its establishments in Monaco, but there’s always room for more, especially if they’re some of the brightest stars in the world.

This year marked the second edition of SBM’s Festival of the Stars Monte-Carlo, held at some of the company’s most famous restaurants.

It began at Le Louis XV-Alain Ducasse at the Hôtel de Paris where the man himself, Alain Ducasse, collaborated with his chef Emmanuel Pilon and triple-Michelin star awardee Clare Smyth from the UK for a special lunch and dinner service.

On 7th October, Monte-Carlo Bay’s two-starred Marcel Ravin and modernist Australian chef Shaun Hergatt came together for a “four hands dinner” where both chefs drew on their roots and surroundings for inspiration.

By 15th October, the Festival of the Stars was well underway and it was time for Yannick Alléno, who holds a total of three Michelin stars across two restaurants, and his Pavyllon Monte-Carlo restaurant to take the reins.

The Paris-based chef called on his “very close friend”, two-starred Bruno Verjus, to propose something new for his guests because, as Alléno says, “life is too difficult to waste time not enjoying it and sharing good times with friends”.

It was an invitation that Verjus, who opened his first restaurant at age 54, could not turn down. “When Yannick Alléno invites you, you always feel super happy,” the chef tells Monaco Life. “I don’t really belong to this world of chefs because I arrived to this story only nine years ago, but Yannick has always taken care of me; he was always very interested in what I was doing with food, with the products. What Yannick and I do with food is love, in a way.”

The food writer-come-two Michelin star chef has a deep passion for sustainable ingredients. At his restaurant Table in Paris, the dishes are often dictated by the suppliers and what they can provide that day.

“It means you are not in your comfort zone, always repeating the same story with the same dishes in the same way,” says Verjus. “It pushes my staff to be creative, to think and not just do. It is a super good energy.”

That good energy translates on the plate to Jardin éphémère – a bold and beautiful beetroot “millefeuille”; Bruno’s revolutionary mi-cru-mi-cuit (half raw, half cooked) lobster; and Japanese-style sea bass, hung for three days and enriched by its own natural fats, served with Oscietra Petrossian Caviar.

But it is his chocolate tart, infused with capers and topped with caviar, that highlights why “King Bruno” has a three-month waiting list at his Parisian restaurant.

“I love Bruno because he is a fanatic, and he does fanatic food!” laughs Alléno.

Thankfully, there is no three month-wait in Monaco. The Festival of the Stars is a unique opportunity for residents and visitors to try world-famous cuisine without having to step foot out of the Principality.

And if that isn’t enough, all the dishes come together right before your very eyes. Seated at the counter, you can watch the chefs “dance” around their stations to form each plate, before the legend himself places it in front of you, cutting open your Badaboum egg to reveal the caviar surprise, or finishing it with a shaving of fresh truffle. You can chat with the chefs, ask questions, praise them and press them for their secrets.

It is one of the drawcards of the Pavyllon Monte-Carlo, a sister to Yannick Alléno’s Pavyllon Paris restaurant. It’s only been open a matter of months at the Hermitage Hotel, but Alléno believes that it has been lovingly embraced by the local community, as has he.

“Today I am a Monaco chef, I feel Monegasque,” he smiles.

Next up at the Pavyllon Monte-Carlo is a “creative” weekend brunch (it wouldn’t be Alléno if it wasn’t creative), a perfect excuse to spend cosy days in this beautifully designed restaurant.

The fourth and final collaboration of Festival of the Stars took place on 21st and 22nd October at Le Grill, where newly appointed Executive Chef Dominique Lory was joined by Italian two-star chef Davide Oldani for a never-before-seen fusion of Riviera flavours and mouth-water “pop cuisine” (cucina pop).

Stay tuned for our next interview and book your place now for the Festival of the Stars grand finale gala on 26th November, when Alain Ducasse, Yannick Alléno, Dominique Lory and Marcel Ravin come together to cook for one spectacular evening at the Salle des Arts at One Monte-Carlo.

To hear the full interview by Monaco Life’s Cassandra Tanti with Yannick Alléno and Bruno Verjus, click on the Podcast at the top of this article!