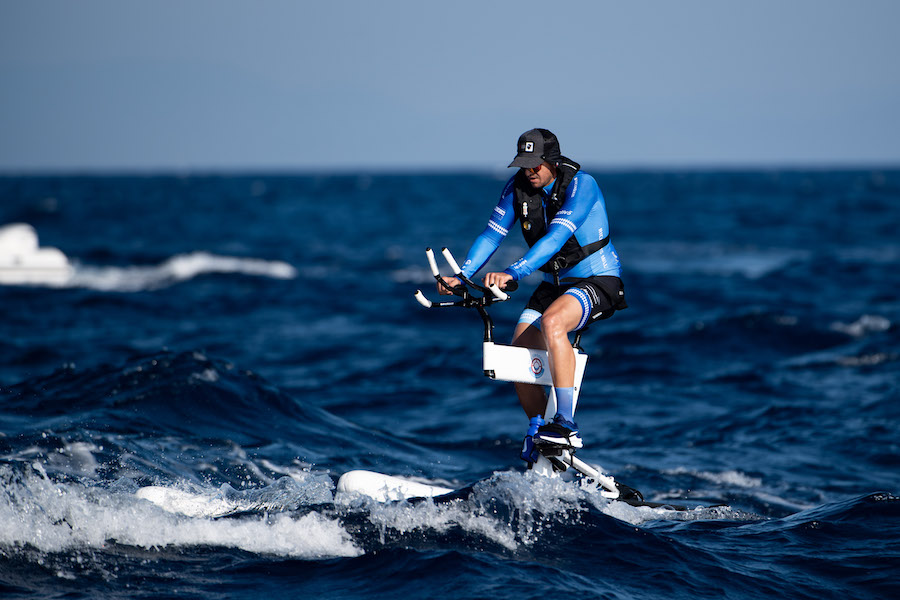 This Sunday, athletes and celebrities will race in teams across the port of Monaco on water bikes. Gareth Wittstock, Secretary General of the Princess Charlene of Monaco Foundation, tells us more about this exciting fundraising event, and how the public can get involved.

After weeks of training, 10 athletes and two celebrities will form teams of five on Sunday 5th June for the Foundation’s biggest sporting event of the year. The line-up in 2022 is unprecedented, with everyone from former F1 driver Mika Häkkinen, to footballer Cesc Fabregas, MMA fighter Sofiane Boukichou, and model Victoria Silvstedt battling it out over a 25 kilometres relay course in the port, before racing to the finish line at the Yacht Club of Monaco.

And this year the public are invited to come and cheer on their favourite team from the Solarium – Digue Rainier III at the YCM.

Monaco Life: Where did the idea for the Riviera Water Bike Challenge come from?

Gareth Wittstock: This was originally HSH Princess Charlene’s idea: to create a sports event that would raise funds for the Foundation and raise awareness of what the Foundation does internationally. We saw the water bikes as a new way to bring people together for a fun and competitive challenge around the Foundation’s values. To use water sports for this cause felt relevant, as drowning prevention and water safety are the main themes of the educational projects supported by the Foundation.

It has changed format a few times over the years, will this relay in the port of Monaco be the permanent format?

The concept was to gather sports celebrities in Monaco for an original challenge that combines solidarity and competitive spirit. Having a large number of participants is great, as it helps us scale our impact and communication. This was the initial format of the Riviera Water Bike Challenge: in 2017, the participants raced from Nice to Monaco and in 2018 they raced in relay in the Port of Monaco, with more or less the same course as this year. It was only in 2020 that, due to the pandemic, we could not bring together many competitors like we had done the previous years, and we decided to go through with an old idea: crossing the Mediterranean on water bikes, from Calvi to Monaco!

You have a diverse array of participants – mostly athletes, from bodybuilder Ulisses Jr, to 16-year-old BMX rider Kayden Keyser, and then model Victoria Silvstedt and singer Terence James. You must be thrilled with the line-up. Why do you think so many were keen to support the Princess Charlene Foundation?

The celebrities are a big part of the Water Bike Challenge’s conviviality, and we are truly thankful to them for answering favourably to participate this year. We know that it is a very busy season, but these celebrities are all convinced by what the Foundation does and by the projects supported by our fundraising. Also, I do believe that the water bikes offer the promise of a unique sports event in Monaco.

Would you agree that there’s going to be some competitive spirit on the day?

Yes, most definitely. We know that Sunday will be about friendship and sharing throughout the day, but once the athletes are on the water bikes they will forget about that and focus on one thing: winning. I know some of them who do not take kindly to losing!

The forecast is for 26°C, so it will be a scorcher of a day. How do you think that will impact the relay?

The weather can be unpredictable, but we’ll be happy if it’s a sunny day. Of course, the heat makes it harder on the nerves and the relay strategy will need to be adapted accordingly by each team. The organising team, the volunteers as well as our partners will be there to make sure that all the participants always stay hydrated and energised.

You raced in the previous bike challenge from Corsica to Monaco. What are some of the challenges that the riders will be facing this year?

The Crossing: Calvi – Monaco Water Bike Challenge was an amazing journey, and we were joined by a wonderful team. My sister HSH Princess Charlene was really dedicated to this challenge, and we did it through gruelling conditions. The water bike feels different in open seas, and when we left Calvi there was a lot of swell and waves. The swell is what makes riding a water bike very difficult anywhere, as it is not as stable as you would like and it increases the resistance on the propeller. Hopefully, the sea will be calmer on Sunday in Monaco.

How much has the charity event raised to date and where have the funds been directed to?

Both the 2017 and 2018 editions of the Riviera Water Bike Challenge raised funds for the multi-purpose training centre in Loumbila, Burkina Faso. This project was co-funded with the Government of Monaco and the Red Cross, and the Princess Charlene of Monaco Foundation still finances aquatic rescue and swimming lessons in the pool that was built there. It was a massive success, as more than 1.2 million euros were raised in total. In 2020, we raised more than 600.000 euros for different drowning prevention projects through an online donation page, as our supporters were following the Crossing live.

Where will the money raised from this year go and why?

This year, we support a new project: ‘Swim for Safety’ in Sri Lanka, to teach swimming and water safety to disadvantaged children. Drowning is a major health issue in that country, and they will host the next World Conference on Drowning Prevention in 2023. We chose to highlight this project because there is a real need and an impact behind the help that we bring to these communities, and it symbolises the reach of the Foundation worldwide.

In addition to watching the relay, how can people get involved this year?

There are two ways that people can get involved this year, whether present physically or not. They can watch the race and have access to the ranking online through the tracking app that we put in place, as each water bike will be equipped with a GPS device (www.fpcm.mc/live). Additionally, leading up to the race, they can vote for their favourite team while supporting the Foundation and the ‘Swim for Safety’ project, by donating through our page (www.fpcm.mc/donate). The team with the most donations in the end will receive a special award!

Top photo of Gareth Wittstock in the 2020 The Crossing by Manu Vitali, Direction de la Communication