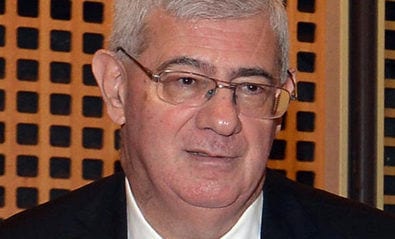 Ambassador Henri Fissore has been appointed Chairman of the Board of the Grimaldi Forum, succeeding Jean Pastorelli, Minister Plenipotentiary, who held the position from 2011.

Mr Fissore was General Director of the Department of the Interior and then Inspector General of the Administration before becoming a member of the Government, twice, as Government Councillor for Finance and Economy and then for External Relations.

A well-known and popular figure at CREM, the Club for Foreign Residents of Monaco, Ambassador Fissore was the key organiser of the very successful “Year of Russia” held in the Principality in 2015.

His extensive experience in the functioning of Monaco’s institutions, particularly in the field of economic development, and his international vision constitute an expertise which he intends to bring to the Grimaldi Forum.

Inaugurated in 2000, the Grimaldi Forum is headed by Sylvie Biancheri, General Director, and welcomes a hundred events across the year, the vast majority of which is business tourism, including congresses and conferences. Additionally, every year, it organises a major summer exhibition and international shows such as Top Marques.

Photo: DC[/caption] As part of the Larvotto land extension project, the Prince's Government has launched an ambitious transplant operation for Posidonia, a protected underwater plant. A significant portion of the plants has been moved to two sites: within the Larvotto reserve and at the foot of the Fontvieille dyke. Bouygues Travaux Publics, which is carrying out the maritime infrastructure works in collaboration with Trasomar and Andromède Océanologie, has just completed the transplantation of 500 square metres of the plant. Posidonia oceanica is emblematic of the Mediterranean. Today it’s a protected species and constitutes a major marine ecosystem with a large biodiversity. It is also a source of oxygen and a trap for carbon. There is currently no proven method for such a transplantation operation. Prior to the move, a scientific research operation was conducted to optimise posidonia displacement involving 637 metal baskets covered with canvas of biodegradable coconut fibres. Pierre Descamp, managing director of Andromède Océanologie, has been involved in the project for more than two years. He said: "Replanting the posidonia in the reserve was quite simple: we dug several holes in the sediment to the width of our specimens and once the plant was installed, we filled the interstices. In order to maintain its characteristic structure in a herbarium, the baskets were tightened to the maximum.” In Fontvieille, the relocation took place differently. Planters were installed 14 metres deep to accommodate the baskets. The baskets were set with sediment so that the plant could live and develop there. Marie-Pierre Gramaglia, Minister of Public Works, Environment and Urban Development, said: "After the displacement of 147 large molluscs from the area of the future extension to the Larvotto reserve, transplantation of 500 square metres of posidonia is the second major operation in the preparatory environmental work. A follow-up over 10 years, will ensure the success of the movement of this protected and emblematic species.”