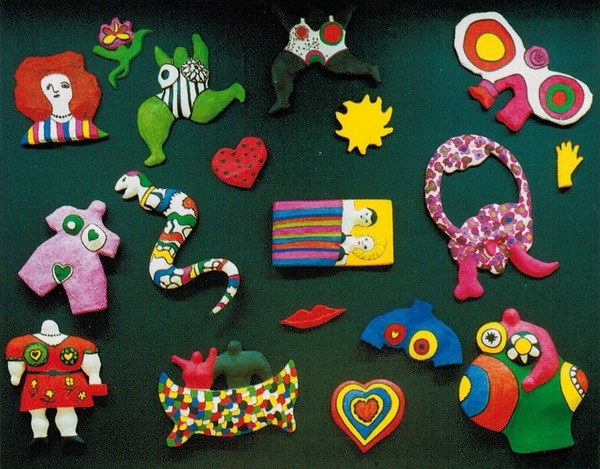 “Last Night I had a Dream” is the title of an exhibition of the work of Niki de Saint Phalle, at Jonckheere Gallery, from April 25 to June 29.

Niki de Saint Phalle, first a model and then an apprentice comedian, was born in 1930. She exorcised the violence of her childhood through her art. Having become iconic among women artists in the second half of the twentieth century, she was seized by the whimsical power of the work of Antonio Gaudi, whom she met for the first time at Park Güell in 1955.

The end of the Sixties marked her desire bring in large sculpted sets of figures which featured a variety of mythical creatures and serpents combined with images from remembered dreams and overflowing imagination.

A group of eighteen painted polyester sculptures, made in 1968, exhibits signature motifs, repeated on several occasions in drawings accompanied by texts dating from the same year. Reflecting on her intimate questioning, oscillating between humour and irony, these sculpted and painted totems are the vectors of her emotions: colour, round shapes, full-bodied women, serving to hide deep suffering.

This series will be fully exhibited at De Jonckheere Gallery on avenue Princesse Grace, and will kick off the inaugural Monaco/Monte Carlo Art Week from April 25 to 29.

Monaco/Monte Carlo Art Week is the collective result to promote the Monegasque art scene in order to position the Principality on the international art market. Bringing together various galeries,, museums, foundations, art schools and, hopefully, auction houses, the event aims to contribute to an artistic attraction that is part of Monaco’s cultural influence.

Local News Staff Writer - March 20, 2019
Formula 1 world champion and long-time Monaco resident Nico Rosberg is the new ambassador for EVER Monaco in line with his commitment to the environment.