Inside the quiet corridors of Monaco's aquarium

Inside the quiet corridors of Monaco's aquarium

Never in its 110-year history has the Oceanographic Museum ever had to close its doors for more than a few days. Even during two World Wars the museum remained open to the public.
In April, thousands of families normally flood the dark corridors of the museum’s aquarium to admire the thousands of fish, corals, and the new turtle rehabilitation centre.
But the only people to grace this grand old dame now are a team of dedicated staff, tasked with keeping its inhabitants healthy and the aquarium running smoothly during lockdown.
To understand more about how the aquarium operates behind closed doors, Monaco Life spoke to its curator Olivier Brunel, who was just getting geared up to clean the turtle enclosure.


Monaco Life: The aquarium is the main drawcard of the Oceanographic Museum. How many fish live there?
That’s a difficult question to answer. While it is easy to keep track of the number of big fish and sharks, it is difficult to know the exact number of fish in the aquarium, like clown fish for example. But we estimate it to be between 6,000 and 10,000 fish. Meanwhile, we have over 300 fish species and 550 species of corals.
Is it strange to be inside the aquarium now during lockdown, with no visitors?
We are getting used to it now, but at first it was very strange to see the museum empty with no visitors, as well as no colleagues.
Well, we actually have the technical team still working, and those in charge of cleaning and disinfecting the museum, so it’s nice to have them here. And some of the administrative teams are here also. The aquarium team is now made up of between six to eight people to reduce the amount of contact we have between each other, and we alternate the days that we are physically working on site. There are around 20 to 25 people in the museum currently, whereas normally there are more than 100 staff working simultaneously. 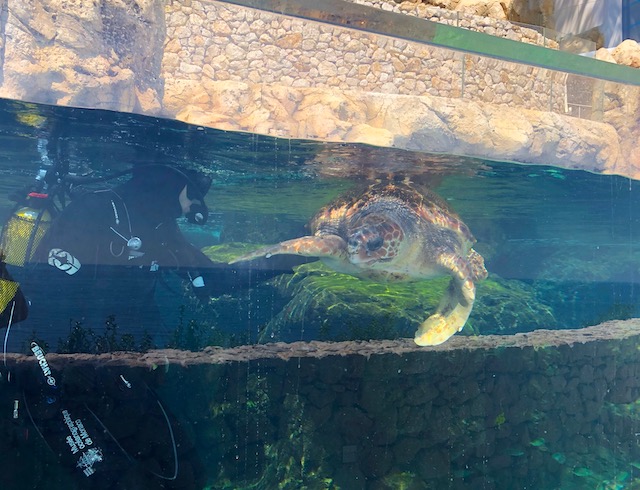 Why is it important for staff to remain at the aquarium during lockdown?
It is incredibly important that we are here. Firstly, we have to take care of the fish, to feed them and keep an eye on them. We also have to check the temperature of the water, lights, pumps, oxygen etc – everything that keeps the fish alive. Thankfully, I can also connect to the network from my computer at home to check levels.
Normally, we clean the glass panels of the aquariums for visitors to see the fish. We must continue to do this – even though there are no visitors – because dirt will build up and it will become very difficult to remove after a week, for example.
So, we basically maintain the daily work schedule as we did before. We haven’t actually changed many things, we have just reorganised the work to be done with less people.

So, how many people normally pass through the Oceanographic Museum?
Each year, there are 650,000 visitors, so for the fish and for us it can get very busy, particularly during the summer.
We have seen some interesting videos from across the world of animals’ reactions during lockdown, like the penguins let loose in a Chicago zoo. Do you have any similar quirky stories or have you noticed a difference in behaviour of the fish now the crowds are gone?
Well, we don’t have penguins (laughing) but I think that the fish are enjoying this period because there is no one taking pictures of them with a flash, there are no kids tapping on the glass panels, there is no noise… nothing. I think they are appreciating the peace and quiet to be honest. We also have more time to check the aquariums at different times during the day, so I would say that we are able to pay more attention to them than normal.

Apart from the entertainment, what role do aquariums play?
We have a team who works closely with schools and kids on educating about the fish in the aquarium but also the oceans on a larger scale. Our mission is to educate people, not simply to show them the fish. I always say that our job is to make the aquarium as nice as possible so that people can be amazed, and then we can start to explain that, yes it is beautiful, but it is also in danger and if we don’t do anything to change our habits, then it might not stay this beautiful forever.