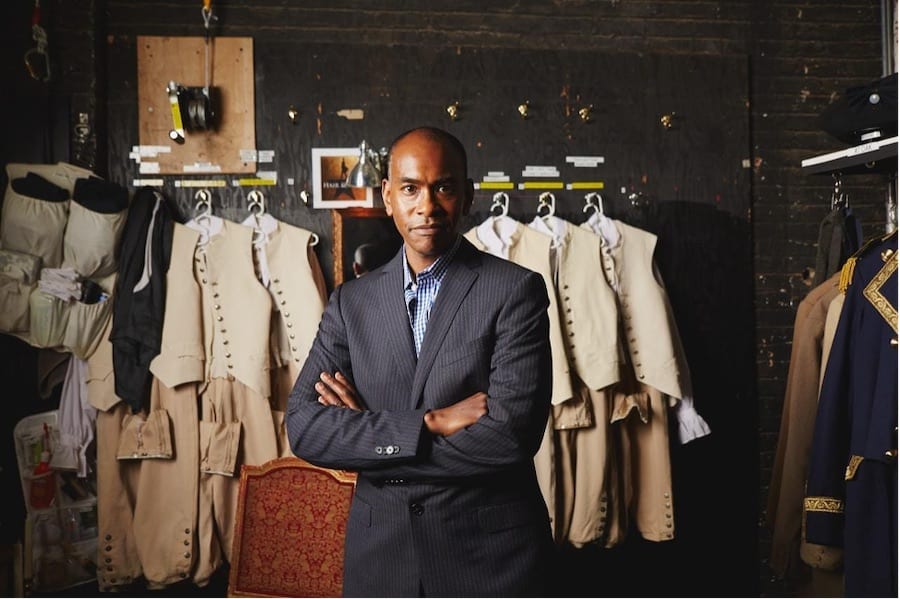 In this month’s exclusive interview for Monaco Life, Princess Grace Foundation-USA’s CEO Brisa Trinchero catches up with one of America’s most acclaimed costume designers, Paul Tazewell, about the intricacies of theatre design, his favourite Grace Kelly looks, and what’s to come in the future.
Paul Tazewell is a highly acclaimed costume designer for film, theatre, and dance. Notable masterpieces include Hamilton (Tony Award for Best Costume Design), The Wiz: Live! (Emmy Award) and costumes for Steven Spielberg’s upcoming West Side Story film. Paul received his Princess Grace Award in 1993, and in 2004 Paul received the Foundation’s highest honour, the Princess Grace Statue Award.
Earlier this month the Foundation partnered with Paul to create four exclusive designs of limited-edition, hand-sewn face masks inspired by Grace Kelly’s iconic fashion looks for the holiday season to support the Foundation and the creative communities that have been impacted by Covid-19.
What made you become a costume designer?
I grew up in an artist-filled family, and when I entered grade school I was transfixed by the performances at the school. There was a production of Oklahoma that I remember seeing at the neighbourhood high school and, when I began high school, I started performing in those productions as well as learning how to sew and design the costumes. One thing led to another and I entered Pratt Institute in Brooklyn to study fashion, but my main intention was to be in New York to start to educate myself around performance.
I decided to transfer to the University of North Carolina School of the Arts in Winston-Salem and by the end of my first year, I decided to let go of my dream to be a performer and take hold of the dream of being a costume designer. Much of it was about longevity, and some of it had to do with avoiding being typecast and being able to embrace many different types of characters. My interest from the performance end has infused itself into how I approach costume design. I use my experience and ability in interpreting character development and understanding movement as I interpret fabric and how it will move in space and live on a person’s body.


You won your Princess Grace Award long before your many accolades. Can you tell us where you were in your life at that point and what the Princess Grace Award meant for you?
I was introduced to the Princess Grace Foundation through Arena Stage in Washington. I had just graduated from NYU with my graduate degree in costume and set design. They asked me to come and be a part of their staff for a year. When I entered, they suggested that we approach the Princess Grace Foundation to pay for part of my salary. That experience overall allowed me to hone my skills and mature as a costume designer outside of New York; I was not under the gaze of everyone watching but there was still some visibility.
While I was there, George C. Wolfe saw a production that I had designed and he invited me to New York, where he was a director working on the new Broadway musical, Bring in’ da Noise, Bring in’ da Funk. It was a fantastic show created with Savion Glover and I was invited to design the costumes for his production which was my first Broadway show. I was then nominated for a Tony award for that production. So that was quite a wonderful experience for me.
And that was just the start of your relationship with the Princess Grace Awards…
I continued to stay in contact with the Princess Grace Foundation-USA and later received the Statue Award. It came at a very opportune time; I was just leaving an institution and going into being a freelance designer in New York, which is really hand-to-mouth as an artist. I felt so supported by the Foundation.

What is your process when you start a new design role?
My process started at North Carolina School of the Arts, where I received a strong foundation on how to approach the text, how to imagine what a world might be developing, what conversation looks like with the director, and the skills to be able to generate those images on paper so that I can hand it over to someone else to build as costumes. Once I understand what the text is, I start to do research and pull images from all over, then whatever music goes along with it and the screenplay. Let’s say I might also go towards something that is emotionally driven. That’s something that speaks to me as I think about how the story might be told, that might be disconnected from the actual period and structure of the text. If it’s a ballet, it’s talking to the choreographer and understanding what the story is that is being told from their point of view.
I see the director as an editor of my images and of my ideas, and the leader that conveys the story because it’s their vision and they need to carry all of the designers and all of the actors through the process of delivering up a story, whether it’s musical or play or ballet. After picking through and establishing what our world will be with the director – with the inputs of the set designer, the lighting designer, and the sound designer – I start drawing.
I make specific choices for specific characters that move through time. Once those elements become two dimensional images, I’ll back it with period or contemporary research and how to realise this idea. I then choose independent costume shops around New York City with amazing tailors and amazing dressmaker’s that do custom beading and embroidery, that will be appropriate for the type of costumes I’ve designed.
Can you explain the difference between designing for Broadway versus film?
For Broadway, the costume has to withstand the wear and tear of eight shows a week. So, it’s less about the fabric that’s chosen and much more about how the interior is built so that it holds up. With Hamilton, we have an amazing wardrobe staff and team, dressers and maintenance people that take care of those clothes and make sure that they all look great every time that the show is performed.
With film, most of the time you’re looking for naturalism. If you look at some of the dresses from the 1930s, many of them were made by the people that were wearing them in real-time; they were made in a person’s home or if they were purchased, they have an interior that we don’t even get in clothing today. There’s a sense today that clothing is more disposable.  In previous periods, the clothing was built very well and that was the case for the 30s. Some suits were built beautifully. The menswear is always gorgeous. The fabric might be moth-eaten, but the structure of the garment will still be present.
So, you’re trying to recreate that within the film where with theatre you need to balance both. You need to be able to make something that looks like it has very little support but something that will withstand all the shows.
Do you have a favourite costume from all of your shows and films?
The Schuyler Sisters’ ball dresses for the song ‘Helpless’.
Where can we see your work next?
West Side Story was slated to open in theatres in December [it’s since been delayed]. I know that Harriet is now being picked up by HBO, so people will be able to see that as well in their homes. I’m very proud of all the work that’s in that as well. I am working on the upcoming production of MJ, which is the Michael Jackson story, and it’s a Broadway musical. While I’m resetting the production of Hamilton in Australia, I will also be working on MJ in New York.

Speaking of incredible costumes, Grace Kelly had many iconic looks. From your perspective as a costume designer, do you have any favourite Grace Kelly looks?
I reference Grace Kelly’s iconic images from her incredible career whenever I research costumes from the 50s and 60s. My favourites are probably the clothes that Edith Head designed for Rear Window and To Catch a Thief. One of my favourite looks is from Rear Window – she wears this traveling suit with a halter blouse and wide belt. It’s so classically 1950s and creates this image of a professional woman in New York, and she wears it amazingly well. She also comes in with the Mark Cross bag which is an icon in itself.
Thank you, Paul. Your incredible work truly is a tribute to Princess Grace’s legacy, and we are so honoured to have you as part of the Princess Grace Foundation family. Do you have any final words for the Monaco community?
I am always and forever honoured to be connected to the Foundation and in that, distantly connected to Monaco. I have visited there a couple of times and I’m eager to get back once we can all travel freely. I always feel wonderfully embraced by the Foundation’s work and support of young artists which is so very necessary at this time.