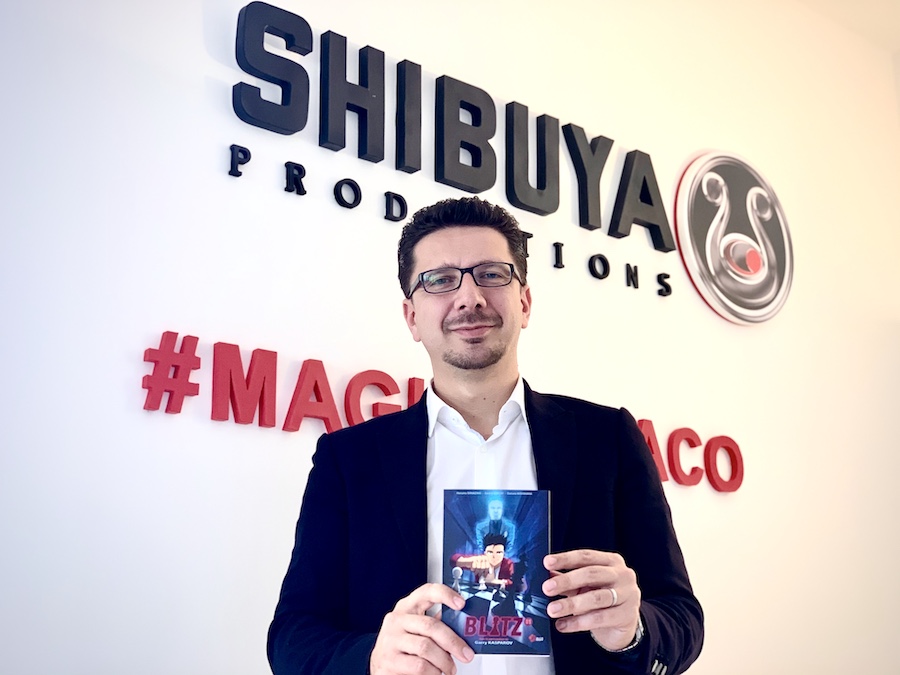 Cédric Biscay has just crossed off one of the top items on his bucket list: publish his own manga. Against all odds, this Niçoise native managed to not only collaborate with a Japanese artist on the book, he also convinced the world’s most famous chess player to join his Blitz team.
The founder and CEO of Shibuya Productions spoke to Monaco Life about where his passion for anime began, doing deals over karaoke in Japan, and how he managed to break three Guinness World Records without even trying.
Monaco Life: Where does your passion for production come from?
Cédric Biscay: Initially, my passion came from animation and video games when I was a kid, and everything I liked was from Japan. So, that’s the industry in which I ended up working!
So, you studied production then?
Absolutely not. I actually studied law, and I can tell you that it is completely useless to me now. If I wanted to play it safe in life, I would have stayed a lawyer. But in production, you need to bet, and as long as I am having fun, I am happy.
When did this passion turn into a career?
So it started with playing Japanese video games, then I decided I wanted to work with Japan – the birthplace of the gaming industry. But I didn’t have any money to enter production, so I started a consulting company in 2002 because I figured I understood Japanese people more than the average person.
The main problem is foreigners don’t understand the way Japanese people think, and vice versa. I became the middleman in all fields: rockets, chemical products, fashion, everything you can think of, between Europe and Japan.
It’s so successful I still have this company today, because it isn’t about knowledge. You can’t find what you need to know about Japan in a book – that’s why law for me is useless. Japan is so unique; everything there is about feeling.
After many years, I was finally able to get more money and I launched Shibuya Productions in 2014 together with my very good friend Kosta and we started to create and produce content.
Take us back to this relationship with Japan, do you speak Japanese?
Nope.
How do you create such a strong rapport with the Japanese without speaking their language?
I work as a samurai, so I do what I say. Apparently, it is not that common and this is the reason why I have always been accepted. It is also a weak point to speak Japanese as a businessman, because very few decision makers in Japan are able to speak foreign languages. If I come to them speaking Japanese and they can’t speak English, there is a situation. They are very happy if you can say a few words, like during karaoke or something, but if you are an entrepreneur, it is not ideal.
Karaoke? Is this important for your business relationships in Japan?
It is incredible, we actually sign 30% of our contracts during karaoke. If a business dinner goes well and you are invited to karaoke, it is a good sign.
It is not like karaoke here with lots of people in a restaurant or bar. In Japan, karaoke takes place in a private room with six or so other business people and contacts. There is a reason for everything in Japan – during karaoke you drink a lot and you are more frank; there is no ‘wall’ so it is easy to feel if a person is real or not. It is a kind of test.


Where does the name Shibuya Productions come from?
Shibuya is a fashionable young area in Tokyo, the famous crossroads where more than one million people cross daily. I chose the name because Japan is trying to be more open to the world and Shibuya is perhaps the most open zone of Japan.
For such a young production company you have an enormous number of projects either completed or on the go, from video games and anime to documentaries and tv series. How do you choose your projects?
I am not a businessman, I simply follow my passion. I do something if I feel it is what the market wants. In most cases, we have an idea and then we reach out to the creatives or we do it ourselves – some projects are 100% created in house.
Like the book Blitz, which was launched in February?
Blitz is an incredible project because yes, it is the first Monegasque manga, but more importantly it is very rare that a Japanese manga artist collaborates with a foreigner. Japanese artists are incredibly hard working compared to European comic book artists, they can illustrate and write a chapter of 15 to 20 pages every week. In France, the best-case scenario is one month. So, for that reason Japanese mangakas never want to collaborate. With Blitz, we also had Garry Kasparov, the greatest chess player in the world who not only gave his name to a manga character, he was our advisor on chess. At first, he was not interested in manga, but he understood that through this medium he can reach a whole new audience for chess. He can also reach the Japanese market through manga. Blitz is currently in Monaco and France, but we are looking to soon publish it in Japan and the US. 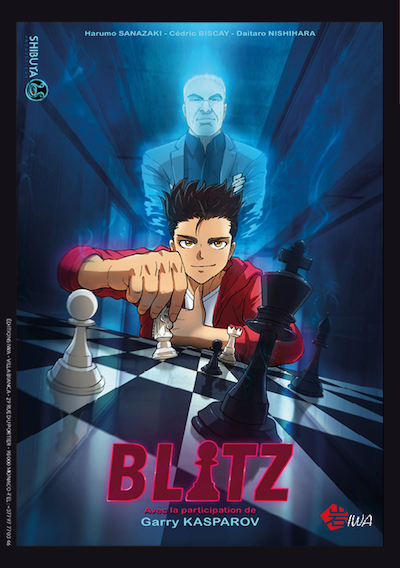 How did the idea for Blitz come about?
I just wanted to make a manga, but there is enormous competition in Japan and throughout the world, especially in France were there are 100 new titles released every week. It is the second largest market in the world for manga.
If we wanted to exist, we had to have something special. We found that in Garry, the guy that fought the machine like a terminator. We also had a special government advisor on intuition, Alexis Champion, who helped us write about the importance of concentration and instinct.
Why do you think manga is so popular?
The story telling in manga is an incredible skill of the Japanese. So many manga are themed on topics that people wouldn’t normally care about, like the Asian game Go, yet manga makes it popular worldwide and people buy it by the millions. That is what we are trying to do with chess. And that is why I think manga are the new Marvel comics.
Each year, your company hosts the Monaco Anime Game International Conference (MAGIC). Why did you create the event?
We wanted to celebrate the launch of Shibuya Productions with a gala so we invited many famous pop culture artists from across the globe. Almost all of them said they would come, so I figured we couldn’t just keep this for ourselves, we had to open it to an audience. Five months later, in 2014, we launched the first MAGIC, which serves as a networking platform for ourselves and is a free event for fans to enjoy. 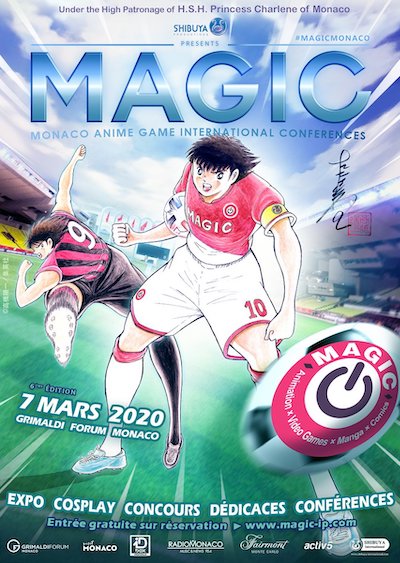 The poster this year was created by Yoichi Takahashi, the creator of Captain Tsubasa, the most famous soccer manga in anime. All the great soccer players are fans of his and this is the first poster he has ever made. The main character is dressed in the AS Monaco football jersey.
Other world-famous guests include Tadatoshi Fujimaki, Ayami Kojima, Koji Igarashi, Dave Gibbons, Michael Madsen, Jacques Vallée and William Simpson.
This year we also have the High Patronage of HSH Princess Charlene of Monaco which we are very grateful for.
Places are limited to 3,000 people, so everyone can enjoy the experience without it being too crowded. People must register first though for the 7th March.
You won three Guinness World Records without even trying. Can you tell us about that?
In 2015, we announced on the Sony stage at a US gaming exhibition that we would be releasing Shenmue III. It is a famous video game that was released in 1999 and 2001, but no one wanted to risk doing number III.
To raise money for the production, we launched a crowdfunding campaign. We got our first Guinness World Record for reaching $1 million US in record time, then another for achieving $2 million the fastest, then after 32 days of campaigning on Kickstarter, we made our third World Record by becoming the most crowdfunded video game in history, reaching a total of $6,333,295 US.
We released the game on November 19th 2019, on the National Day of Monaco, and incredibly it was one of the most awaited games in the world.

You also managed to get the rights to produce a new television series of Astro Boy, one of the most famous anime in history. What was that like?
That’s another crazy story. Never before has this Japanese company let a foreigner do anything with Astro Boy. But we created a new story, which is completely unheard of. In 2013 we were in competition with Disney to produce Astro Reboot. The reason why Disney didn’t get the deal is because we had a very good connection with the Japanese owner of the company. It is not always about money in Japan, trust is incredibly important also.
So, you are glad you didn’t stick to being a lawyer?
Our job is such a major part of our life. Do you want to have a boring life? I certainly don’t.

Note: Cédric Biscay is set to receive the Certificat d’Honneur du Ministre des Affaires Etrangeres Japonais during the opening ceremony of MAGIC 2020 on 7th March. The official dinstinction is decided by the Ministry of Foreign Affairs of Japan and being awarded because of Shibuya Productions’ exceptional work in facilitating and promoting the relationship between Japan and Monaco.