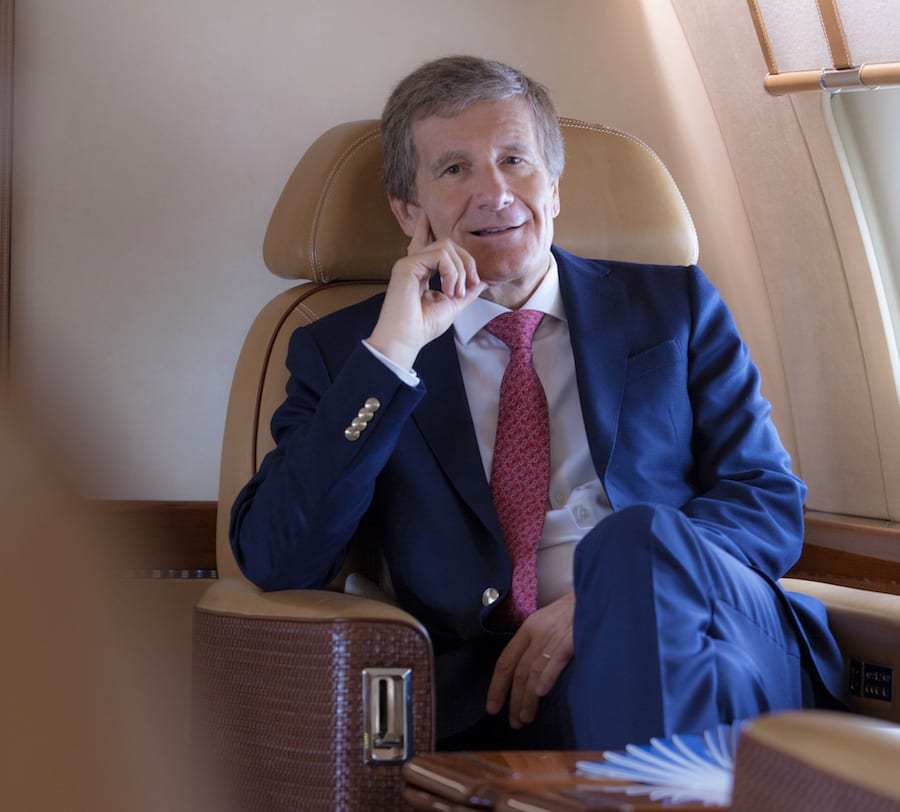 From racing the world’s fastest cars to selling the planet’s most expensive private airplanes, Thierry Boutsen has always been a man on a mission.

It is not something that he is eager to forget either. The Cannon Williams F1 car that the Belgian was driving when he won the Canadian Grand Prix in 1989 is proudly suspended on the wall of his office in Monaco.

But for the past 23 years, Thierry Boutsen’s acceleration has been in the air, not on a race track.

And while business took a nose dive during Covid, Thierry tells Monaco Life that things are gradually picking up in the aviation industry, with plenty of great deals to be had for buyers.

Monaco Life: When did your passion for flying begin?

Thierry Boutsen: I honestly had no idea that private jets existed until I was 18-years-old. I had just finished school and had two months off before going to university to study mechanical engineering. A family friend was CEO at Abelag (a private jet operator) in Brussels and he invited me to work there as a mechanic in the aircraft maintenance department. I enjoyed every minute of it – discovering these extraordinary flying machines. I was even invited on board to do a post maintenance test flight.That is when I promised myself, should I one day have earned enough money, I would buy and fly my own plane. I had to wait 12 years for that. Since then, flying has been a passion, like driving race cars.

When did your passion for flying turn into something more?

I had no intention of starting a company in the beginning. I was always flying my own plane from racing event to racing event, or marketing event to marketing event, for private or business purposes. Then I had a request in 1997 from a colleague of mine, former F1 driver Heinz Harald Frentzen, who wanted to buy the same plane I was using at the time but he didn’t know how to get it or how to complete the paper work etc. So, I said I would do it for him, and he ended up being my first customer. Immediately afterwards, I had a request from Keke Rosberg to buy a similar airplane for him; then I had to buy one for Mika Hakkinen, and then Michael Schumacher came to me and said he wanted to sell his Challenger. I did about 10 transactions, just in the racing world. I was doing the job as if it was for me – with a lot of passion, dedication and attention to detail. People loved it.

At the end of 2000 we had our first employee, Dominique Trinquet – who is still with us today and is now president of the company. We have nine people working with us here in Monaco, and we have representatives in India, Russia, northern Europe, eastern Europe and Switzerland.

How many planes have you sold since the company was founded in 1997?

We have sold 385 planes to date, and every time we make a sale, we celebrate it is a success for the whole team. Our team in aviation is like a racing team – everyone is working together to get the job done and using their capabilities to 100%, or sometimes even more. It will be a very important milestone when we get to 400, but it is due to the hard work of everybody of the company.

Do you have a typical client profile at Boutsen Aviation?

There is no such thing as a typical client. However, I would say that 50% of the deals that we do are with brokers who have their own clients that want to buy an airplane. The other half are heads of state, international companies or private individuals.

Can you tell us about the relationship you have built with the Princely Family as their official supplier of airplanes?

A few years after I started the company in Monaco, a contact at the Palace said to me that Prince Rainier would like to sell his plane and he asked if I was interested in cooperating with the sale. I of course said “yes, sure”. That was in the year 1999 and since then we have sold all of the airplanes that have been the property of the Principality.

How often in a regular year do you normally fly?

I was flying my own plane until about 2013 but then the business developed and I just ran out of time. You see, to be able to fly a plane safely you need to spend a lot of time in a simulator for training. Being in the office from 8am to 8pm every day, there is not enough time left for this kind of stuff. Since then, I have only been flying friends’ airplanes, which I did a couple of weeks ago and I really enjoy it.

Before Covid, I spent 350 hours a year on a plane flying for business, around two to three times a week.

What did it mean for you when lockdown hit Monaco in March 2020?

Our biggest markets are the United States, China and India, and the lockdowns in these countries started in December, so we lost our activity and customers from then on. Lockdown in Europe was just a consequence of that. When we went into confinement here in Monaco, we put all of our staff on temporary unemployment and we didn’t do any transactions between March and August. So, for us it was a complete shutdown businesswise. Dominique and I tried to keep ourselves busy so we didn’t disappear from the scene, but we were disadvantaged enormously compared to the US or other European countries which could continue working.

We lost a lot of time and opportunities between January and the end of July. Contracts that had been signed were cancelled because we could not deliver planes. We had two planes due to go to India for six months, and only one could finally leave because we couldn’t get the other plane into the country.

But we have been fully active since August. We delivered two planes recently and we have another four ready to go before the end of the year, hopefully. We are catching up, which is a relief.

How many planes are currently on your listing and what type of aircraft are they?

We have 16 planes for sale on an exclusive basis. We sell all types of business jets, but

70% to 80% of our planes are transatlantic, like Challengers, Gulfstreams, Falcons… big planes that can travel from Nice to Los Angeles, for instance. We also sell biz-liners like the Boeing Business Jet (BBJ) and Airbus Corporate Jet (ACJ).

Covid may have stopped people from flying, but people are now buying planes because of Covid, as the prices have dropped dramatically. The majority of pre-owned planes have fallen in value by as much as 20% in the last three to four months. So, opportunist buyers are entering the market now compared to three months ago.

How much money are we talking?

These planes used to sell for between 20 and 35 million. Today, it’s between 15 and 25 million for exactly the same airplane. This is because the inventory has increased. During lockdown, some people wanted to get rid of their planes because they had no need for them. A plane is expensive to buy and maintain, so if you have one that just sits in a hangar for six months, it’s not worth it.

What are your clients looking for when buying an aircraft?

The best price, comfort, space, quietness, and range. They want to buy a plane that can get maintenance anywhere in the world; some people want to fly to small runways, others want to go to the big airports, but mostly they use the aircraft because of the flexibility and the confidentiality.

Have you noticed any changes in client or customer demand over the past 20 years?

Yes, business aviation has become more common. Most of the big listed companies have their own planes. And not only one – they have three or four. Volkswagen, Swiss watch, pharmaceutical companies… they all have their own planes because they want to be flexible and well organised. So, when we are doing deals with these companies, we mainly speak with their flight department manager or director, who is there to advise companies on what to buy and when to sell. We are talking with professionals much more than 15 years ago.

You are an incredibly entrepreneurial spirit, so what is next for Thierry Boutsen?

Boutsen Aviation has been growing and developing, and we have taken quite a good position in the world market. But today we have absolutely no visibility into the future, so our priority is to work to maintain the level where we are at, with the amount of planes that we sell each year, and the quality of work that we deliver.

As the world economy is in chaos, we just want to keep our heads above water.

I am also the Chairman of the Boutsen Group which includes Boutsen Design, run by my wife Daniela, to offer a bespoke and individual design and decoration service for business jets, superyachts and residences. I also run Boutsen Classic Cars, sourcing and selling high-end classic road and race cars for discerning collectors. Then we have the Boutsen Racing Team, and we compete all over the world.

So, personally, I am trying to maintain the four companies to be in good operating condition and be as profitable as possible.

Italy next to receive first tranche of...

Business & Finance Cassandra Tanti - August 19, 2021
As part of its pandemic-recovery plan, the European Commission has given Italy €24.9 billion in pre-financing, money that will go towards the country’s green and digital transitions.

Business & Finance Cassandra Tanti - December 22, 2019
The hotel and restaurant sectors of Monaco have shown strong growth for the fifth year in a row.