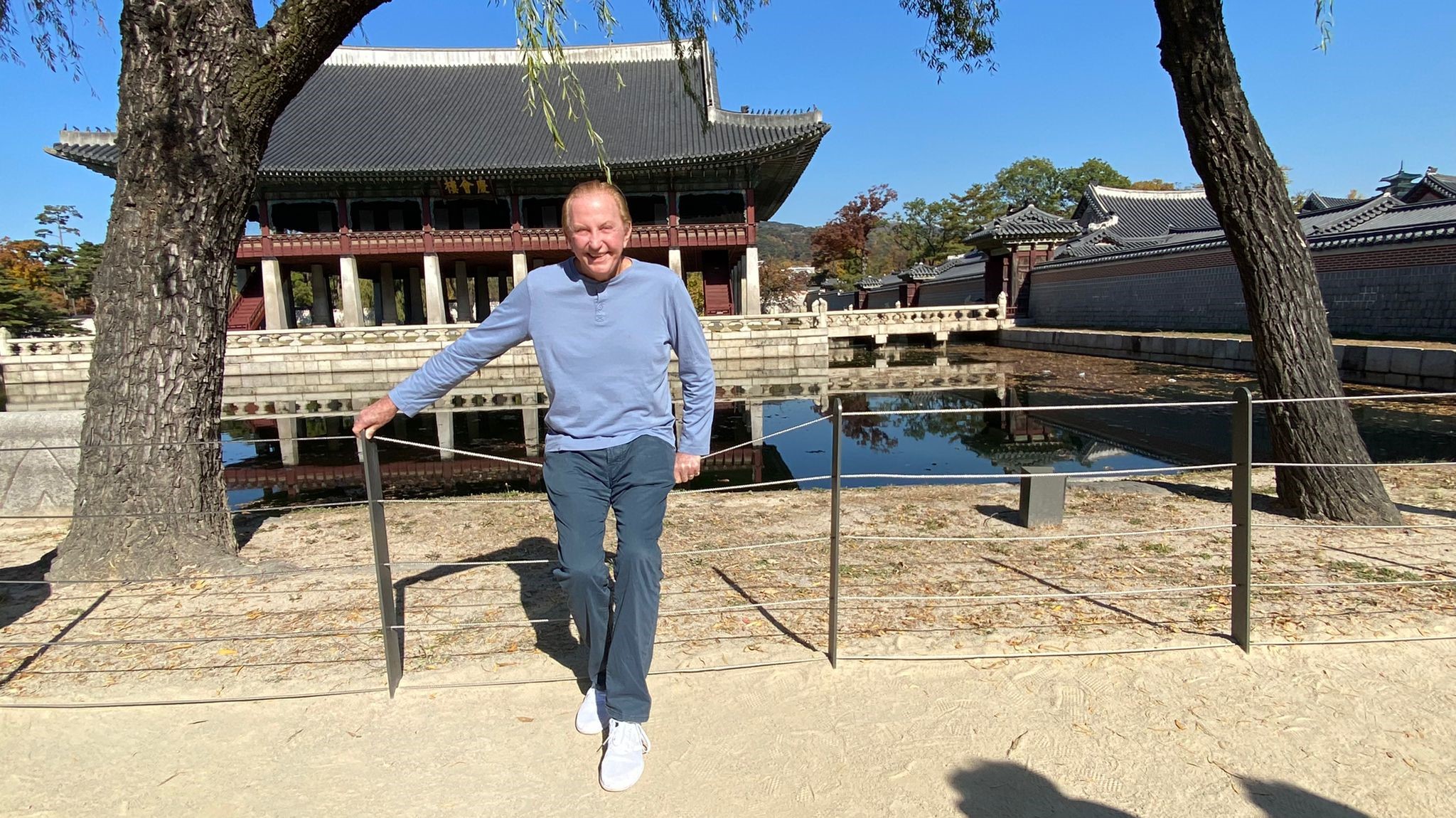 Geoffrey Kent’s apartment in Monaco is filled with exotic objects obtained from a lifetime of travel, large artworks inscribed by famous names, and young children’s toys scattered about the floor. There are also many photos – of Kent with princes and world leaders, of him posing happily in far-flung places, of a life that is almost too full to comprehend.

He has just arrived back from a big trip. Like every year, Kent has led guests for one of Abercrombie & Kent’s (A&K) luxury adventures. This time, Geoffrey, his wife Otavia, and 160 guests embarked on an extraordinary expedition through the rarely transited Northwest Passage.

“Do you follow my Instagram?” asks Geoffrey when I inquire about the trip. “Of course,” I respond. It is filled with pics from eye boggling destinations interspersed with snapshots of the past, a path twice (or more) trodden, a life lived to the absolute fullest. It is, perhaps, one of the most incredible Instagram pages out there. Not bad for someone who turned 80 in July.

The four-week voyage took them from western Greenland through the Canadian Arctic to Nome, Alaska. They followed in the footsteps of the most legendary polar explorers under the wing of A&K’s famed Expedition Team‚ including an Inuit cultural expert, while experiencing iceberg-laden shores, remote Inuit villages, historic islands and spectacular geological wonders.

It’s not without its comforts, of course. There is a staff-to-guest ratio of 1 to 1.3, balconies in every room, full butler service, room service, hairdresser, breakfast in bed and French-inspired cuisine. It’s also a rich learning experience with daily lectures on the local culture and environment. But I suspect the environmental lectures – and the trips themselves – have changed drastically in the past decades.

“When I last went to the North Pole in 1999, I was on a Russian icebreaker called Yamal, and each propeller weighed 10 tons. We crashed our way through 17 feet of ice all the way. It was an exhausting trip because the boat had to reverse and then smash its way in, you would make three feet, and it was like this all the way to the North Pole. On this trip, we were just 600 miles from the North Pole at one point and there was flat, clear, open sea. There’s no ice, we have lost it all.”

The crew had to navigate a last-minute alternate route just to find polar bears. They managed to see 15. It wasn’t like this even a few years ago, says Kent. “It used to be a complete fluke if you got through the Northwest Passage. We had a trip in 2018 which never made it through because of the ice. We also saw very few whales this time, they’ve been put off by all the mining along that route now.”

The glaciers feed the world’s river systems, and this year many cruise ships have been unable to access them; Europe’s mighty waterways like the Loire, Po and Rhine shrinking under the most severe climate-driven drought in decades.

It’s a far cry from what the world looked like when Geoffrey Kent started the safari company Abercrombie & Kent with his parents in 1962 in Africa. Of course, the world had other challenges then: A&K’s slogan was ‘shoot with a camera, not with a gun’. They pioneered experiential travel, created the first gorilla tracks in Uganda, brought adventure to luxury travel.

And Geoffrey Kent has been there for all of it. He has notched up 27 million kilometres and 161 countries. “We organise trips to all the places that I want to go to. I never like to go to a place twice. And I love it.”

So do his clients, apparently: 33% of A&K customers return every year to adventure with Geoffrey Kent and his team.

Just weeks after returning from the Northwest Passage, Geoffrey, Otavia and a group of 48 people have now embarked on an Around the World by Private Jet journey, boarding in Seattle with Dom Perignon and caviar on take-off, and making their way to South Korea. They had planned to visit the demilitarised zone between North and South Korea, but there was a significant escalation in tensions recently as North Korea fired missiles and artillery shells into South Korean territorial waters, so the UN shut down all access to the DMZ. Undeterred, the team regrouped and got as close as they were allowed: crossing the Civilian Access Control line where they were able to witness the destroyed Freedom Bridge, bullet holes still visible in the remaining structure.

The adventurous group then will travel in luxury to Hanoi and Ha Long Bay in Vietnam, on to Laos, the Maldives and Turkey where they will go hot-air ballooning over Cappadocia. “I actually took King Charles to Ephesus many years ago, when he was the Prince of Wales,” remembers Kent.

The tour also takes in Benin, West Africa, because Kent is “very excited about learning all about voodoo”, as well as north west Brazil – an area that can only be accessed by private plane. It will end with a huge party in New Orleans after 21 incredible days.

The privilege of travelling with this veteran is the access that it affords you – VIP entry into some of the most exclusive locations in the world, like castles. On his 2023 Spring trip to the United Kingdom, guests will tour Windsor Castle in London, race BMWs at the Goodwood race track, and learn polo at the Cowdray Park Polo Club, the former stomping ground of Kent and Prince Charles. They will then helicopter to Scotland, because “no expense is spared on these trips”, where they will visit Floors Castle, the home of his “old friend” the Duke of Roxburghe, and do a spot of fly fishing.

Geoffrey Kent and the new King of England have a long history; they have known each other since they were in their 20s. “I was captain of his polo team for 10 years,” says Kent. “I went to Africa with him, I did all the trips with him, everywhere: the Himalayas, Kenya, South Africa, India… everywhere.”

He considers King Charles a “very good friend”, so much so that the head of the British Monarchy sent Kent a congratulatory video message on his 80th birthday.

“He’ll be a great king. He’s very qualified. Terrific guy. Hopefully I will be able to go to the coronation next year,” he says nonchalantly.

It is just another remarkable tale in what has been, and continues to be, a remarkable life for Geoffrey Kent.

Though the countries he is yet to travel “are running few”, Pakistan is still on the bucket list. He would also like to see more of West Africa – Guinea and Timbuktu – and more of Iran.

But unlike a parent who is reluctant to choose a favourite child, Geoffrey Kent has no hesitation in revealing his most favourite place in the world. “Hands down Botswana,” he says. “Kenya is still amazing, east Africa, Tanzania, Uganda, we bought another two new camps in Namibia… it’s a whole new circuit, and it is something we do very well. I love the adventure.”

Before his trip to the South Pole, the savvy traveller sought the advice of Prince Albert II of Monaco, who is “a bit ahead of me in the number of countries he’s travelled to”. “But I took him some years ago to India, and I knew more maharajas than him because I used to play all the polo tournaments there with the Prince of Wales, so they knew me well.”

With great adventure comes great risk, and Kent says that he has had his fair share of near-death experiences: he was jailed for a week in southern Sudan during the explosive civil war, he was thrown out of a boat and chased by hippos, the landing gear failed on his small plane coming into an airport in Egypt, a pilot once ran off the runway to avoid an animal… and that’s all after surviving years of playing polo – one of the most dangerous sports on the planet, and fighting wars in Yemen, Libya, and Cyprus with the British Army.

“By the time I was 25 I had done a lot, which led me on to taking risks with travel,” reveals Kent. “So, I set up the company, but I would always try everything first.”

And that includes space. Having explored and designed trips on every continent of the globe, Kent set his sights higher and established A&K Space. But if he was to provide trips to the next frontier, he had to try it out himself. So, he flew in an English Electric Lightning plane to the edge of space at twice the speed of sound; it went from 0 to 40,000 feet vertically in a minute, his body hammered by 5.5Gs. The travel pioneer was 62 years old at the time.

“I thought it was a pretty hairy experience, and I remember calling my chief scientist afterwards to ask what the chances were of our space project having an accident. He said 100%. I said, ‘you are telling me there is a 100% chance of killing a client on this trip?’, and he said ‘yes’. So, I thought about it for a night and I shut it down, I let 20 people go. I shut down space long before everyone else started piling into it.”

That was 2004, and six months later his pilot was killed after the plane’s hydraulics failed during the same flight.

“A quote that I often refer to is ‘Life is not a dress rehearsal’, but my whole point is that I want clients to have fun, I don’t want them to die.”

I wonder what Richard Branson would say to that (Virgin Galactic has continually delayed the start of its commercial flights to the edge of space for various reasons).

Geoffrey Kent has documented his extraordinary life in a book he authored, titled Safari: A Memoire of a Worldwide Travel Pioneer. But the adventures continue – perhaps not to space, but still to all corners of the globe, where his team of experts design the most spectacular, once-in-a-lifetime journeys, imagined by the very man himself, travel pioneer Geoffrey Kent.

Photo above of Geoffrey Kent on his recent visit to South Korea, source Abercrombie & Kent