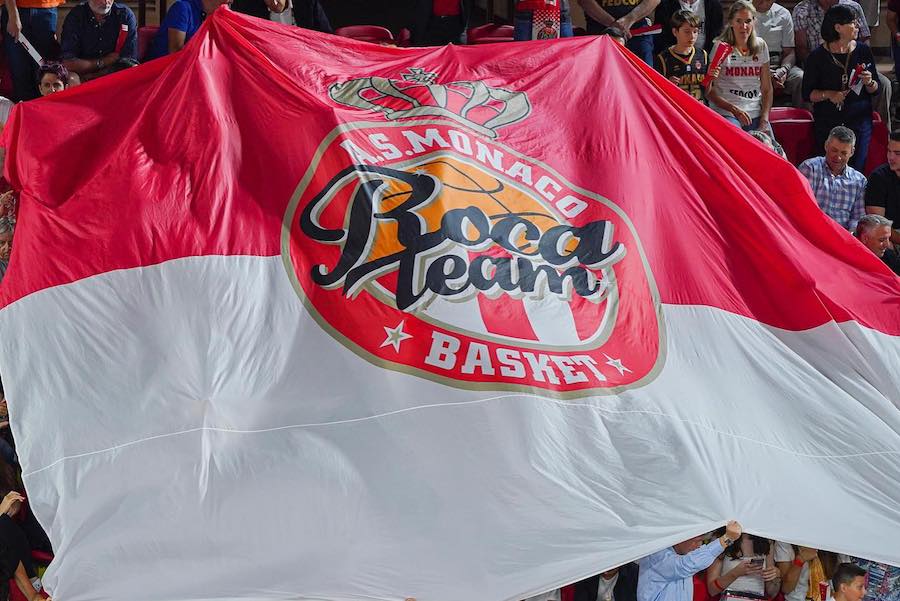 The AS Monaco Basketball team that takes to the court at the Salle Gaston Medecin next season will be scarcely recognisable to last season’s squad, which showed much promise, but delivered no silverware.

Just like last summer, director Oleksiy Yefimov and the rest of the recruitment team have plunged into the market. The Roca Team have already made six signings, whilst also tying down some of the club’s biggest stars to new contracts ahead of a season in which they will hope to build upon their impressive debut season in the Euroleague.

Elie Okobo – The architect of Monaco’s misery in the Betclic Elite final last year will not return to haunt the Roca Team this year. The French international has signed a two-year contract at Monaco, arriving from Asvel with whom he won the domestic championship last year.

The signature is a huge coup for Monaco. Okobo turned down approaches from European giants Real Madrid and Fenerbahçe to join Sasa Obradovic’s side. Speaking in a press release, Okobo said, “I joined Monaco because I saw their performances in the Euroleague last season. There are big objectives for this upcoming season – going further in the Euroleague and winning the French championship. I think I can play a part in this sense. I want to be part of such an ambitious project.”

Jordan Loyd – The American joins from Zenit, where he won the domestic championship with the Russian side. He completes a now frightening-looking back line alongside Mike James and Okobo. Like Okobo, Loyd also joins on a two-year deal.

Asked for the motivation to make the switch, he said, “There are many reasons. Clearly the ambition of the club was one of the major ones. The management directly made me a part of the season’s objectives and that immediately convinced me. I kept an eye on the team last year. Their combativeness in the Euroleague, the seriousness of the staff and of the management gave me the desire to join Monaco. The club has big dreams and I know we can achieve them. I can’t wait to start the season.”

John Brown III – The American winger arrives on a two-year deal from Brescia. He has a reputation as an aggressive defender and an energiser on the court. He also holds the record for the most interceptions in a Euroleague season.

Brown III began the season at Kazan before moving to Italy with Brescia following the outbreak of the war. Arriving in Monaco, he is looking forward to a change of scenery. Questioned on his move away from Kazan, he said, “It was a regrettable situation, especially since we had no control over that as players. So, we just had to make do… In the end, I managed to return to Italy, where I had begun, so it all concluded in quite a satisfying way. Now, I am opening a new page in my career at Monaco and I’m very excited!”

Jaron Blossomgame – Another American added to the Roca Team’s armoury, Blossomgame arrives from German club Ulm on a one-year deal. A versatile player, he can play in the no.3 or no.4 roles. He arrives off the back of a good season in Germany, where he earned himself a place in the Eurocup team of the season.

Like many of the new signings, Blossomgame was also inspired to join the club due to their impressive exploits in the Euroleague last season, but their transfer activity was also a source of motivation. He said, “I closely followed their journey in the Euroleague, with that beautiful performance, which left them just short of a place in the final four. For the upcoming season, with the new signings in recent days, you see that the club has very big ambitions.”

Matthew Strazel – 19-year-old point guard Strazel arrives on a three-year deal from Asvel. He adds further depth to a forward line, which includes James, Okobo, and Loyd. The young Frenchman also featured in that Betclic Elite final against Monaco.

Reflecting on that victory, he said, “It was without doubt the most contested series I have ever played in. The season before, we were champions, but it was in a bit of a complicated format. For my first real play-offs, it was a series of extreme intensity between two teams, who didn’t want to give up.”

Questioned on his objectives for the upcoming season, he said, “We want to go further than last year by winning a French title and reaching the final four in the Euroleague. I think we have the capabilities to do it.”

Adrien Moerman – The veteran Frenchman arrives on a one-year deal with the option for a further year from Euroleague champions Anadolu Efes. Having won everything during a four-year spell in Turkey, Moerman is looking forward to a new challenge.

He said, “Monaco responded to all of the expectations that I could have. It is a team that wants to really grow and target the top level. On a personal level, I really wanted to play Euroleague. At 34, I still have the desire to challenge myself physically. I feel good, without any physical issues and I really wanted to take on this challenge.”

Mike James – The star man has extended his stay in the Principality. The American point guard, who was shortlisted for Euroleague player of the season, has signed a two-year extension with the side. Monaco’s stand out player scored at least 20 points in 13 games.

Alpha Diallo – American Diallo has signed a three-year extension at Monaco, where he impressed last season. Obradovic leaned heavily on his defensive efforts, and his absence from the court was often felt.

He said, “My choice to continue my career in Monaco is based on my hunger to be competitive and to win titles in the French league and also in the Euroleague. I think Monaco has a big chance to fight for titles and that’s why I’ve extended. In addition, the ambition will be to improve the team, be there for each other and to continue fighting for the trophy.”

Yakuba Ouattara – The Frenchman is set for his seventh season in Monégasuqe colours. After arriving in 2015, Ouattara has been a mainstay of a Roca Team that has grown exponentially. “I chose to stay because Monaco is my home, began Ouattrara. For me, I am at home around this club where I have grown up and where I know everyone. I have always had a special relationship with the staff, and clearly with the fans too,” he said.

Donta Hall – Fellow American Hall has also been extended for a further three years. The pivot grew in confidence as the season progressed and his influence under the board was pivotal in many matches.

Will Thomas – Called “the glue” by Yefimov in an interview with Monaco Life. The American’s Monaco adventure has come to an end. After just one year at the club, he departs to join Spanish side Unicaja CB.

Rob Gray – Gray departs after two years in Monaco. He was an important part of the club’s successful EuroCup campaign in the 2020/21 season, but his influence waned in his second year at the club. He joins Tofas Spor Kulübü.

Danilo Andjusic – The Serbian leaves after just one year in the Principality. He returns to his native Serbia to join KK Partizan.

Paris Lee – Lee departs after one season at Monaco, in which he lit up the court of the Salle Gaston Medecin. The American was a key element of Monaco’s success last season, but desiring a more prominent role, he has made the move to Greek side Panathinaikos.

Wilfried Yeguete – The Frenchman has been at the club since 2019, but didn’t feature for Monaco last season. He joins Betclic Elite rivals Limoges.

Jerry Boutsiele – Boutsiele has left the club after one season. The Frenchman struggled for gametime after arriving from Limoges, but showed his worth in the back-end of the club’s Betclic Elite campaign. He joins Turkish side Bahçesehir Koleji Spor Kulübü.

Last year’s squad overhaul took Monaco to the next level, as they defied all expectations to reach the Euroleague play-offs. By bringing in a wealth of Euroleague experience and some of the most exciting homegrown talents, Yefimov will be hoping that this year’s recruits will have a similar impact and take the club to the next level.