Writing has always been a passion for local figure Mike Colquhoun. And from the day he happened upon a bookshop in St Paul, Minnesota, and discovered Kafka at the age of 13, he has enjoyed labyrinthian surreal worlds.

“Born in England, I was transplanted as a child to a military academy in the US to lead a transient life,” Mike says.

Mike’s early life led him to follow an unpredictable path. In his late teens, he became a mural artist in Switzerland before returning to England where he qualified as an accountant and then became a hybrid in IT and design. Throughout, he continued painting, doing stand up comedy, improvisation and cartoons and so when an opportunity arose to pursue his genuine interests, he didn’t hesitate. 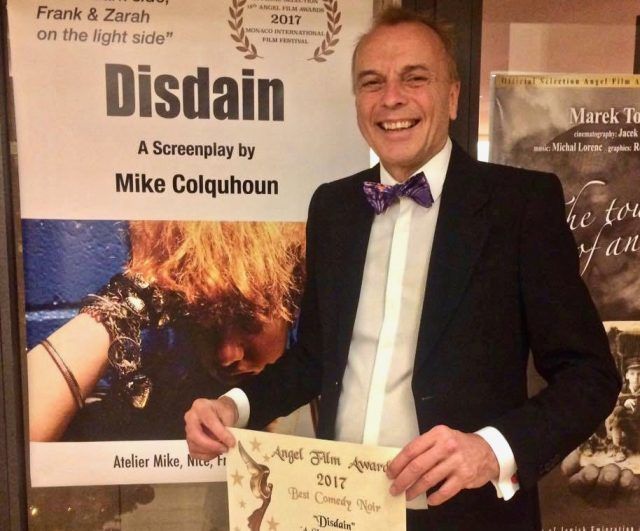 Mike recently published a book of poetry from his work over the past five years. “Words, often poems, are integral to my painting,” the former stand-up comic explains. He also published his first novel, Continuum, as well as a “remastered” book of cartoons and adds “another book or two are waiting in the wings”. He has won awards for two animated movies and another screenplay, Disdain.

Last year, Mike wrote the play Jennifer about a young woman seeking a life change and is thrilled to have an interview with the mega rich Charles, to be his personal assistant. The story begins there. After we meet the investigative journalist Camilla.

“I am not a hobbyist so I never do anything unless I can see an outlet, and am fortunate to have many connections in the world of entertainment, call it synchronicity.”

For Jennifer, which opened last weekend at la Passerelle in Nice, Mike called on people he met in the past. He’s known Suzanne Kendall, the lead – “and a very talented and versatile actress” – thanks to the Angel Awards Monaco International Film Festival.

“Suzanne narrated my script on the Heart, which has won three awards so far and is in the June Concrete Dream Festival in LA.”

Catherine O’Reilly, an accomplished actress and a barrister, plays Camilla and French performer Nicolas Carré’s role as Charles is the first the singer/actor has ever undertaken completely in English.

“As an artist you are forever vulnerable,” Mike admits. “It’s rather like having a wound and letting people poke it – it can be painful. But I like live entertainment and if I’m given a choice between a movie and watching something on stage the stage will win.

“As I say, I am not a hobbyist so producing things for my own satisfaction is not something that works for me and so I produce with an audience or an outlet in mind.”

When Mike’s not writing or listening to live music at Le Borghese, Shapko Bar or Le Ketje, the Monaco Air League member can be found at coffee mornings every Sunday, which he originally organised as a Meetup. “Now it’s a kind of institution, attended every Sunday for the past five plus years in Nice by some 20 to 50 different people each week. It’s a way of putting folks together to make new friends and get the most out of where we live.”

From a restaurant headed by Mauro Colagreco to an elegant outdoor ballroom, here is what we know about The Maybourne Riviera, coming soon to Roquebrune-Cap-Martin.

The GP and art: ‘Masters of Monaco’

Alan Walsh is exhibiting a new collection of works at his Monaco gallery featuring 16 Formula One greats, just in time for this weekend’s big event, the Monaco Grand Prix.

This is what lunch looks like when the most Michelin starred chef in the world pairs up with the leader of Modern Cuisine.

Larvotto beach will reopen to the public this July, featuring a new look and the return of old favourites. Meanwhile, the government is looking for businesses to fill seven new spaces.

Admirers of Anglo-Irish designer Eileen Gray are invited to visit her masterpiece in Roquebrune-Cap-Martin, Villa E-1027, which has been painstakingly restored to its former glory.

The Monte-Carlo Comedy Film Festival has concluded with a gala award ceremony honouring the best of the best for outstanding achievements and for making people smile.

Cendrillon by Jean-Christophe Maillot. Photo: Alice Blangero[/caption] No strangers to Switzerland, Les Ballets de Monte-Carlo were invited for the first time to the Opéra de Lausanne from January 19 to 21. The last visit of the Company to the city was in February 1996 at the Palais de Beaulieu, with a programme of "Ballets Russes": Scheherazade, The Prodigal Son and Prince Igor. Last week’s three performances of Cendrillon, with choreography by Jean-Christophe Maillot, a play created in 1999 and danced more than 200 times across the world, received an ovation each evening from the Swiss public. The Monaco Tourism and Convention Bureau, represented by its communication department, organised the Premiere evening, a successful operation with the Swiss press and their MICE guests. [caption id="attachment_27482" align="alignnone" width="640"] 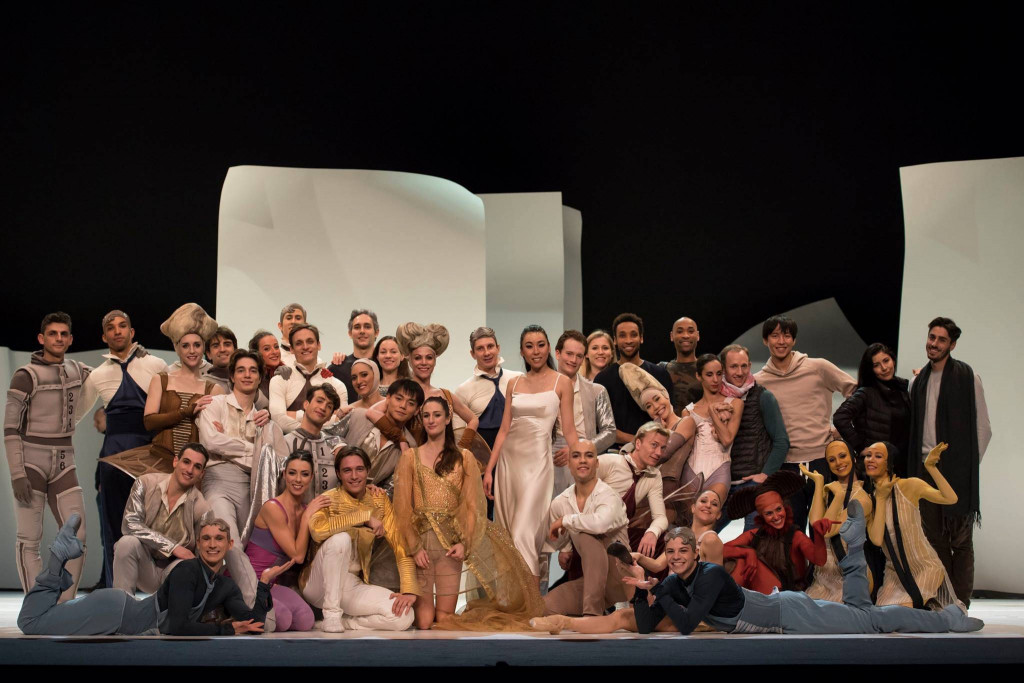 Opening night of Cendrillon in Lausanne. Photo: Alice Blangero[/caption] During the performance on Saturday, January 20, Maison Chopard, a partner of the Ballets de Monte-Carlo, honoured the Company during an exceptional evening organised by its co-president, Caroline Scheufele, and in close collaboration with the Director of Chopard Monaco, Xavier Fuller. During the same week, Jean-Christophe Maillot, Choreographer Director of the Ballets de Monte-Carlo, Bernice Coppieters, Principal Ballet Master, and Bruno Roque, former dancer of the company, worked with the Ballet de Flandres in Antwerp, Belgium. Maillot's Faust, created in 2007 with the Ballets de Monte-Carlo, is currently in the Ballet de Flandres repertoire, and will be presented again until January 28, at the Stadsschouwburg Antwerpen for six performances.

Culture Stephanie Horsman - April 7, 2021
A Monaco charity was able to provide for the life-saving surgery of 12 children in 2020, a third of the operations performed in 2020 but an incredible feat in a year impacted by Covid.