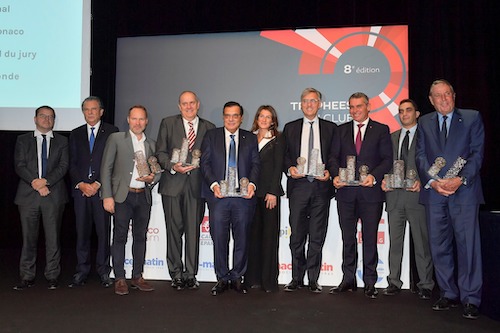 Seven of Monaco’s leading business people have received the prestigious Monaco Eco Club Awards 2019, including the heads of the Monte-Carlo Bay Hotel & Resort and the Automobile Club of Monaco.

The awards, organised by the Monaco Economic Board (MEB) in partnership with the Nice-Matin Group, were held on Tuesday evening at the Grimaldi Forum and brought together the major players in Monaco’s economy.

Minister of State Serge Telle presented the Special Prize to Michel Boeri, President of the Automobile-Club of Monaco (ACM), which recently celebrated its 90th anniversary, for the Monaco Grand Prix.

“The Grand Prix is ​​indicative of the love story between the Principality and millions of motor racing fans,” said Mr. Telle. “It is also the beautiful story of a country that prepares, lives and dismounts the Grand Prix, animated by all the heart and talent of the ACM and its teams in making the event a success.”

In accepting his award, Michel Boeri recalled the significant financial contribution that the GP makes to Monaco, saying: “The Grand Prix has provided official economic benefits to the Principality in the order of €90 million, to which should be added another €30 million generated by other ACM races. And then there’s the international visibility estimated at one billion viewers.”

This, the 9th edition of the Monaco Eco Club Awards, saw the creation of the new

International Prize of Influence which was awarded by Minister of Finance and Economy Jean Castellini. The recipient was Opéra de Monte-Carlo Director Jean-Louis Grinda for serving as an ambassador of Monegasque cultural excellence on the biggest stages of the world, for working with leading theatres across the globe and for producing a successful tour of Cécilia Bartoli and the ‘Prince’s Musicians’. Mr. Grinda has also been chosen to lead the prestigious Chorégies Orange Festival.

He has overseen a number of key initiatives including the opening of seaside facilities, the creation of the Rafael Nadal suite, the influence of the Michelin star restaurant Blue Bay and its chef Marcel Ravin, the installation of the most powerful solar power plant in the Principality as well as a supercharger, and also the successful implementation of a management system which has increased turnover at the resort by 10% over the past three years.

“I am very proud to receive this award which I dedicate to my colleagues, because a manager is nothing without his team and the confidence that they show in him every day by giving the best of themselves, for the satisfaction of a demanding clientele and to support the vision of the Société des Bains de Mer: to offer the most exclusive experience in Europe,” said Frédéric Darnet.

Other entrepreneurs from the Principality to be rewarded for success in their fields and for promoting the Monegasque economy were Roland de Rechniewski from Monaco Bus Company who received the Sustainable Development Award, Rachid Benchaouir from Coraliotech who received the Innovation Award, the Mercure International Hotel of Monaco’s Adnan Houdrouge was given the International Award, and Cruiseline’s Pierre Pelissier was awarded Made in Monaco.