A high-level conference and interactive exhibit, “(Zero Gravity) 0G Summit – Space Diplomacy in the Age of NewSpace” announced its mission to make Space the New Frontier for Peace during the prestigious 2017 Concordia Annual Summit, on the sidelines of the General Debate of the 72nd Session of the United Nations General Assembly on September 19.

Monaco resident Namira Salim co-chaired the Summit, her brainchild, which is the lead initiative of her non-profit, nonpartisan organisation, Space Trust. The event was co-chaired, moderated and hosted by Dr Lance Bush, President & CEO of Challenger Center.

“This year’s 0G Summit dialogue reinforced the importance of the space industry and the benefits it offers to citizens around the globe,” said Dr. Bush. “To ensure the industry continues to innovate at a high level, it is critical that we all work to inspire today’s students to pursue space and other STEM-related careers.”

Namira is internationally renowned as the first (future) Space Tourist from South Asia, Middle East and Monaco to go to space aboard Virgin Galactic—the first private space-line of the world. Sir Richard Branson, Chairman Virgin Group, personally introduced Namira to the world press in Dubai in 2006, as one of the earliest Founders of Virgin Galactic.

“As spacefaring and new space nations expand cooperation via human and robotic missions, the world is on the verge of ushering Space ‘Shuttle’ Diplomacy,” said Namira Salim. “So, why not open space to world leaders and politicians to utilize the orbit for sustainable peacemaking and conflict resolution on earth?”

0G Summit 2030 is being observed by United Nations Office for Outer Space Affairs (UNOOSA) and was presented this past February in Vienna at the 54th Session of the Scientific and Technical Sub-Committee of the Committee on the Peaceful Uses of Outer Space (COPUOS).

The (Zero Gravity) 0G Summit, has been advocating the first peace summit in orbit by 2030. The International Space Station has become a beacon for international cooperation in space—where future commercial space stations in orbit by the mid-2020s could serve as a concrete platform for convenings in zero gravity.

Namira is an avid promoter of Private Spaceflight, the new age of space exploration and a keen advocate of peaceful uses of Space. She has undertaken pioneering peace expeditions to all three poles of the world, and is the first Pakistani and first woman from Monaco and the UAE to have reached the North and South Poles in 2007/08, as well as the first Asian to skydive (tandem) over Mount Everest in 2008.

Namira holds a Master of International Affairs from Columbia University. She is a regular speaker at top space industry events and UN Conferences and has held official peace-themed exhibitions during the United Nations General Assembly in New York, UNESCO’s Executive Board in Paris and OIC Day at UNESCO and several events under the Patronage of Royalty from Monaco and Dubai. Namira has served as an Honorary Ambassador for Pakistan and Honorary Consul in the Principality of Monaco, where she has been based for 20 years. 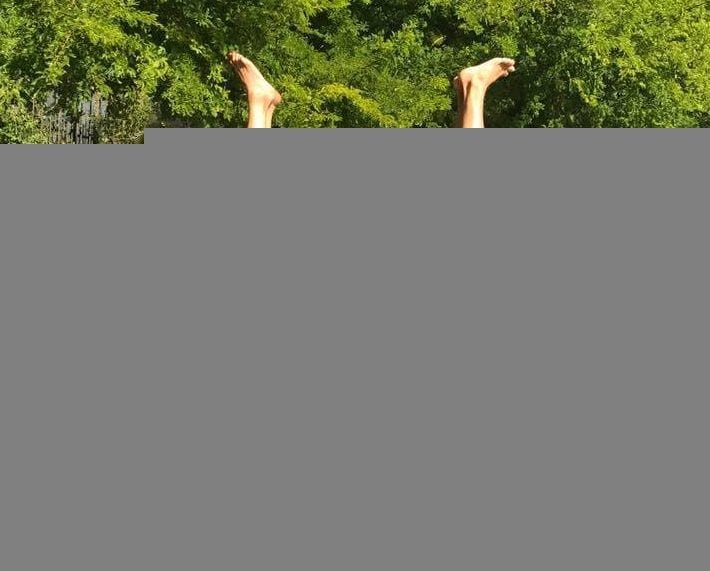 Photo: Facebook Maddywell[/caption] A few weeks ago, I was fortunate enough to take part in a day yoga retreat in a beautiful property in Cannes. The ad on Facebook caught my eye, a combination of a majestic venue and an exciting yoga experience. I signed up and off I went to Cannes on a Sunday morning. An imposing gate greeted me and led up through a stunning garden to meet my fellow yoga retreat participants, our teachers and our wonderful host, Eleonora. As we all gathered in the gorgeous room that was going to serve as our yoga studio for the day, we were served some beautiful colorful juices that were provided by none other than our hometown vegan joint, Eqvita. The crowd was a mix of all nationalities, including Italian, French, Russian, English and a Swedish/Czech (me!). It was inspiring to meet new people who shared the same desire to spend a Sunday doing something good for the mind, body and soul. Our first class of the day was a strong vinyasa practice – hugely popular in the US, it’s a flowing, dynamic sequence of poses – that was led by @behranyoga who had travelled all the way from Turin to teach our group. Apart from sun salutations and warriors, we also practiced some headstands and core firing exercises like crow and Lolasana. By the end of the hour, we were all pretty cooked and were glad to enjoy a little resting meditation, what we refer to in yoga as Shavasana. We were then guided through the spectacular grounds and into the magnificent dining room in the main villa for some lunch. Quinoa, vegetables and smoked salmon as a main followed by, in typical French style, fromage, which in this case was a cream type cheesed topped with berries and nuts. The final course was a pear dessert that totally hit the spot. It was nice to see bottles of rosé and white wine on the table but they mostly went untouched.   [gallery size="full" td_select_gallery_slide="slide" ids="22611,22613"] After lunch, we made our way back to our makeshift studio for a Yin yoga class led by Sara (Saraswati) Korbanka. Sara had an unusual childhood, growing up in an Ashram in India but has brought back her wisdom to her native Europe where she now teaches yoga in Antibes. Yin yoga is very much about relaxing the body and surrendering into poses, a real contrast to the dynamic pre-lunch session. As a very active A-Type personality, Yin yoga is a real challenge for me because it requires me to stop trying to do stuff and to just be. It’s often the challenging things that we need the most. So instead of resisting, I just do it as I know it will benefit me in more ways than one. Being able to stay calm and to surrender instead of reaching maximum stress levels in thirty seconds or less is definitely a skill you learn through meditation and Yin yoga. Once our group was chilled, it was time for our last yoga session of the day: aerial yoga. I had never tried this before but it basically involves doing yoga postures in hammock style “silks” that hang from the ceiling. We were fortunate enough to practice in the garden so our hammocks were hanging from the trees next to the pool, which made it a pretty epic setting. Our teacher, Nadège, came from Antibes and was absolutely brilliant. I loved aerial yoga … and everything else we experienced that day. Driving back to Monaco on Sunday evening, I felt as if I had been gone for a week. To find out about next events please visit the websitewww.eluxom.com/bookings or follow on Facebook contact.eluxom and Instagram eleonora_eluxom. Prices start from 95€ per person/day, all the classes and lunch included. [caption id="attachment_22363" align="alignnone" width="720"] 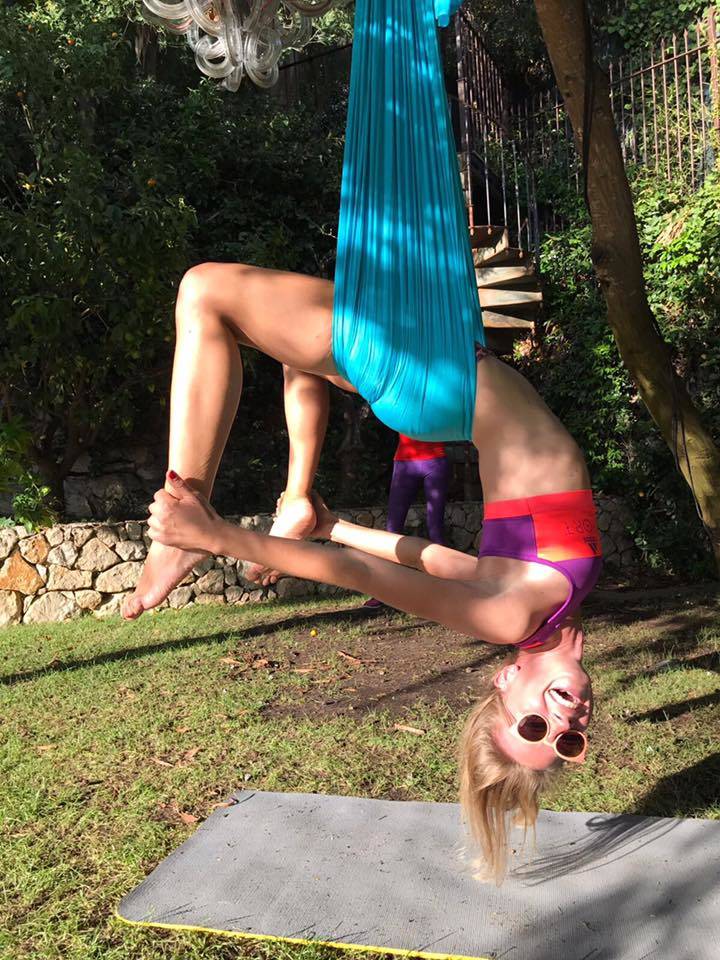 Aerial yoga. Photo: Facebook Maddywell[/caption] Article first published September 28, 2017.Maddy is the Founder of Nutrition For Naughty People, aimed at helping individuals find a better balance between the things that keep them healthy and the things that make them happy! Any questions? mk@nutritionfornaughtypeople.com.

RELATED ARTICLES: TO BE Organic is never a question in Monaco 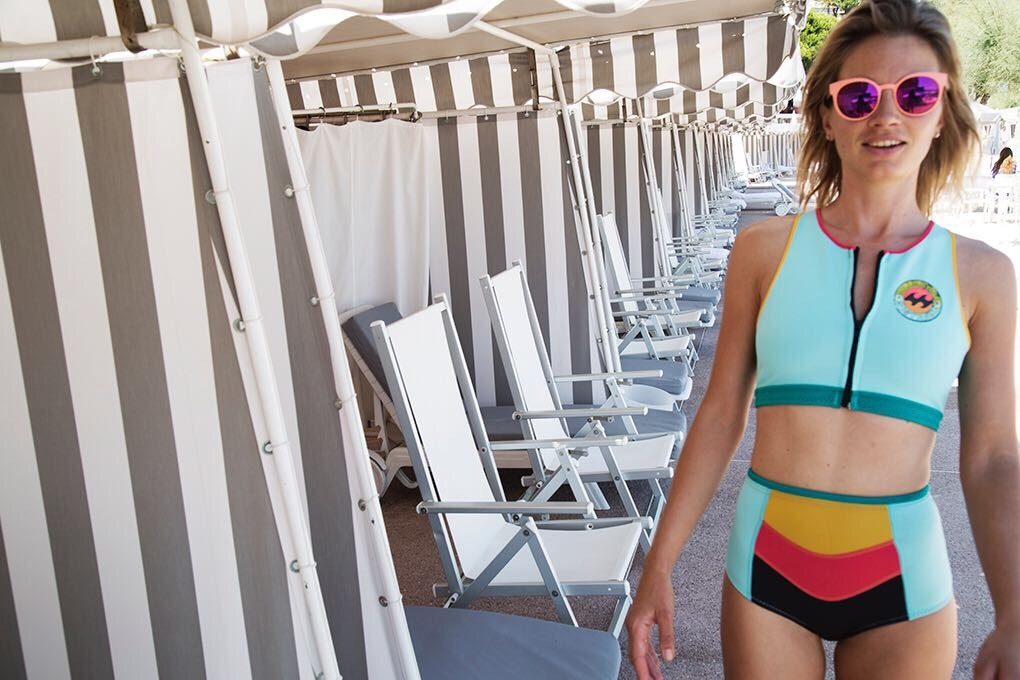