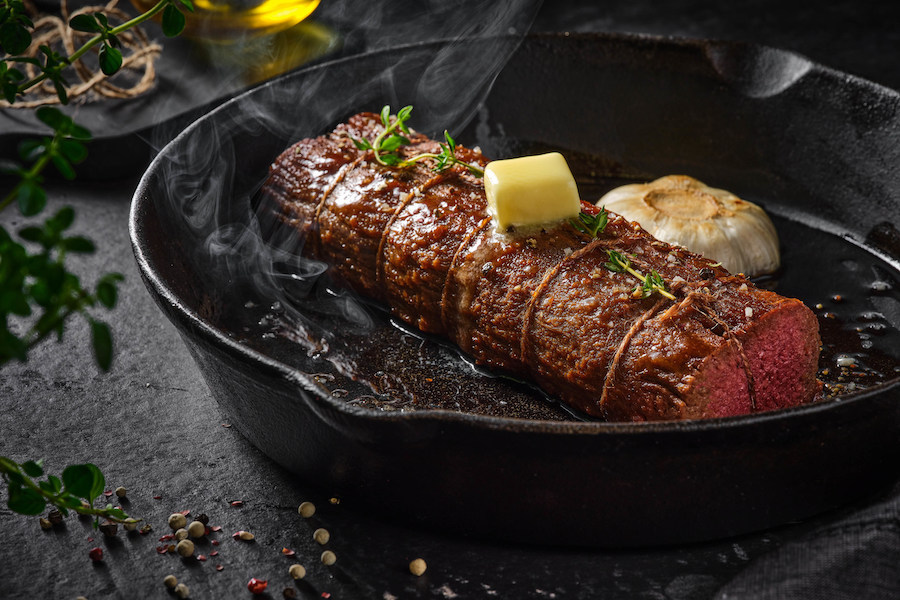 Redefine Meat has spent years studying the unique properties of animal meat and believes that it has perfected cutting edge technologies – including 3D food printing – to develop plant-based products that “provide the full sensory experience of meat, including flavour profiles, texture and aroma, without compromise.”

The start-up raised €170 million in a series A financing round this year and operates large-scale meat printers at its Rehovot headquarters south of Tel Aviv, and a new factory in the Netherlands, hoping to establish its products as an alternative to conventionally produced meat.

It’s New-Meat range includes minced meat products, premium muscle cuts, and an entirely new category of pulled meat – beef, lamb and pork. Many of the products are already being served up by leading chefs at hundreds of restaurants, hotels and other foodservice locations in the UK, Germany, the Netherlands and Israel. In Israel, they are also commercially available in retail channels such as butcher shops.

As Europe’s largest importer of high-end meat, Giraudi Meats is marking an historic milestone with this collaboration. The company has a presence in over 30 countries and an industry-leading sales, marketing and distribution network in hospitality comprising over 300 meat distributors and wholesalers. With this partnership, Giraudi Meats plans to drive the rapid expansion of New-Meat across European food services – starting with France immediately, followed by Italy, Greece and Sweden later this year, and dozens more countries to follow.

“Working intimately with the European food services industry, we’re seeing fast growing demand for more flexitarian products to satisfy the needs of meat-lovers,” says Riccardo Giraudi, CEO of Giraudi Group. “We’ve been searching for a high-quality meat alternative to add to our high-end meat portfolio to address this growing market, and I have to say that New Meat is in a category of its own. We believe that with this level of quality, combined with the product versatility across beef, lamb and pork, New-Meat will enable us to drive significant new revenue streams in the high-end meat market.”

Giraudi Meats will distribute New-Meat to its existing customer base, as well as prospecting new customers to sell Redefine Meat products. It will also add New-Meat products to the menus of it’s chain of Beefbar restaurants across Europe, including where it all began – here in Monaco.

Endorsed by world-leading chefs, the people behind New-Meat say that it achieves what was previously considered impossible in the culinary world: plant-based products with a level of quality suitable for high-end chefs and butchers.

“The synergies between Redefine Meat and Giraudi Meats lays in our love and passion for meat, and the uncompromising shared vision to serve the world only top-quality meat,” says Eshchar Ben-Shitrit, CEO and Co-Founder of Redefine Meat. “Having such a prestige meat importer as Giraudi Meats – working with the best chefs and butchers all over Europe – integrate our New-Meat into its portfolio of exclusive high-end meat alongside the likes of Angus and Kobe beef, exemplifies why New-Meat is defining a new category of high-end product in the meat industry. Giraudi Meats’ proven track record of creating new categories in the European meat market and its ability to continuously change and innovate makes it a great partnership, which will significantly accelerate the proliferation of New-Meat across Europe.”

It was recently described by legendary chef Marco Pierre White as “one of the cleverest things I have ever seen in all my years of gastronomy”.

“I wanted to collaborate because when I tried the product I was totally amazed.”

Monaco Life: As a high-end meat importer who knows good meat, and assuming you have tried the New-Meat products – what is it about them that made you want to invest in this partnership?

Well, first of all, when I first saw Instagram posts about New-Meats I was extremely curious and wanted to learn more. We met via social media with the owner, funnily enough, and I just thought it was a great addition to my meat portfolio, as yes, I do specialise in high-quality meats and logically, at this point in time, plant-based meats are clearly also a small portion of the “meat” business. But the most important reason why I wanted to collaborate is that when I tried the product I was totally amazed. It is something totally different than what there is currently on the market. It’s so much more forward, clean and simply delicious. I am very difficult with my suppliers selection in the meat or in the plant-based meats division, as I want only to excel in my portfolio.

This is obviously a smart business decision on your part – given the perilous nature of the future food industry – but it is also a win for the environment. Is that how you see this collaboration?

Yes and no. I am more of an entrepreneur who sees a demand for this type of new movement and I try to fulfill such a demand. I am also very creative and I think I can educate our distributors via our restaurant structure, which is key. The fact that it’s good for the environment is extra, but I see myself more of a “lets bring something new to the market” kinda guy.

How long do you think it will be before we really see plant-based meat alternatives like this alongside meat based products in all hospitality sectors in the world?

Many European countries, such as Germany, or the UK are much more ahead of southern countries when it comes to serving plant-based meats in their menu. I think it’s a cultural choice, and I think it will follow the same trend as high-quality meats. It took us a long time to get there, but once we get to the final consumer and they are happy with the progress, they definitely come back. I definitely think, having tried myself these products, that it’s a new type of protein coming to the market. You can consider it as a new meat category.

And finally, the last time we spoke you were planning on opening the Leafbar this summer – do you have an update on that project for us?

Absolutely. It took us a lot longer because we decided to make the restaurant bigger. We had to acquire the unit next-door and of course, as you know, it takes a lot of time with regards to the building permits. We just wanted to do things well. But I can officially tell you Leafbar will open before summer next year!