The list of event cancellations in Monaco due to the coronavirus is growing. The latest include a key aspect of Monaco Ocean Week and artemonte-carlo at the Grimaldi Forum.

According to the Prince Albert II of Monaco Foundation, the Monaco Blue Initiative (MBI) organising committee has received several cancellations from participants of the 11th edition scheduled to take place on 22nd and 23rd March 2020.

Faced with this situation, the organising institutions have regretfully decided to cancel the 2020 edition of the Monaco Blue Initiative, a high-level discussion platform gathering numerous international leaders from the political and ocean spheres.

The Monaco Ocean Week, scheduled for 23rd to 28th March 2020, is for the time being maintained. This federating event organised by the Prince Albert II of Monaco Foundation, the Prince’s Government, the Monaco Oceanographic Institute, the Monaco Scientific Centre and the Monaco Yacht Club will gather more than 40 events throughout the week, bringing together ocean players around topical issues such as food security, sea level rise, ocean acidification, sustainable yachting, the preservation of coral reefs, global warming and ocean innovation.

Meanwhile, Monaco’s main exhibition facility, the Grimaldi Forum, has announced further postponements and cancellations. Artmonte-carlo, initially scheduled for 1st to 3rd May 2020, has been postponed to 29th April 2021.

The One to One Retail E-commerce event, due to take place on 17th March, has been postponed to a new date – yet to be confirmed.

And the IOC World Conference on Prevention of Injury and Illness in Sport, initially scheduled for 12th to 14th March, has been put back to 3rd February 2021.

It was previously announced that the Aesthetic & Anti-Aging Medicine World Congress – AMWC and the James Bond – No Time To Die film premiere would also not go ahead as planned.

Suffering through the cancellation of 2020 events is not how the Grimaldi Forum expected to spend its 20th anniversary year. With a strong line-up of scheduled events announced in January, Monaco’s premier conference centre was hoping to better last year’s record figure of 290,000 visitors.

The cancellations will also heavily impact Monaco’s economy. The Grimaldi Forum achieved a turnover of more than €21.5 million in 2019, with spinoffs amounting to more than €68 million for the Principality.

Monaco’s biggest upcoming events – The Rose Ball on 21st March, The Monte-Carlo Rolex Masters on 11th April and the Monaco Grand Prix on 24th May are – at this stage – still going ahead as planned. 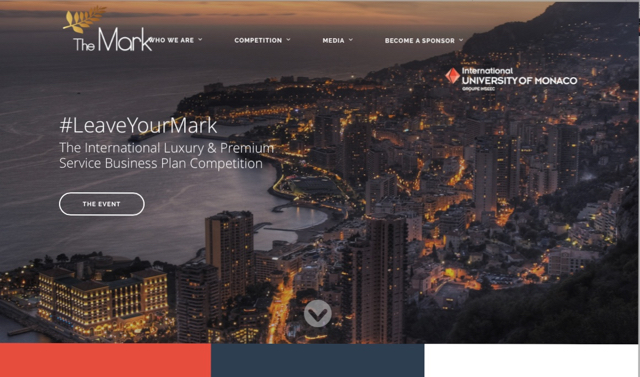 The International University of Monaco (IUM) is organising an event on April 26 this year entitled “The Mark”. According to IUM, The Mark challenge brings together six qualifying teams to present pioneering luxury or premium service ideas along with insight and inspiration from eminent speakers. Finalists will have the chance to present a 10-minute pitch of their business plan in front of the jury in hopes of winning the competition. “The Mark is a luxury business pitching competition hosted by the International University of Monaco that connects students, academic professionals, and business leaders,” the University says. “This competition allows for students with an entrepreneurial spirit to pitch a luxury or premium business idea to a professional panel of potential investors and community leaders.” Keynote speakers have not yet been announced and so far no venue has been set. IUM, which specialises in offering courses in luxury management, is also looking for sponsors for the event, which they say will be attended by eminent personalities from a variety of backgrounds, including funders, founders, industry experts, student leaders, professors, executives and other specialists.

Registration forms are available online and should be emailed to atarquini@inseec.com by Wednesday, February 15.

Business & Finance Cassandra Tanti - April 12, 2020
Following news that construction has resumed at Monaco’s Larvotto beach development, the government has written into law strict safety measures to be employed at all construction sites across the Principality.