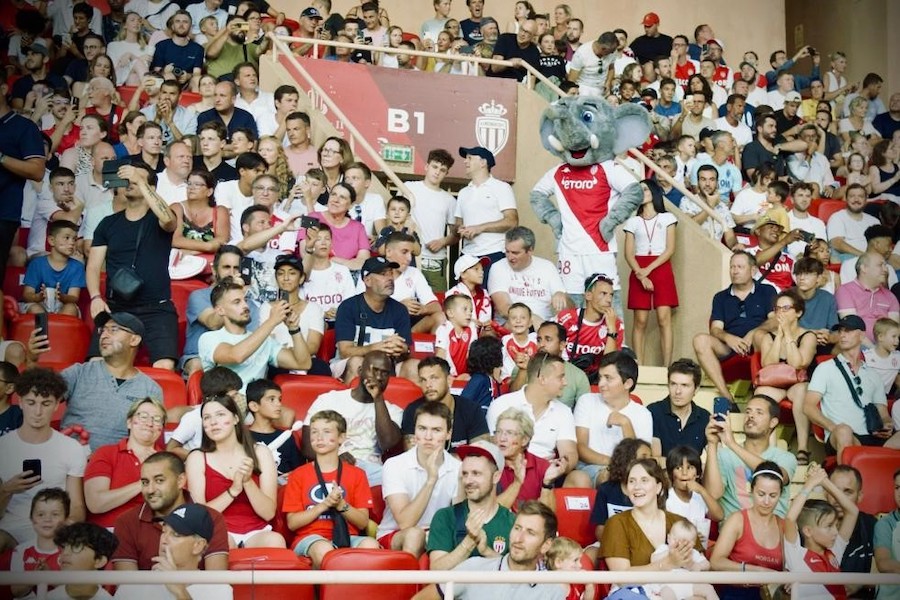 Following two years of absence, the ‘Munegu Family’ has made its long-awaited return, filling their allocation during the first two home games of the season.

First during last week’s premier leg against PSV Eindhoven, and then during last weekend’s draw against Rennes, nearly 1,000 fans packed the Seconde B to support Philippe Clement’s men.

What is the ‘Munegu Family?’

The ‘Munegu Family’ allows an adult and a child to attend all of AS Monaco’s Ligue 1 home matches for just €450.

In a specially dedicated stand, the Seconde B, fans of the Principality club are treated to a range of activities, supplementing the on-pitch excitement. From a magic show to make-up stands and the chance to meet the club mascot, Bouba, there is something for everyone.

For Monaco’s previous two encounters, the stand has been full, welcoming almost 1,000 fans and places for this Saturday’s encounter against RC Lens are still available.

The return of the ‘Munegu Family’ after two years of absence due to the Coronavirus pandemic is welcome, and is now supplemented by a range of other campaigns made to encourage matchday attendance.

As well as providing a family-friendly way in which to watch the matches, other campaigns such as the ‘MuneGo’ car-sharing app also facilitate travel to both home and away games. Combined, the campaigns allow fans to get closer to the team that they love.

For Olga Dementeva, assistant Director General, the aim of the scheme is clear. “The will of the President is to reinforce the links between the club and its local supporters, by allowing children access to the stadium. The objective of the ‘Munegu Family’ is to offer a privileged environment to families, in order to give them the desire to come as often as possible to encourage the team at the stadium.”

The success of the scheme thus far is undeniable, and the hope is that fans continue to benefit from this memorable, unique experience throughout the entire Ligue 1 season.