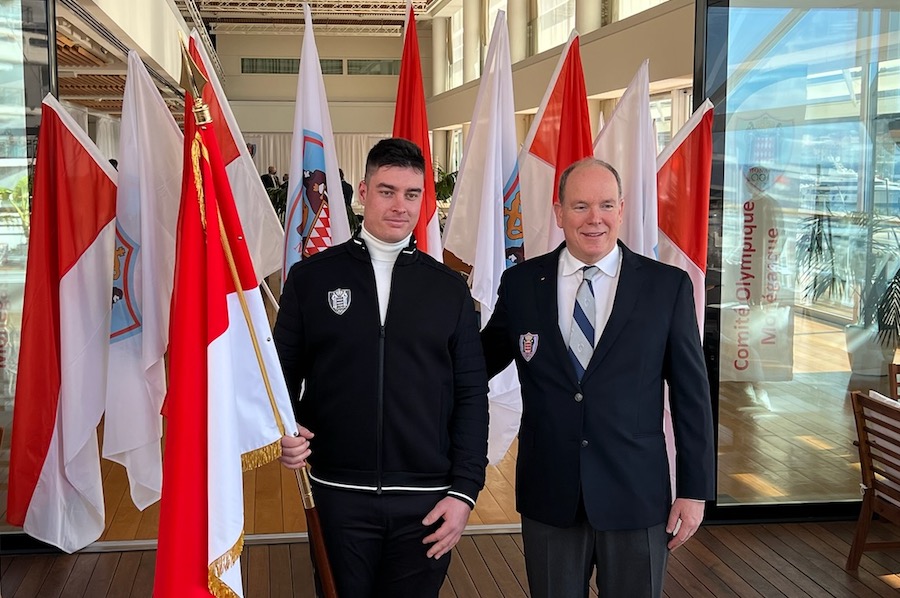 Before heading out to Beijing as the Monegasque flag-bearer at the Winter Olympics, skier Arnaud Alessandria spoke to Monaco Life about the highs and lows of his journey.

On 4th February in the Beijing National Stadium, Arnaud Alessandria will add his name to the miniscule list of athletes who have had the honour of bearing the Monaco flag in an Olympic ceremony.

The unveiling of Monaco’s latest flag-bearer in the ballroom of the Monaco Yacht Club on 18th January carried a greater symbolism than the regular pre-Olympic formality, the Monegasque flag representing a baton as it was passed from one flag-bearer to the next. Prince Albert II, who has carried the flag three times for Monaco at the Winter Olympics, now bestows the responsibility upon Alessandria, who will fulfil the role for the first time in two weeks.

As Alessandria prepares to wave the Monaco flag aloft in the National Stadium in Beijing, he doesn’t feel the burden of expectation that the role implies. “To be the flag-bearer is an honour,” he tells Monaco Life. “I think it can only be a bonus, and it will further boost me for these Olympics.”

His journey to becoming flag-bearer of his nation has been far from linear and riddled with setbacks. Only a few weeks ago, the skier was involved in a crash in Tarvisio, but his reaction to this is indicative of a determination that has brought him to this point. “I’m doing well. Just a little sprain, so I passed through the hands of the physical therapists, who have put everything back in place and today it’s all good,” he says light-heartedly.

But tantamount to his physical capacity to bounce back is this unwavering self-confidence, leaving him undeterred even in the face of this pre-competition crash. “We’re in a sport where we fall often, so that doesn’t dent my confidence. Just until the departure (to China), I need to get back on the skis to get back into the swing of things.”

Supplementing the confidence he has in his own ability is the experience of having already competed at the Sochi Winter Olympics in 2014. A 39th place finish in the Men’s Downhill and a 36th in the Men’s Super Combined Downhill on the Russian slopes provides a basis upon which to build. “I can take my experience, and arrive there knowing what to expect, and be more of a participant in the event rather than being overwhelmed by the event,” adds the 28-year-old Monegasque.

Alessandria had initially been hoping to put this experience to use in Pyeongchang in 2018. Not only would he not improve on his 2014 result, he wouldn’t even board the plane to South Korea. With only a matter of days before his expected departure, a cruel turn of events deprived Alessandria of his place in the Olympic team.

With the Monegasque Olympic quota reduced, it was Alessandria who missed out, the timing of the decision, he says, was particularly devastating: “It was a very last-minute decision, I found out about a week before the departure. It was very hard, very hard, because you prepare a lot for an event like that.”

His omission from the team was undoubtedly a sucker-punch. His reaction was, however, indicative of who he is, both as a person and as an athlete. “It has allowed me to bounce back, to work and train harder, to progress so that it doesn’t happen again.” His work since has not only allowed him to return to the fold, but he will do so in style when he leads out his compatriots in the opening ceremony on Friday 4th February.

Like many, preparation for the competition has been marked by the disruption that the global pandemic precipitated. “It has disturbed our preparation. We are used to going to Argentina or Chile in September, so that wasn’t possible, and it’s been impossible for two years now,” he reveals. “So, it’s a bit complicated. Even in Europe with the lockdowns and the restrictions, we’ve had less opportunity to train.”

As well as the epidemiological situation, the build-up to the event has been dominated by a hostile political backdrop. The noise surrounding China’s human rights abuses has only intensified as the games have drawn closer. Questions have been asked about the country’s treatment of the marginalised Uyghur community, whilst the disappearance of Chinese professional tennis player Peng Shuai in December provided an untimely reminder of China’s record, with the start of the games in sight.

Alessandria though is fully concentrated on the task in hand. “I think we’re there to provide sport, to provide a spectacle, and everything that is political isn’t really up to us to judge.” The Monegasque’s objectives are clear, telling Monaco Life, “I want to improve (on my 2014 performance). My ambition is to be in the top 30 in the downhill, so I will just give it my all.”

Alessandria’s flight out to China on 28th January has brought an end to the eight-year wait to compete in his second Winter Olympics. The disappointment of 2018 hasn’t been consigned to the history books. Instead, it is a source of inspiration for Alessandria, who will call on a wealth of experience, both positive and negative, in the search for Olympic glory on the slopes of the Chinese capital this month.