National Day in all its glory: Monaco celebrates tradition and culture

National Day in all its glory: Monaco celebrates tradition and culture 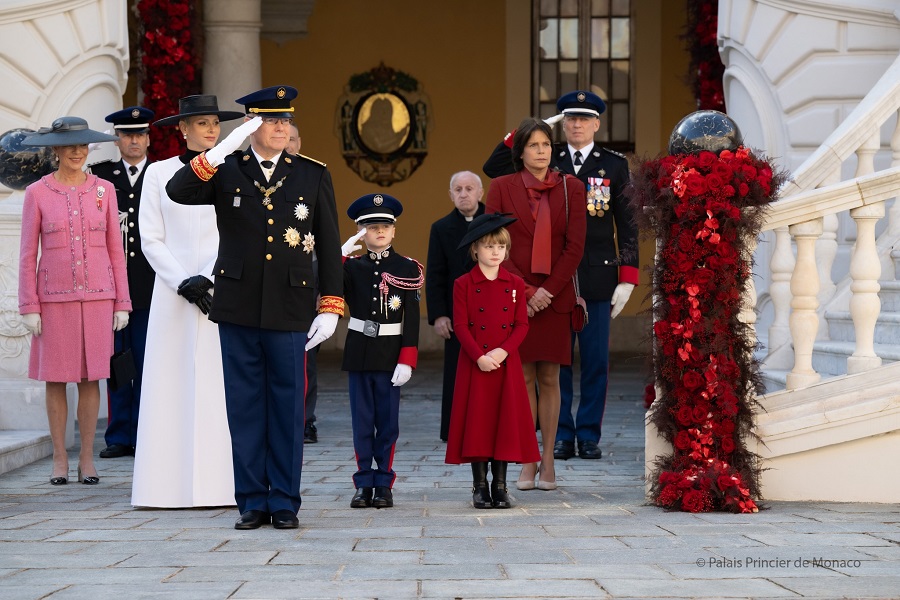 The Principality of Monaco celebrated its Fête Nationale over the weekend with plentiful glamour and fanfare, but also the important values of authenticity, tradition and family.

It was a momentous occasion. Free from the constraints of Covid regulations for the first time in three years and with Princess Charlene at the side of her husband, Prince Albert II, after a noticeable absence due to health concerns in 2021, the Princely family of Monaco was finally able to fully share its National Day celebrations with citizens and residents of the Principality on Saturday 19th November.

No one held back in their joyous tributes to the Monaco of today and years past, from the schoolchildren bedecked head-to-toe in the classic red and white of the Monegasque flag to the citizens who lined the streets, the sublimely coordinated military parade inside and outside the Palais Princier, and the iconic royal family, which was very well-represented.

Another layer of history was added to the day with 2022 marking the centenary of the death of Prince Albert I, a shining light in the story of Monaco.

Much of the day was live streamed to a global audience, giving this year’s edition a thoroughly modern and open air.

The day began with the traditional early-morning Te Deum mass at the Cathédrale de Monaco, attended by the Princely family as well as key governmental, religious and public service personnel. The procession then made its way to the palace at 11am for a medal ceremony within the confines of the Cour d’Honneur.

The Saturday medals were preceded on Friday 18th November by a ceremony led by Princess Caroline of Monaco, who handed out the prestigious Order of Cultural Merit awards at the Salon Bleu of the palace, an event held annually within the framework of the National Day celebrations. This distinguished award “rewards people who have participated, through their works or their commitment, in the development of the arts, humanities and sciences in Monaco or [those] who, even abroad, have contributed to the intellectual influence of the Principality”.

Earlier in the week, Princess Charlene herself was awarded the Vermeil medal for sport and physical education. Prince Albert presented his former Olympic swimmer wife with the medal, which acknowledges her enduring commitment to sport within the Principality.

Side-by-side on Wednesday 16th November, the Princely couple also praised the work of the Monegasque branch of the Red Cross, awarding 41 individuals with a medal to recognise their exceptional benevolent efforts in Monaco and further afield. Click on the gallery below…

An iconic moment in Monaco

Following the more private ceremony inside the palace, a military parade and a brass band circled the Place du Palais, while the Grimaldi family headed to the balcony to wave to the crowds who had congregated on the square below. The crowds were particularly delighted to see the hereditary Prince Jacques – wearing the official habit of the Carabiniers for the first time alongside the Grand-Croix de l’Ordre des Grimaldi cross – and twin sister Gabriella giggling and joking with their parents. It recreated the happy annual image of the family; an iconic moment that marks the special day. Click on the gallery below…

Full to the rafters for the Damnation of Faust

National Day came to a genteel and enlightened close with a theatrical performance at the Grimaldi Forum of the Damnation of Faust in the evening. The award-winning events space was full to the rafters with Monaco’s well-to-do and best dressed, all there by personal invitation of the Prince. The exclusive nature of the night, however, was complimented by the generous decision to live stream the performance – a revisiting of Hector Berlioz’s work by Kazuki Yamada, the Artistic and Musical Director of the Monte-Carlo Philharmonic Orchestra – that allowed the whole world to join in with Monaco on its National Day. Click on the gallery below…