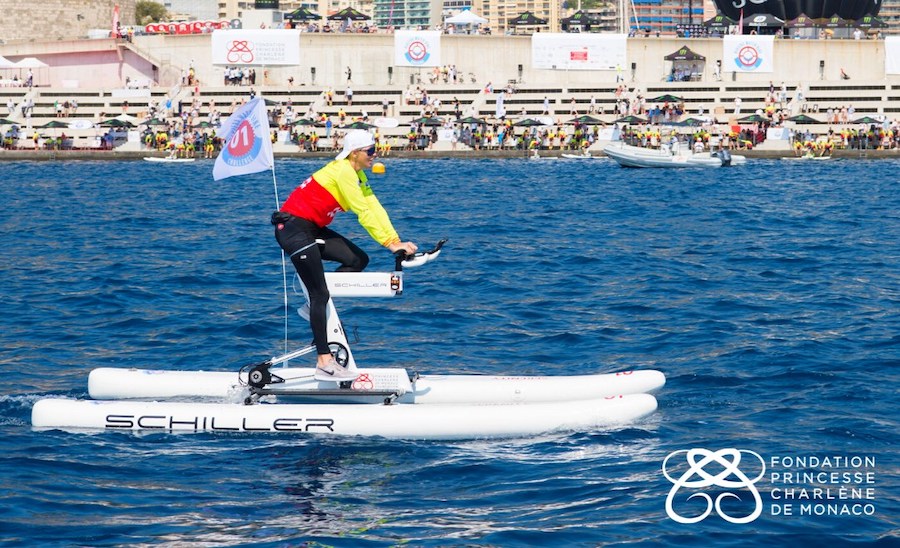 The Riviera Water Bike Challenge is back this summer, in a different format but with all the excitement of previous years, as well as a chance for the public to try out the water bikes for themselves at the Yacht Club of Monaco.

The Riviera Water Bike Challenge is an annual fundraiser for the Princess Charlene of Monaco Foundation, and this year it will support the drowning prevention programme ‘Swim for Safety’ aimed at underprivileged children in Sri Lanka.

It is set to be held on 5th June, starting and ending at the Yacht Club of Monaco (YCM).

Unlike the previous challenge in 2020 that stretched between Monaco and Calvi in Corsica, spectators will this year be able to enjoy the race first-hand on the Solarium of the Digue Rainier III, as teams of five compete in a water bike relay race on the Port of Monaco. Teams will be made up of sports celebrities and sports enthusiasts, making for an exciting race and a family-friendly day of water sports and entertainment.

In March, people who wished to sponsor a team and participate in the challenge were given the opportunity to test out the water bikes at the YCM, drawing more than 50 people.

Now, the Foundation is offering a second chance to try out the water bikes, this time on 27th April between 2pm and 6pm, when the Foundation’s team will be on hand to give supervised trials.

In case of unfavourable weather, the day will be postponed to a later date.

So far, there has been no mention of whether Princess Charlene herself will be participating this year, but her brother and Secretary General of the Princess Charlene Foundation Gareth Wittstock has been training at the YCM and will almost assuredly be part of one of the competing teams.