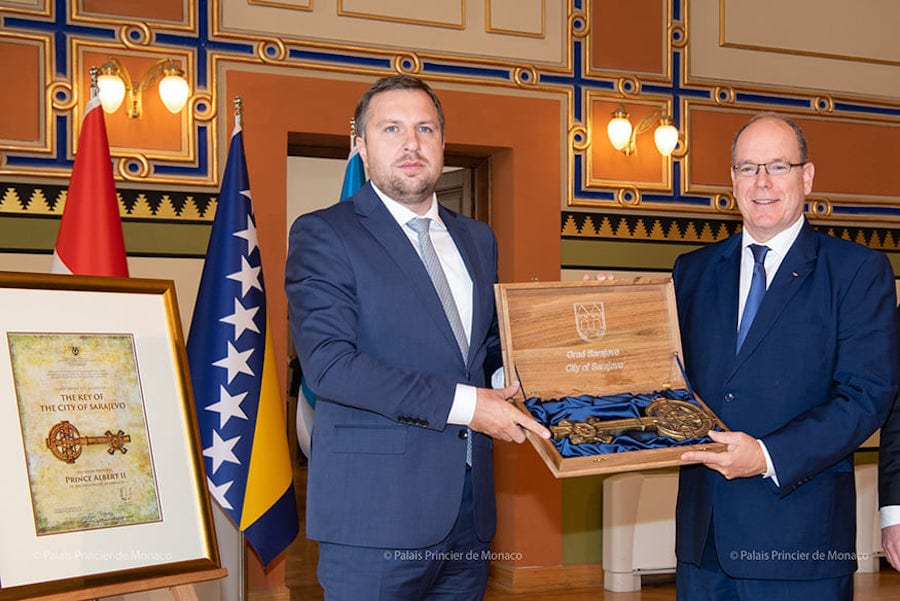 As part of a wider tour of Eastern Europe this month, Prince Albert has visited Sarajevo, where he was presented the Keys to the City and was made an honorary citizen.
The Prince was invited to the region on 8th and 9th October by Mayor of Sarajevo Abdulah Skaka and paid a courtesy visit under the theme of sport, attending the inauguration of the renovated Olympic Museum in Sarajevo and representing the President of the International Olympic Committee Thomas Bach.
Officially opened on 8th February 1984 for the start of the XIV Olympic Winter Games in Sarajevo, the museum today presents itself as a fusion of sport and art. Its basic concept is the enhancement of the spirit of Olympism, Olympic values, creativity and youth.
Prince Albert was also welcomed at the Town Hall by Mayor Skaka for a ceremony during which he received the Keys to the City of Sarajevo, granting him Honorary Citizenship.
The Prince and his delegation went on to visit the Old City of Sarajevo, including the typical Ottoman quarter of Baščaršija where the Kazandžiluk bazaar is located, the craftsmen’s street of Sarači, and the Gazi Husrev-bey Mosque built in 1531. He also toured the former Sephardic synagogue, now the Jewish Museum of Bosnia and Herzegovina dating back to 1591, and the Orthodox Church of St. Michael and St. Gabriel in Sarajevo – all of which are included in the List of National Monuments of Bosnia and Herzegovina.
Photo © Gaetan Luci / Palais princier