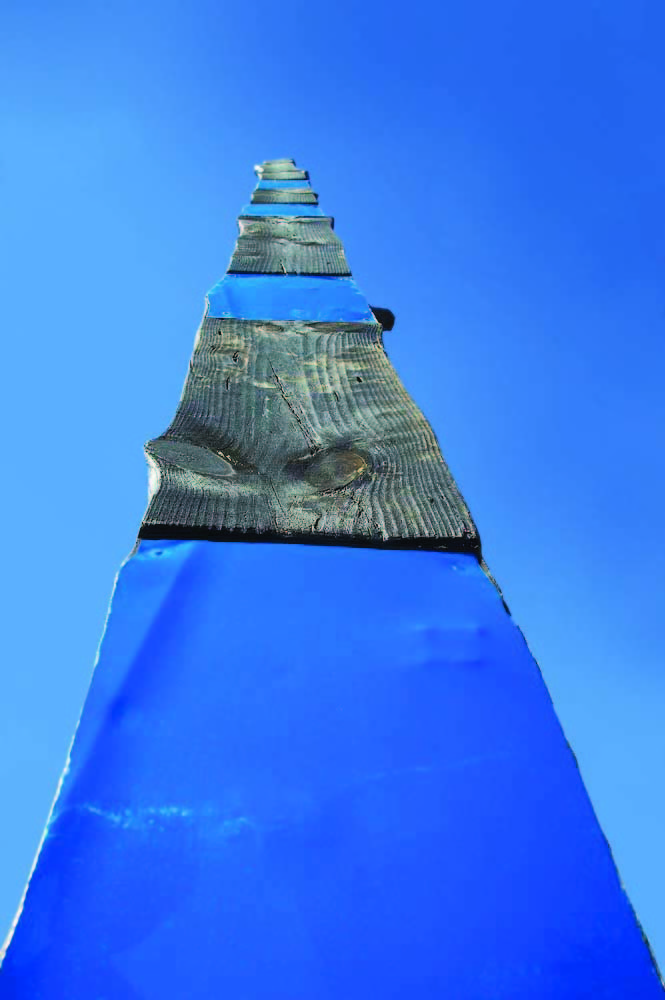 The City of Nice is set to host a monumental installation of 15 ‘Burnt Trees’ sculptures by Philippe Pastor in the heart of the Sacha Sosno Garden.

In an effort to beautify its urban environment, the City of Nice has commissioned the works of two artists to be installed in public areas. One of those are the ‘Burnt Trees’ of Philippe Pastor, which will be unveiled in late September and will be on loan to the city for a period of one year.

Upset by the fires in the Massif des Maures, Philippe Pastor created the series of sculptures in 2003 using charred tree trunks from the region. They have since become a symbol of the fight against deforestation and are exhibited all over the world.

The artist is passionate about working closely with nature and keeps the temporality of the living at the heart of his work, the action of natural elements being an intrinsic part of his work process.

This sculpture consists of 15 charred tree trunks adorned with enamelled plates. Each trunk has a diameter of 30cm, a height of 7 to 8m (including 1m buried) and a weight of about 150kg per piece.

Philippe Pastor’s message resonates even more so today with the tragedy of the fires raging in the Amazon.

A new exhibition dedicated to Burnt Trees will also be presented in October at the Monaco Modern’Art Gallery and will include an immersive interior installation of sculptures, in dialogue with his latest paintings.

Nice will also unveil Claude Gilli’s ‘Tree Forest’ in the forecourt of the Pasteur Hospital.

Culture Louise Simpson - January 4, 2018
“Hermès crocodile handbags need their own passports to travel,” says Gréther. As I pincer salmon sushi into my mouth at Capocaccia, at Impasse de la Fontaine, Gréther recounts a recent Artcurial Monaco auction sale. I cannot decide whether to be more shocked that a handbag required its own passport (as crocodiles are an endangered species) or that this particular fulgent-pink crocodile Hermès handbag encrusted with pink diamonds sold for over 100,000 euros. With her statuesque figure and blonde hair neatly coiled into a chignon, Gréther fits seamlessly into the world of priceless artefacts. There’s a hint of James Bond girl about this convent-school girl who spent seven years as a director in the world of business intelligence and ended up marrying into one of Monaco’s most established dynasties. The mysterious Gréther is a formidable networker – indeed I met her through a mutual friend in one of Monaco’s hallowed circles. “Artcurial is a lean and mean organisation,” says Gréther. Artcurial has risen from new-kid-on-the-auctioneering-block to a 150-strong team in less than a decade... [ihc-hide-content ihc_mb_type="block" ihc_mb_who="reg" ihc_mb_template="" ] SIGN IN TO YOUR PREMIUM ACCOUNT TO READ MORE (click Sign In at the top of the page) [/ihc-hide-content] [ihc-hide-content ihc_mb_type="show" ihc_mb_who="reg" ihc_mb_template="" ] Set up in a hôtel particulier (townhouse) by Nicolas Orlowski in Paris, Artcurial has defied expectations. Headquartered in the City of Light, this general auction house has expanded worldwide to Brussels, Milan, Munich, Tel Aviv and now Monaco. A subsidiary of the Dassault Group, Monegasque billionaire Michel Pastor was a shareholder until his death in 2014. Since then, his daughter Delphine (who is president of the John Taylor real estate group) has remained an investor. Gréther was recruited to oversee the 2015 opening of Artcurial Monaco. The branch runs summer and winter auctions of luxurious collectibles such as jewellery, fine wines, watches and vintage Hermès handbags. There are also specialty auctions: in the past, these have included Philippe Hiqily sculptures and vintage limousines from the private collections of Prince Rainier III or Maria Callas. Gréther runs evaluation days for jewellery and Hermès at Monte Carlo’s Hôtel Hermitage and oversees confidential valuations of private house collections in other areas from contemporary to ancient art and furniture. “I’ve always had a fascination with crime,” she says. Her first job out of Edinburgh University was for BBC’s Crimewatch series working on film reconstructions and speaking to the police and to victims. The role was so poorly paid that she spent her evenings supplementing her income by pulling pints in a local pub. After the high-profile murder of Crimewatch presenter Jill Dando, she decided it was time to move on. “I started looking behind my back as I walked home from work,” she recalls. She moved into International Relations with a post-graduate course at the well-regarded Johns Hopkins University in Washington and Bologna. During this time, she worked for the Organisation for Economic Co-operation and Development (OECD) monitoring elections as a short- and long-term observer. Observers are posted to evaluate corruption levels and then report back to the European Union in Brussels. Gréther was posted to crime-ridden political regimes around the globe from Bosnia to Nigeria. In Pakistan, she hid her face in a Burka. In Siberia, she visited hospitals and prisons where locals endured filthy conditions and minus 30-degree temperatures. In Burkina Faso, she ended up staying with a local family to get away from staying in one “disgusting” hotel. “It was a test of endurance,” she says. “There were many moments when I was scared for my life.” Her mission partners provided both support and, at times, frustration. In Madagascar, her mission partner was an immaculately dressed Venetian Italian. He commenced the mission inauspiciously by falling into a sewer with his designer suitcase and extensive medical supplies tumbling into the excrement after him. In Armenia, her mission partner shouted permanently. She recalls that he got himself into such a state of fury that he drove into a wooden pole. He then pulled himself off the mission by claiming that the accident had been caused by his having a heart attack. Her favourite posting was to Nigeria. Despite widespread political corruption, she spent a happy six weeks in Lagos where she had two fun-loving bodyguards called Friday and Sunday. “I loved the energy and spirit of Africa. I was touched by the incredible kindness of strangers,” she says. During her time at John Hopkins, Gréther met her Monegasque pilot husband Fabrice. They lived in London where she spent seven years working as a director in business intelligence and investigations at an international level for one of the leaders in risk consultancy before being headhunted to work at Artcurial. Since arriving in Monaco, Gréther has made the most of everything that the principality has to offer from the Philharmonic orchestra to the endless sunshine. In her rare spare time, mother-of-three Gréther helps to organise events with her friend, Saman Ahsani, for the Iran Heritage Foundation. Four intimate dinners are held per year at places such as The Courtauld, Tate Modern and The British Museum. “For our charity events, we seek somewhere,” she pauses as she chooses the right words: “Extraordinary with an art focus.” I wonder whether this last phrase would be an apt description for Gréther herself. Summer on the Riviera Artcurial’s summer auction starts this afternoon at Monte Carlo’s Hôtel Hermitage. The four-day auction will include fine jewellery and watches, Hermès Summer Collection and Franck Sorbier couture. There will also be a sales of Hermès vintage and rare wines in aid of Benefit Mission Enfance on July 21 at 6pm. See www.artcurial.com for an up-to-date auction schedule. Article first published July 18, 2017. [/ihc-hide-content] 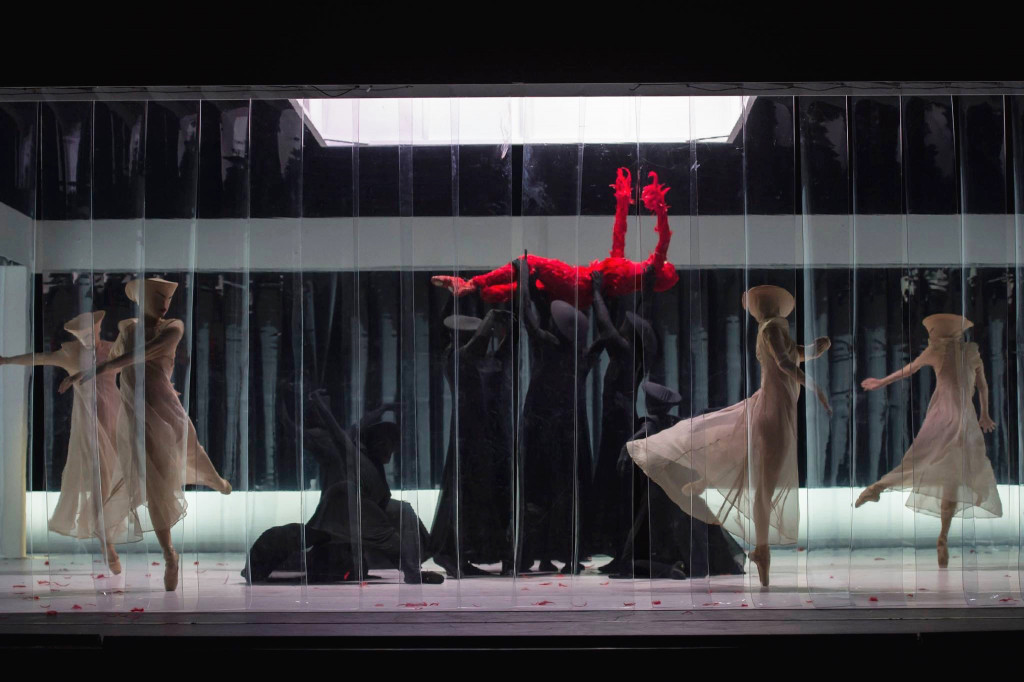 The Ballets of Monte Carlo have been heartily congratulated for their masterful interpretations of the creations of Jeroen Verbruggen and Sidi Larbi Cherkaoui, performed from July 19 to July 22 at Salle Garnier at the Monte-Carlo Opera.

Jean-Christophe Maillot, the company’s director-choreographer, has enriched the already acclaimed repertoire of Les Ballets by using the contributions of these young contemporary choreographers, both of whom have long-standing connections with the company.

Jeroen Verbruggen danced for ten years with Les Ballets before embarking on his own career as a choreographer whose first works were performed in Monaco (Kill Bambi in 2012).

Sidi Larbi Cherkaoui created In Memoriam in 2004, then Mea Culpa in 2006, before completing his trilogy this year with Memento Mori. The exceptional dancers of the Monte Carlo Ballets knew so well how to make the magic of others’ imagination come to life on the stage, further enhancing the stellar worldwide reputation of the Ballets of Monte Carlo.