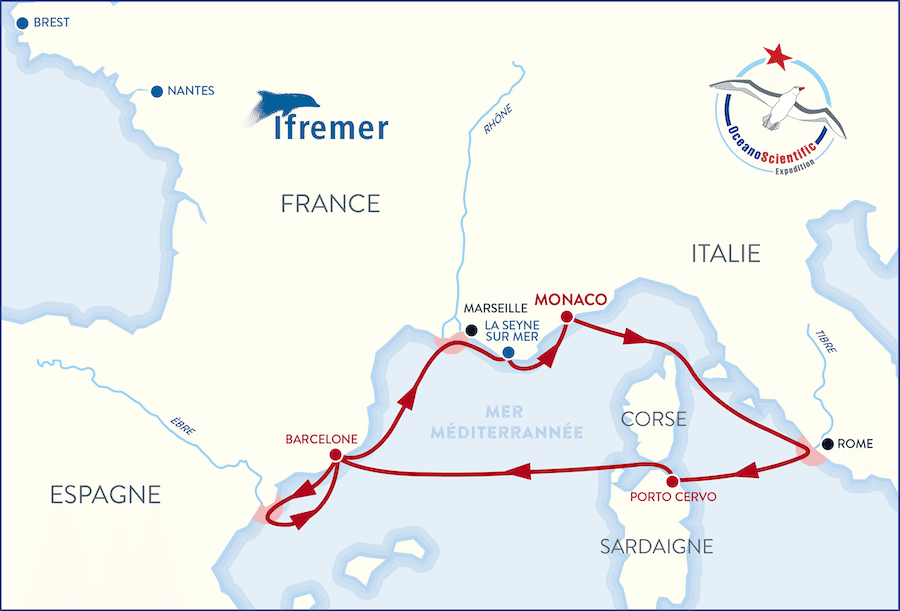 Local navigator Yvan Griboval is set to take off on another oceanographic campaign, this time to study contaminants in the Mediterranean ahead of a larger expedition in the Spring.
During a press conference on Tuesday, Yvan Griboval, navigator of Club des Explorateurs from the Yacht Club of Monaco, announced that he will set off on another oceanographic campaign on Thursday, 15th October at 3.00pm from the YCM’s main pontoon. He will be at the controls of the Amaala Explorer maxi-catamaran, which had its heyday as Club Med 20-years ago, flying the flag of the Yacht Club of Monaco and winning The Race 2000, the first non-stop round-the-world race in a crewed multihull.
The campaign will consist of collecting samples of chemical contaminants – metallic and organic – according to the recommendations of the Institut Français de Recherche pour l’Exploitation de la Mer (Ifremer), which is supervising the scientific aspects of this OceanoScientific Contaminants Mediterranean Expedition 2020. The 2,800km course will run from Monaco to Porto Cervo, Barcelona, La Seyne-sur-Mer and Monaco. The expedition will end on Thursday, 29th October at 11.00am in Monaco.
On recommendation from Ifremer, two distinct scientific methods will be applied.
The Amaala Explorer maxi-catamaran will allow the crew, including the young Swedish marine biologist Linn Sekund, to study the mouths of the three main rivers of the western Mediterranean: the Tiber, not far from Rome, the Ebro between Barcelona and Valencia, and the Rhone, west of Marseille. There, Yvan Griboval and Linn Sekund will collect samples and also install two sets of passive sensors approximately 1.50 metres below the surface of the sea on beacon buoys.
The sampling will concentrate on the trace metals of cadmium (Cd), lead (Pb), nickel (Ni) and mercury (Hg). Although naturally present in the environment, it is their exceptionally high concentration which poses a risk for marine fauna and flora, starting with plankton, the first organisms to be poisoned at the outset of the food chain.
During the expedition, nine locations will be used to collect samples, which will then be stored in the onboard freezer and handed over to researchers at Ifremer Toulon on Wednesday 28th October during a port call in La Seyne-sur-Mer. The scientists will quantify and analyze the concentration of polychlorinated biphenyls (PCBs), polycyclic aromatic hydrocarbons (PAHs) and tributyltins (TBT), all of which are organic compounds. They too poison the food chain until it ends up in our plates.
The Amaala Explorer is named after the main sponsor of the expedition, a luxury tourism project on Saudi Arabia’s northwestern coast that is inspired by the Red Sea. The site has been tasked by the Saudi Kingdom to preserve its environment and, in particular, the magnificent coral reefs in the Red Sea, and to balance its carbon footprint.
“In fact, this short two-week expedition will allow us to see if the yacht is genuinely suitable for our forthcoming OceanoScientific Expeditions,” explained Yvan. “We know that the maxi-catamaran is capable of sailing in the difficult conditions of the Far South, but we want to check that it is also suitable for our work on contaminants and, potentially from next spring onwards, to carry out a series of unprecedented assignments to discover, study and save coral.”

Sailor’s historic expeditions to help save the ocean