Other operators still lag behind Monaco Telecom and Orange

A study of mobile telephony coverage in the Principality has found that while improvements in quality of service have been made across the board, Monaco Telecom and Orange continue to provide the best quality of service.

The study was conducted in the first half of 2017 by the Electronic Communications Department. A total of 120 measurement points, exterior and interior, were used to test mobile phones using the IOS and Android operating system at different times, including during off-peak hours.

The study found that Monaco Telecom and Orange, whose network is actually provided by Monaco Telecom, provide excellent coverage and a high quality of service, while the performances of the other three operators Bouygues Telecom, Free and SFR – while inferior, have improved since 2016, following a request from the Minister of State. For telephone calls, made or received, the coverage rate of these operators is today greater than 98 percent when made outside buildings.

However, the quality of internet connections and the throughput offered by these three operators remains much lower than those of Monaco Telecom and Orange.

It also appears from these measurements that the experience of customers often depends on their smartphone. Notable differences are seen between different models which do not have the same sensitivity and the same performances on the same network.

Based on the audit conducted by an independent provider, the study demonstrates the high quality of the mobile services provided by the national operator. 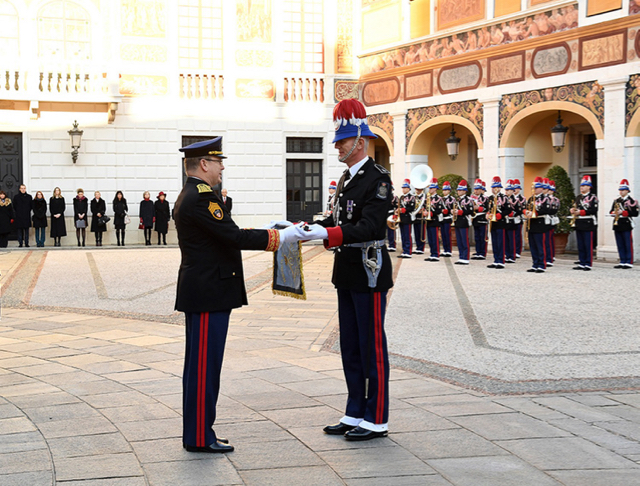 Photo: ©Manuel Vitali/Direction de la Communication[/caption] Ceremonies commemorating San Sebastian, the patron saint of the Prince’s Carabinieri, took place on Friday morning, in the presence of Prince Albert. This was the first event in a calendar covering the year 2017, which will celebrate the bicentenary of the creation of the Compagnie des Carabiniers du Prince in 1817 by the future Prince Honore V. For this occasion, the Sovereign Prince, Colonel Luc Fringant, the officers and the guard with the standard of the company carried the Medal of the Bicentenary. During the Taking of Arms in the main courtyard, the new Chief of Corps, Commander Gilles Convertini, was awarded the Command of the Compagnie des Carabiniers du Prince. At the end of the ceremony, the company went out by the Porte d'Honneur of the Prince's Palace marching to the sound of the Carabinieri Band and continued to the Cathedral to celebrate the Mass of its Saint, Saint Sebastian. READ ALSO: Rowing for the Rocher READ MORE: NFL organisers over the moon

Local News Cassandra Tanti - March 8, 2020
Italy has ordered the lockdown of the entire Lombardy region and some other provinces, isolating around 16 million people. Meanwhile, Monaco has still registered only one positive case of coronavirus to date.