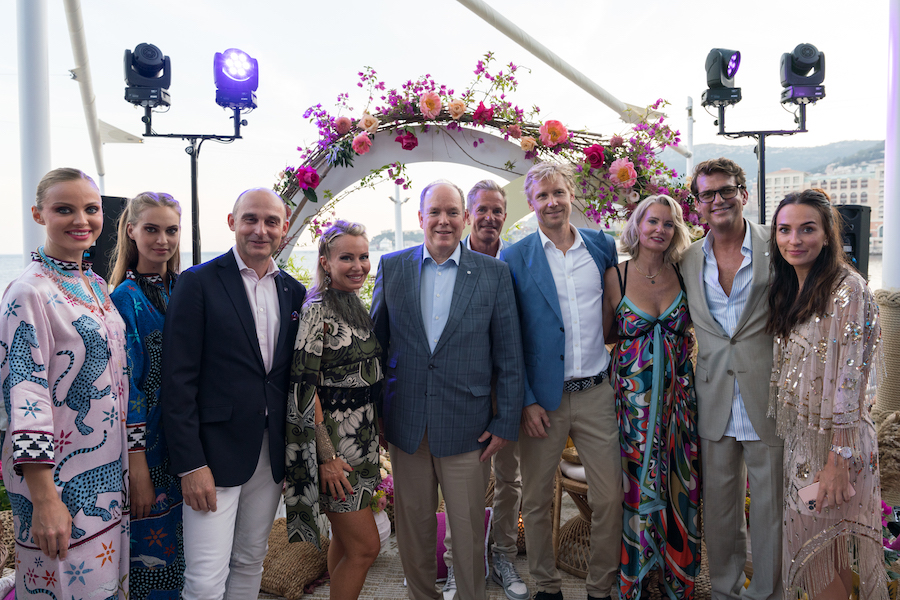 Prince Albert joined Monaco Ambassadors Club members for a summer party with Bohemian vibes at La Vigie Lounge and Restaurant on Wednesday, reaffirming the event as a highlight on the club’s busy social calendar.

As the fresh sea breezes drifted in from the Mediterranean, members and guests of the Monaco Ambassadors Club (MAC) gathered on Wednesday 6th July at the farthest end of the Principality for one of the biggest parties of the year. The event was organised by the staff of the Monaco Ambassadors Club including General Secretary Alessandra Sparaco, Club Manager Catherine Bernaz, and Event Manager Manon Delpont.

Rattan rugs, wicker chairs, and a sea of pink flowers set the boho scene for guests, who also dressed in theme for the joyful occasion.

It was a packed house as guests mingled and networked over cocktails before heading to their tables to enjoy a sprawling buffet dinner prepared by the chefs at La Vigie Restaurant.

Prince Albert was presented with a box of Ortigia products by Ben Ashworth, Brand Director at Ortigia, and Benedetta Bizzini from Ortigia retailer Eleven Monte-Carlo. The luxurious Italian soap and fragrance company also gifted guests with their own Ortigia goodie bags. The company’s stunning silk kaftans were worn by the night’s models and hostesses.

Figuière was also a sponsor of the summer party, allowing guests to enjoy their trio of Cuvée Premiere wines for the evening. Figuière is a family-owned Domaine located in the French Riviera and has been producing organic wine for almost 40 years. Château owner Magali Combard joined in the festivities of the night.

A DJ set the party ambiance as guests danced late into the night.

The Monaco Ambassadors Club was created in 1973 under the direction of Princess Grace, and Prince Albert II of Monaco is now its Honorary President. The club has enjoyed a renewal in recent years, organizing a series of events and galas throughout the year.

The club has a network of exclusive members who share a common belief in l’art de vivre (the art of living), and new members are always encouraged to join and be a part of this exciting and dynamic community.

The next event on the calendar is an Evening Cocktail at the Wine Palace in October, combing business and art, followed by Thanksgiving dinner in November.

See more images from the MAC Summer Party below…

Top photo: Prince Albert surrounded by the MAC Board of Directors and executive MAC team, by YG courtesy MAC