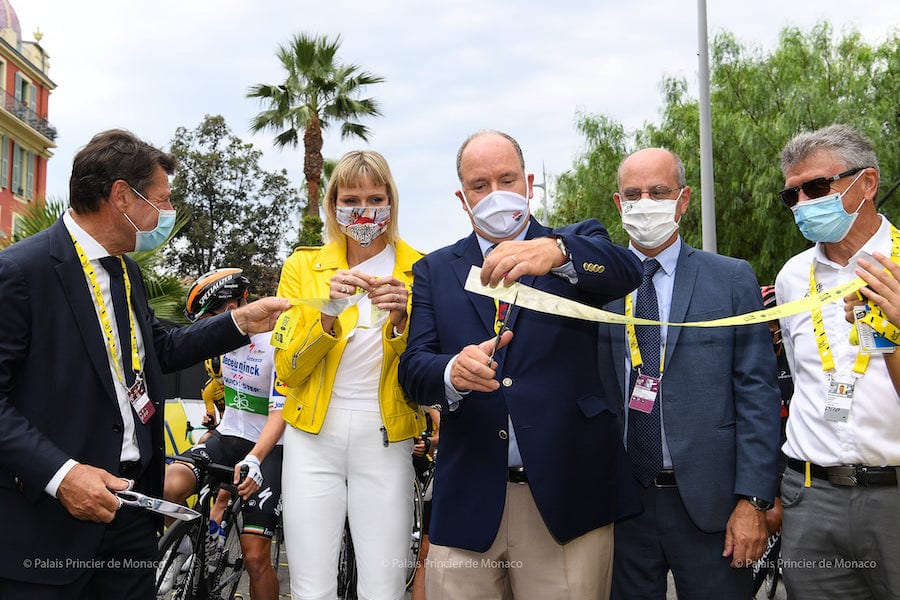 Prince Albert and Princess Charlene made a surprise appearance in Nice for the start of the Tour de France on Saturday, mingling with racing fans and cheering on competitors at the most watched sporting event in the world.
Monaco’s Princely couple casually walked hand in hand amongst the crowd on the opening day of the 107th Tour de France in Nice on 29th August, with Princess Charlene in a stylish cropped yellow biker jacket in honour of the race’s signature colour and a mask that read “Why so serious?”.
Prince Albert and Princess Charlene stood alongside Nice Mayor Christian Estrosi and his wife Laura Tenoudji for the symbolic cutting of the ribbon marking the faux start of the race, before heading up to the VIP stand to enthusiastically cheer on the cyclists.


Princess Charlene’s interest in the Tour de France is all the greater as she is actively preparing for her Calvi to Monaco Water Bike Challenge, which will be held in just under two weeks’ time.
By the Princely couple’s side were Irish fighter Conor McGregor and his fiancée Dee Devlin. The MMA champion has been training with the Princess for the 180km water bike relay across the Med despite being on opposing teams.
The couples have been spotted together regularly throughout summer and appear to have formed a close friendship.
The Prince and Princess stayed for the arrival of the women’s race, La Course by le Tour, where they attended the award ceremony. Lizzie Deignan was the victor, followed by Dutch riders Marianne Vos and Demi Vollering.
The chaotic first stage of the Tour was won in a sprint by Norwegian cyclist Alexander Kristoff, and Sunday’s second stage was claimed by Frenchman Julian Alaphilippe who won in a dramatic finish, taking the yellow jersey by a nose.
It is the second time in the history of the race that Nice has hosted the Grand Depart of the Tour de France, although it has been a stage city 37 times.
Related stories:

Click on the pictures below to see the full gallery…