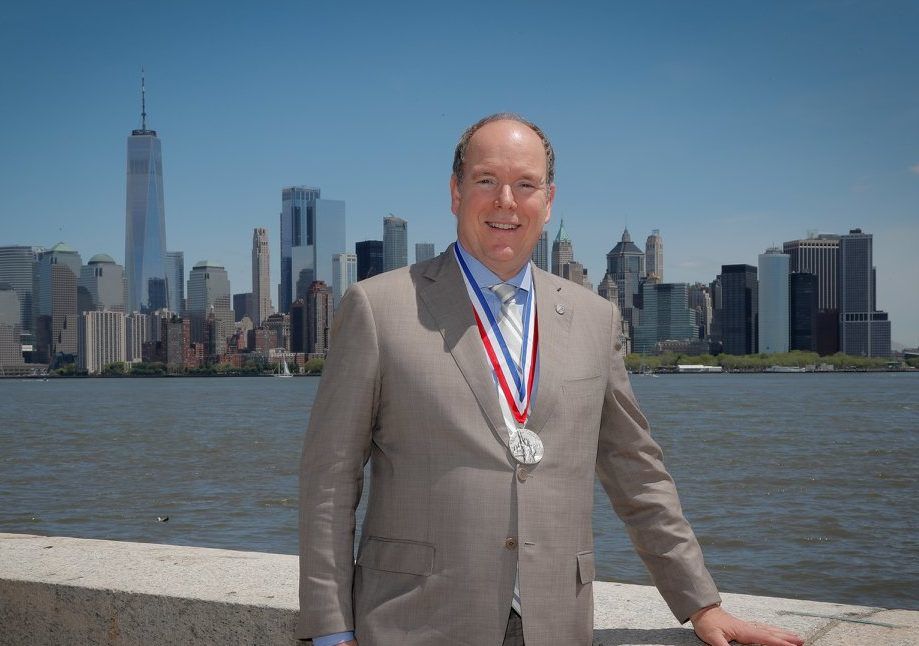 Prince Albert was awarded the Medal of Honour of the Ellis Island Honour Society by Nasser Kazeminy, the society’s President, on Friday, May 11, in New York.

The medal rewards those who embody the “Spirit of America” in its values of tolerance, fraternity, diversity and patriotism. Officially recognised by the US Senate and Congress, this is one of the most prestigious honours in the country.

Ellis Island covers about ten acres south of Manhattan and at the end of the 19th century and until the mid-20th century, the island was the main entry point for immigrants to North America.

Several members of Prince Albert’s maternal family immigrated to the US from Ireland via Ellis Island.

The island welcomed nearly 12 million immigrants from Europe and the Middle East, between 1892 and 1954, the year of its closure.

After long years of neglect, Ellis Island was transformed in the early Nineties into a museum and now only welcomes tourists. Four million of them flock there each year, alternately visiting the Statue of Liberty on “Liberty Island” and then Ellis Island.

In the afternoon, Prince Albert headed to Philadelphia to inaugurate the “Kelly House”, the family home of his mother, Princess Grace, and her three siblings Peggy, Kell and Lizanne.

“She seemed to have a very happy childhood, and it was a lot of games, a lot of fun things that were happening there,” Prince Albert told PEOPLE Magazine, “and it felt like a real family home. It was a real place of gathering and rejoicing.”

Albert also said that visiting Philadelphia and the Jersey Shore with his mother and two sisters, Princess Caroline and Princess Stéphanie “was always a great experience”.

“It was a sense of freedom that probably wouldn’t have had in other places. In those days it was not even talk of any security, so we would run off with our cousins on the beach or on the boardwalk. And when we needed to be picked up we called home and someone would come and pick us up.”