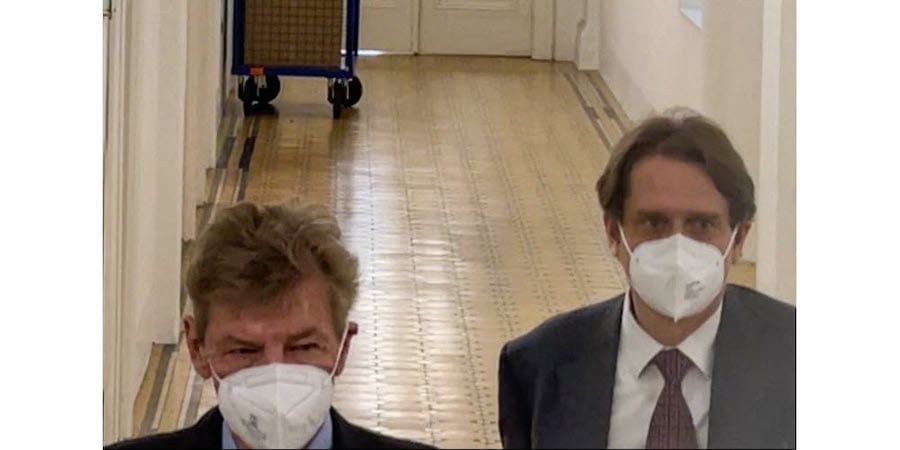 Princess Caroline’s estranged husband, Prince Ernst August of Hanover, has received a 10-month suspended prison sentence and an order to undergo psychotherapy following violent outbursts against police and employees last summer in Austria.
Prince Ernst August of Hanover, whom Caroline separated from in 2009, was handed the sentence on Tuesday by an Austrian court for crimes including resisting state authority and grievous bodily harm. The 67-year-old was looking at up to three years in jail, but a judge leniently gave him a lesser sentence along with an order to undergo psychiatric treatment.
The head of one of Europe’s oldest families was convicted of injuring a police officer during an intervention in July 2020 at his hunting lodge in Grünau Austria whilst under the influence of medication and alcohol.
Less than a week later, he was charged with attempted assault on another police officer when he threatened to hit him with a baseball bat. In September, he was again arrested for threatening employees.
The Austrian court also banned Prince Ernst August from consuming alcohol and he will not be allowed to stay in his lodge whilst undergoing treatment.
The Prince apologised at the start of the hearing, however he decided to plead not guilty.
According to the Austrian Press Agency, Prince Ernst said to the court: “I would like to apologise for everything to those involved, I regret what happened and I am ready for the damage to come up. From my point of view, that says it all.”
His lawyers stated that the prince has undergone treatment since the incidents and cited isolation and betrayal by his son as the reasons for his behaviour.
His ongoing battle with his son, Ernst August, Jr, over property and possessions has made headlines in the past and the prince has repeatedly taken his son to court. Most recently, Ernst August filed a court petition over Marienburg Castle, which he had previously gifted to his son.
Meanwhile, it was recently announced that Ernst August Jr and his wife Ekaterina Malysheva are expecting their third child. A spot of happy news amidst the madness.