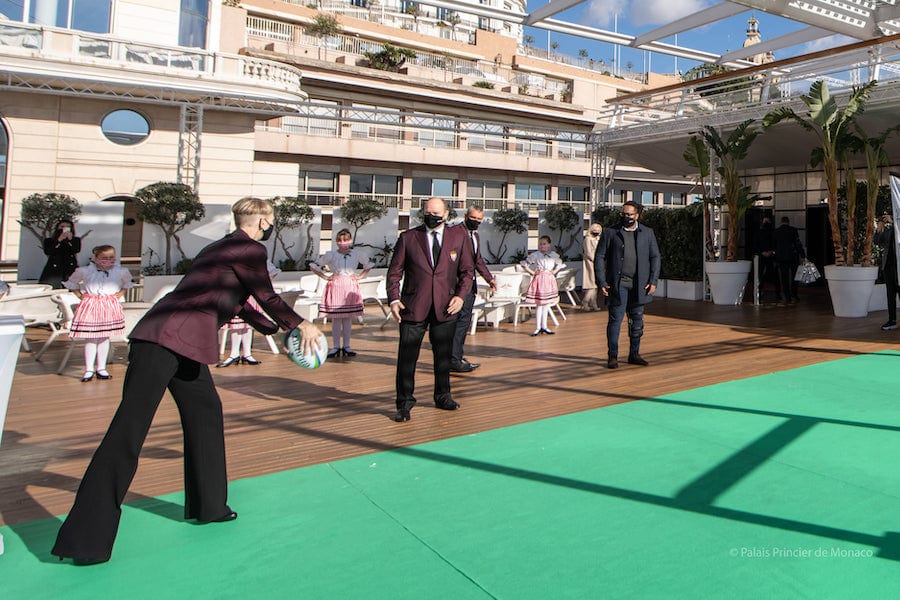 A handball between Prince Albert, Princess Charlene and French rugby player Mathieu Bastareaud has marked the official presentation of the Monaco Rugby Sevens Qualifier Tournament for the Tokyo Olympic Games.
The virtual kick-off took place at the Yacht Club of Monaco with the Princess’s brother Gareth Wittstock, who is general secretary of her Foundation, and Minister of State Pierre Dartout also in attendance.
The men and women’s Olympic Rugby Sevens Qualifying Tournament for the Tokyo Olympic Games will see 24 teams compete on 19th and 20th June 2021 at the Stade Louis II in the Principality of Monaco.


The event is organised with the support of the Monegasque Rugby Federation, the Prince’s Government and institutional partners.
The top two women’s teams and the top men’s team to come out of Monaco will go on to compete in this year’s summer Olympic Games in Japan.
Rugby Sevens is expected to be one of the most highly anticipated events of the Tokyo Games, following the success of 2019 Rugby World Cup in Japan.
At the same time, on 19th June, the Sainte-Dévote children’s rugby tournament will be held, organised by the Monegasque Rugby Federation with the support of the Princess Charlene of Monaco Foundation. It will see  16 teams from around the world competing in an under-12 mini Sevens World Cup format run alongside the senior event.
The Monaco Sevens 2021 draw will take place in the Principality at the end of April.