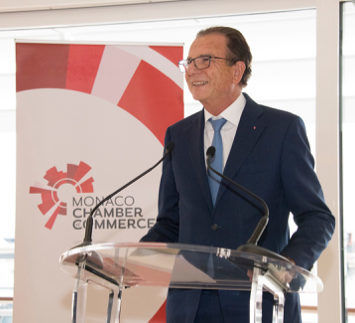 Nearly 350 economic players from the Principality were gathered for the 30th Monaco Economic Board’s Members Rendez-Vous on Monday, September 18, to enjoy an event optimised for business meetings.

Originally planned on the terraces of the Observatory Deck of the flagship of the Yacht Club of Monaco, it took place on the no less elegant Ballroom due to unstable weather conditions. For this new edition, the Monaco Economic Board has brought innovation to the forefront.

Companies took part in BtoB meetings on the sidelines of the cocktail networking, a novelty unanimously welcomed by members. A total of 70 meetings were held, connecting 90 entrepreneurs for 57 companies.

The first selected start-ups from the MonacoTech Incubator Accelerator program, created by the Monegasque state in partnership with Monaco Telecom and Xavier Niel, were invited also, in the presence of Jean Castellini, Minister of Finance and Economy.

Fabrice Marquet, Managing Director of MonacoTech, testified to the virtuous dynamics surrounding this project, whereas the second session of selection of start-ups by the Jury, which once again praised the quality of the candidates, took place on the same day.

In his speech, Michel Dotta then discussed the current situation of the MEB.

The programme includes a follow-up economic mission to Moscow (October 4-6) within the framework of the Monaco Days organised by the Ambassador of Monaco in Russia HE Mireille Pettiti, in partnership with the DTC, the Monte Carlo Ballets and the Monte-Carlo Princess Grace Check-Up Unit; the hosting of a Swedish economic delegation (October 12), as part of Prince Carl Philip’s visit to the Principality; the conference of Ludovic Subran, Chief Economist of Euler Hermes and Allianz, in partnership with JCEM, on the theme “The United States at the Foot of the Wall” (October 17); and the Eco Club of Monaco Awards in partnership with the Nice-Matin Group (November 28).

In the presence of Prince Albert, signature with IO-UPMC's Jean Chambaz and Philippe Taquet. Photo: M. Dagnino[/caption] As part of the inauguration of the Biodiversarium at the Oceanological Observatory of Banyuls-sur-Mer, a partnership agreement between Monaco’s Oceanographic Institute and the University Pierre and Marie Curie was signed on Wednesday, November 29, in the presence of HSH Prince Albert and many personalities. Both institutions are committed to collaborating on marine science, long-term ocean observation and the impact of global warming. Through their partnership, they intend to strengthen their capacities to popularise, promote and disseminate scientific knowledge and the understanding of the marine environment to as wide a public as possible. This is a logical consequence of the long-standing relations maintained by the two institutions, as evidenced by numerous documents in the archives of the Oceanographic Institute, including loans of exhibits such as reversing thermometers for a scientific campaign aboard the Orvet, animal consignments (Pennatules, Bonellies, Cerianthes, Morayes ...) and exchange of publications. The libraries of both institutions have been in constant contact since the early days and several directors of the Oceanological Observatory of Banyuls-sur-Mer served as members of the improvement committee of the Oceanographic Institute. Building on a shared past and in close collaboration, the two bodies have now officially joined forces in the service of ocean protection, in response to the growing need to inform, teach and decrypt the issues related to the marine world. Specifically, assistance will be provided to the scientific missions conducted by Monaco Explorations. Monaco’s Oceanographic Institute –founded in 1906 by the Prince Albert I Foundation –and the Oceanological Observatory of Banyuls want to engage as much as possible to better understand the impact of human activities on the oceans, and to encourage their conservation.

Local News Staff Writer - March 22, 2019
Novak Djokovic, Rafael Nadal, Alexander Zverez and Stefanos Tsitsipas will all be fighting it out at the next Rolex Monte-Carlo Masters.