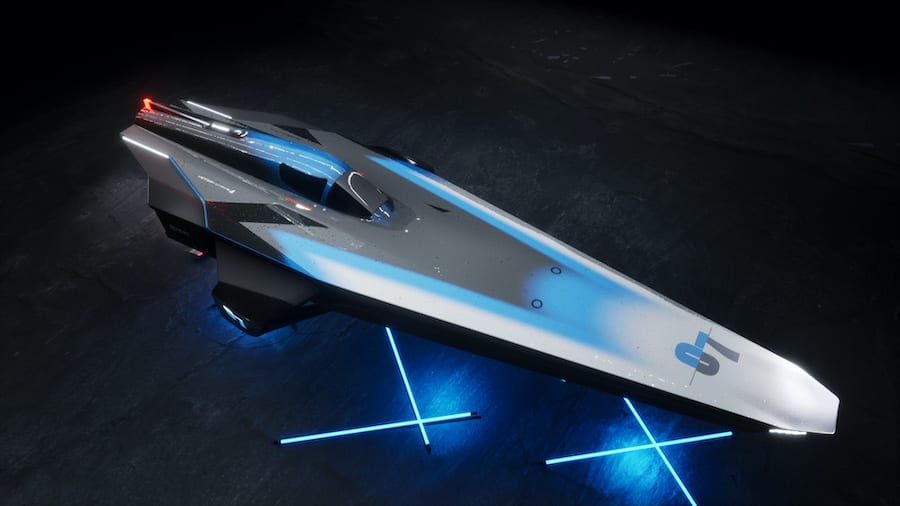 First there was the Formula E series with its electric racing cars, then the Extreme E off-road series with electric SUVs. Now, the foundations are being laid for an all-electric powerboating competition featuring the most futuristic of all designs and a mission to revolutionise the marine industry.

After the concept launch in Monaco last September, the RaceBird has been likened to a Star Wars battleship. But Monday’s unveiling of the final RaceBird design shows there is much more reality rooted in this revolutionary vision.

“There are two ingredients to the RaceBird. Firstly, the inspiration, which is nature and birds hovering above the water.” Rodi Basso, Co-Founder and CEO of E1, tells Monaco Life. “Our aim is to be as natural as possible, racing with the water not against it, using the water as an ally and the foiler to pivot the powerboat and make it faster around the corners. Secondly, the technology – we are going to inherit the state-of-the-art technology of high-end motorsports and plug it straight into the marine industry.”

Symbolically launched on 7th June, the day before World Ocean Day, the RaceBird heralds in a new era for the powerboat world, allowing for the creation of an exciting new competition – the World Electric Powerboat Series, which aims to revolutionise marine mobility and reduce pressures being placed on fragile underwater ecosystems around the world.

“The UIM, which is the only internationally recognised authority for world powerboating and which is headquartered in Monaco, is thrilled to launch the first ever World Electric Powerboat Series,” Union Internationale Motonautique (UIM) President Raffaele Chiulli tells Monaco Life. “This new flagship class will create a competitive, fascinating, challenging, environmentally friendly and entertaining all-electric powerboat racing series.”

The concept came about during Covid-19 lockdown when Alejandro Agag, founder of the Formula E and Extreme E auto racing series, and his good friend Rodi Basso, a former aerospace engineer who has worked with NASA, Ferrari, Red Bull and McLaren in Formula 1, agreed that the marine transportation world needed to catch up with the automotive world in adopting electric power. Well aware that sport is a powerful platform for making change in the wider world, they decided to create the E1 Series to not only offer exciting electric powerboat racing at spectacular venues around the world, but to drive innovation and change in marine mobility and try to leave a sustainable legacy in ports.

“Since I have the privilege of knowing Raffaele Chiulli from my previous motor racing experience, I connected a few dots and here we are just under one year later, showing the world the final design of the powerboat,” says Basso.

The RaceBird was designed by Sophi Horne of SeaBird Technologies and Brunello Acampora of Victory Marine. Using innovative hydrofoil technology, the electric RaceBird powerboat will rise above the water’s surface, allowing for minimum drag and maximum energy efficiency. It is capable of reaching speeds of up to 50 knots (93 km/h or 58 mph).

The next major milestone will be in September when the covers come off the first full-scale model at the Monaco Yacht Show, before the start of prototype testing which is set to get underway later this year. Over the coming months, Victory Marine will manufacture a full fleet of race-ready electric powerboats for a 2023 race schedule.

“E1 will race in amazing remote locations in parallel with Extreme E and also in some of the most glamorous cities in the world,” says Raffaele Chiulli. “Fans can look forward to experiencing incredible landscapes and fabulous urban water locations. The pilots for this inaugural series are expected to come from a wide range of backgrounds, with some from existing powerboating championships, and others making a transition from road vehicle electrical technology to the water, including some former F1 world champions.”

The drivers will be called ‘pilots’ because the craft effectively flies above the water. Like the Extreme E series, there will be a male and female pilot of each boat alternating between sessions because, as Rodi Basso says, “our direction is to build something modern and future proof, something that embodies all the principals that we believe in as an E team and as a UIM team.”

A total of 12 teams will be pitted against each other during 10 events per season. There will be five European city races in Monaco, London, Geneva or Zurich, Naples and Barcelona, in classic configuration.

“We show up, we build the city events, the paddock and the race for a two-day race weekend – Friday and Saturday,” says Basso. “There will also be a week-long Technology Festival exhibiting the latest sustainable technologies, and a Fan Zone to excite and engage the local population about sustainability and E1’s mission.”

The other races will take place in partnership with Extreme E, utilising the Saint Helena, a 105-metre ex-Royal Navy Ship that serves as a base and delivers Extreme E vehicles to cities around the world. Together with the electric SUVs, Saint Helena will transport the electric powerboats to compete in the E1 series in locations such as Greenland, New York City, Miami, the Amazon and the Middle East.

Rodi Basso says high-profile personalities, including Hollywood celebrities and sports stars, have already shown an interest in forming an E1 team. “I am sure even more interest will be peaked after Monday’s launch and September’s Monaco Yacht Show, but the conversations are developing very actively and we are looking forward to making a few announcements in the next few months.”

It is not just the thrill of the race that has everyone excited (although, who doesn’t want to see these boats in action?), it is also the promise of what this technology means to the future of the entire marine industry.

“Our objective is simple and clear. We want to develop an environmentally-friendly alternative propulsion system so that the yachting of tomorrow can utilise clean energy sources,” says the UIM president. “This is a real technological challenge because we want to meet the energy needs of the leisure boat but also of the shipping industry and all the accompanying environmental prerogatives. We are convinced that this series will allow significant improvements in innovation, not only in eco-friendly powerboating, which is the competition side, but also in yachting technology in general.”

With its championship and city partners, the E1 Series will install permanent electric charging posts in each port where it races that will remain after the event, serving as an incentive for the local community to move to electric boating.

“The sports industry, and particularly motorsport, strives for continuous innovation that not only creates thrilling competition, but exploits state-of-the-art technology and captures the imagination of fans. In this case, environmental protection plays a pivotal role. Striving for an emission-free marine mobility has to be the ultimate goal,” says Chiulli.

The E1 race schedule is yet to be decided, but according to the UIM, Monaco is likely to play a significant role in the competition.

It is a natural progression for a country with such a rich history in racing, from the prestigious Formula 1 and innovative Formula E auto racing, to the world’s first powerboating competition and the recent Monaco Energy Boat Challenge.

“Monaco is playing a key role in incubating new ideas, novel solutions, and eco-friendly technologies,” says Chiulli. “I see a history of cycles here. In 1904, Monaco was driving the field of innovation and imagination by hosting the first ever powerboating competition. Now, Monaco is playing a key role in developing innovative propulsion systems, using all that is alternative to traditional fossil fuel technologies to lead the way towards clean energy sources to power the yachting of tomorrow.”

During Monday’s digital reveal of the RaceBird design, Alejandro Agag confirmed that the E1 Series has secured investment from the Public Investment Fund (PIF), representing a significant step forward in the long-term development of the championship.

Local News Stephanie Horsman - June 29, 2020
The second round of the French municipal elections, held on Sunday, saw the re-election of many incumbents including Christian Estrosi as mayor of Nice for a third time.

Local News Cassandra Tanti - April 13, 2020
The lockdown in France will be gradually lifted from 11th May, however the Schengen border will remain closed for months to come.