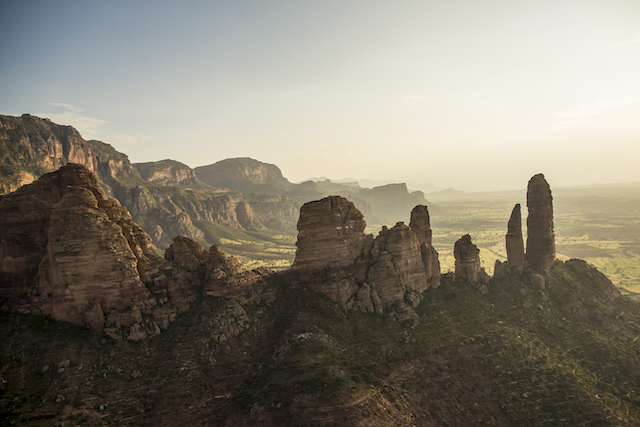 Abercrombie & Kent Founder and Co-Chairman, and Monaco Life contributor, Geoffrey Kent reveals the places he’s most excited to travel to in the new decade.

The offbeat destination being whispered about by travellers whose preferred mode of transport is the helicopter is Ethiopia.
One of Africa’s most enthralling yet overlooked destinations, this incredibly diverse country easily earns its spot on my list for this year, following on from one of my Inspiring Expeditions here last autumn. It’s rich in heritage and has a vibrant tradition of worship, as well as spectacular landscapes and compelling tribal cultures. However, due to a lack of infrastructure, the easiest way to get around is in the air.
Swoop over the stunning mountain ranges and lakes and fly to the Omo Valley – home to strikingly diverse and beautiful people such as the Kara, the Hamar, Mursi, and Nyangatom.


Meanwhile, the rock-hewn churches of Lalibela offer historical intrigue. At the same time, the other-worldly Danakil Depression and wildlife of the Simien and Bale Mountains, including Africa’s last wolves and the Earth’s only grass-eating monkeys, are a significant draw for nature lovers. All easily accessible by helicopter.

The ‘teardrop of India’ suffered a devastating blow on Easter Sunday last year and experienced an economically devastating loss of tourism as a result. But since travel bans lifted – news which couldn’t come soon enough for hoteliers and those in related service industries – this enduringly optimistic island has been bouncing back.
In Sri Lanka, charming cities, lush tea plantations and iconic wildlife vie for travellers’ attention alongside eight UNESCO World Heritage sites, great beaches and national parks. For those willing to travel sooner rather than later, there’s a rare chance to enjoy the country’s must-visit sites – such as Sigiriya and Polonnaruwa – in (relative) crowd-free peace.
Yala National Park has benefitted from this lull in tourism. Strict protocols have now been put in place by the Federation of Environmental Organisations at the behest of the government. And the wildlife-spotting experience in Yala – which is home to dozens of magnificent leopards, the biggest ones that I have seen anywhere – has been improved, just in time for the return of travellers.

For an out-of-this-world experience, voyage to Argentina in 2020 to experience one of nature’s most magnificent events: a total solar eclipse. Set to take place on 14th December, this aligning of celestial bodies will be visible from just a few South American countries.
In rugged Argentina, where the sense of vastness and isolation is incomparable, the event will briefly plunge northern Patagonia into darkness in the middle of the afternoon. Be among the few to witness this rare, magical moment and become one of the first guests to stay at the Explora Patagonia Argentina, the latest in the hotel group’s roster of exemplary eco-lodges.

Until recently, Laos was in the shadow of its more famous Indochinese neighbours. It’s often been overlooked by travellers considering a visit to South-east Asia. This country’s charm and authenticity are drawing a growing number of visitors to its lesser-travelled trails, however, and we expect the trend to continue in 2020. Step back in time as you explore this nation of jungles, temples, hill-top villages and ancient relics for yourself, free of the frantic pace of so many other Asian cities.
In 2020, view the country through a cultural lens by visiting the little-known Plain of Jars. Stretching across the Xiangkhoang Plateau, this vast archaeological site features thousands of enormous stone vessels, scattered by a past civilisation whose culture remains a mystery. While folklore suggests that the jars belonged to giants, further excavations in 2019 point instead towards a more anthropological answer: that this was once a burial ground. Visit this hard-to-reach UNESCO World Heritage Site by flying in via helicopter, accompanied by an expert guide.

After a tumultuous few years, momentum is gathering in legendary Egypt. Its mesmeric monuments, atmospheric souks, and natural wonders, which have been relatively tourist-free in recent years, are welcoming culturally curious travellers once more.
A collective breath will be finally exhaled when, in the latter half of 2020, the Grand Egyptian Museum opens to the public. Encompassing 500,000 square metres, this vast exhibition space will showcase an omnium-gatherum of Ancient Egyptian artefacts – 30,000 of which have never been exhibited in public before.
A new cinematic version of Agatha Christie’s Death on the Nile is on the horizon too, which undoubtedly will buoy interest in the country. Due for release in autumn 2020, Kenneth Branagh stars and directs, with Wonder Woman star Gal Gadot taking a turn as Linnet Ridgway Doyle. Should this inspire you to take a turn down the Nile – though, of course, in less dramatic style, my Sanctuary Nile Adventurer has been newly refurbished and is fit for a pharaoh.