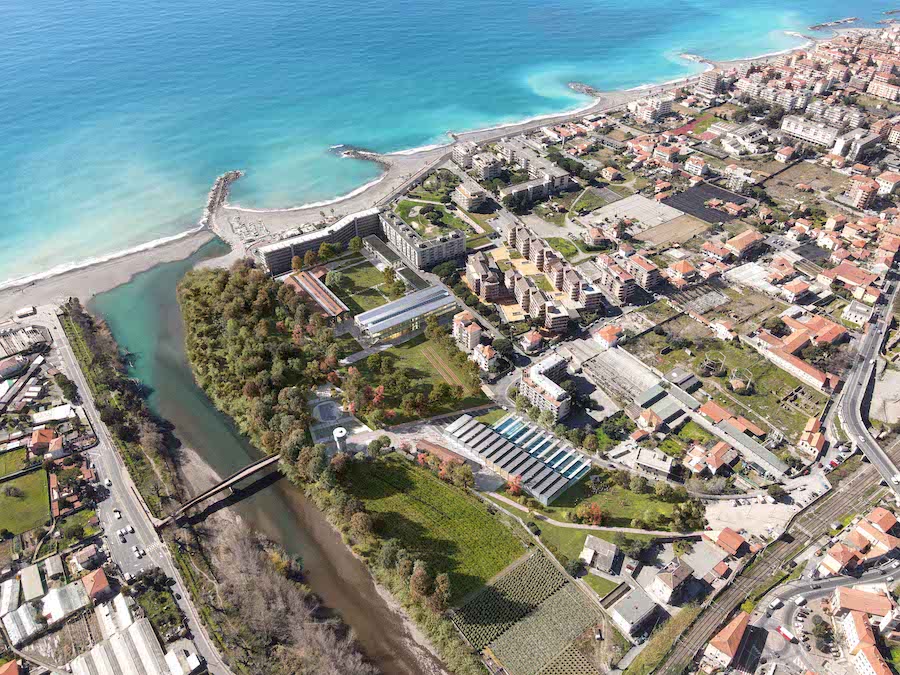 Four design proposals for the future international school, Borgo del Forte Campus, in Ventimiglia have been selected, with the final project forming a major aspect of the new urban redevelopment project that is transforming Ventimiglia.

On 23rd September, the Marina Development Corporation (MDC), an urban redevelopment company, examined the design proposals of four Italian architectural firms for the construction of the Borgo del Forte Campus in the Campasso di Nervia area in Ventimiglia.

The Borgo del Forte Campus will be situated in the former Campasso railway yard, near the mouth of the Nervia river.

The Borgo del Forte Campus will cover a total of 42,000 square metres and include a sports centre with indoor swimming pool that can be used all year round, a fully equipped gym, changing rooms, services and a dedicated club house, as well as a multifunctional area for indoor/outdoor activities and some tennis courts, all open to the public.

A multi-level building will be built next to the sports centre to house the international school – the heart of the Campus. To the south, the 1,600 square metre former railway depot building will be renovated and used as a conference centre with conference room, exhibition/fair area, and offices, all overlooking a large green park.

Finally, the former guesthouse will be renovated and used as an accommodation facility for athletes, students and teachers, and the third existing building will be equipped for reception services, offices and cafeteria. The Campus will also be able to take advantage of over 3,000 square meters of parking.

The following four Italian architectural firms were chosen for their designs: Atelier Alfonso Femia, MCA – Mario Cucinella Architects, One Works and Lombardini22 studios. By the end of the year, the design projects will be presented to the international school operator currently being selected by MDC for the management of the Campus.

“It is a great pleasure to have received today in Ventimiglia four of the best architectural firms in Italy who presented their design proposals for Borgo del Forte Campus, all of great value and responding to the requests made during the tender,” said MDC CEO Giuseppe Noto. “This confirms the relevance and quality of the Marina di Ventimiglia urban regeneration project, which we have been carrying out with local and regional administrations for almost two years, for the relaunch of western Liguria through a new hotel, residential and educational-sporting offer.”

Borgo del Forte Campus is an integral part of Marina di Ventimiglia, the large urban regeneration project presented in April last year by MDC, aimed at creating a new tourist destination on the seafront of the western Ligurian city and breathing new life to the Italian Riviera.

Marina di Ventimiglia will be developed on a total area of ​​57,000 square metres, with an investment of over €200 million, and it includes several ambitious projects, the main one being Borgo del Forte. It forms part of ​​Marina San Giuseppe which is located behind the port of Cala del Forte, inaugurated last summer and owned by the Port of Monaco. Here will be built a five-star hotel with 25 suite rooms, as well as gym, wellness centre, restaurant, and 130 apartments for sale, all equipped with large terraces. The intention is to create a community that is active and lively all year round.

Other main developments include the construction of a panoramic restaurant called La Rocca, which is close to being built, and Club Italia, transforming the former ACI building into a food and beverage centre of excellence.