Winner chosen at Junior Economic Chamber’s ‘Get in the Ring’

For the fourth consecutive year, the Junior Economic Chamber of Monaco – which focuses on the areas of Training, Entrepreneurship and Networking – organised the Get in the Ring competition.

The day’s training on Friday, December 1, started at 8:30 am, with a working breakfast with all the incubated startups of MonacoTech. Throughout the day the candidates were coached by high-level mentors in a highly-charged but studious atmosphere.

At the end of the first round of the competition for start-ups, six candidates were selected to go on stage in front of the Grand Jury later in the day: Hyve, Wafer, Coviago, O’Sol, Zappik, and Onhys.

The winner, Onhys, which specialises in modelling urban regeneration plans, is now directly qualified for the global final of the Get in the Ring competition to be held in March 2018 in Carcais, Lisbon.

Night bus service to be much improved,... 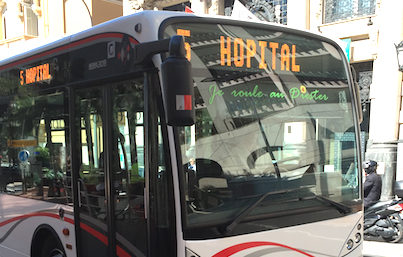 From Tuesday, June 5, at the same time as the Boulevard des Moulins bus corridor will be tested to improve traffic flow in this area and to reduce travel times for lines 1 and 4, the Compagnie des Autobus de Monaco (CAM) will adjust the schedules of several other lines. The goal is to maintain the average frequency at 10 minutes on the main bus routes (1,2,4,6) while also better serving commuters in the morning and afternoon. Meanwhile, the night service will be split into two routes in order to provide a much-improved service for users. Night Line 1 will run from Fontvieille to Larvotto and Saint Roman, which is a mix of lines 1 and 6 operating during the day. Night Line 2 will run from the Jardin Exotique on a North-South route, which is strictly the same as Line 2 during the day. These two lines will operate with a frequency of 35 minutes. The schedules have been designed so that the buses arrive at the same time at the stops Princesse Antoinette and Monte-Carlo to ensure a smooth connection for travellers.