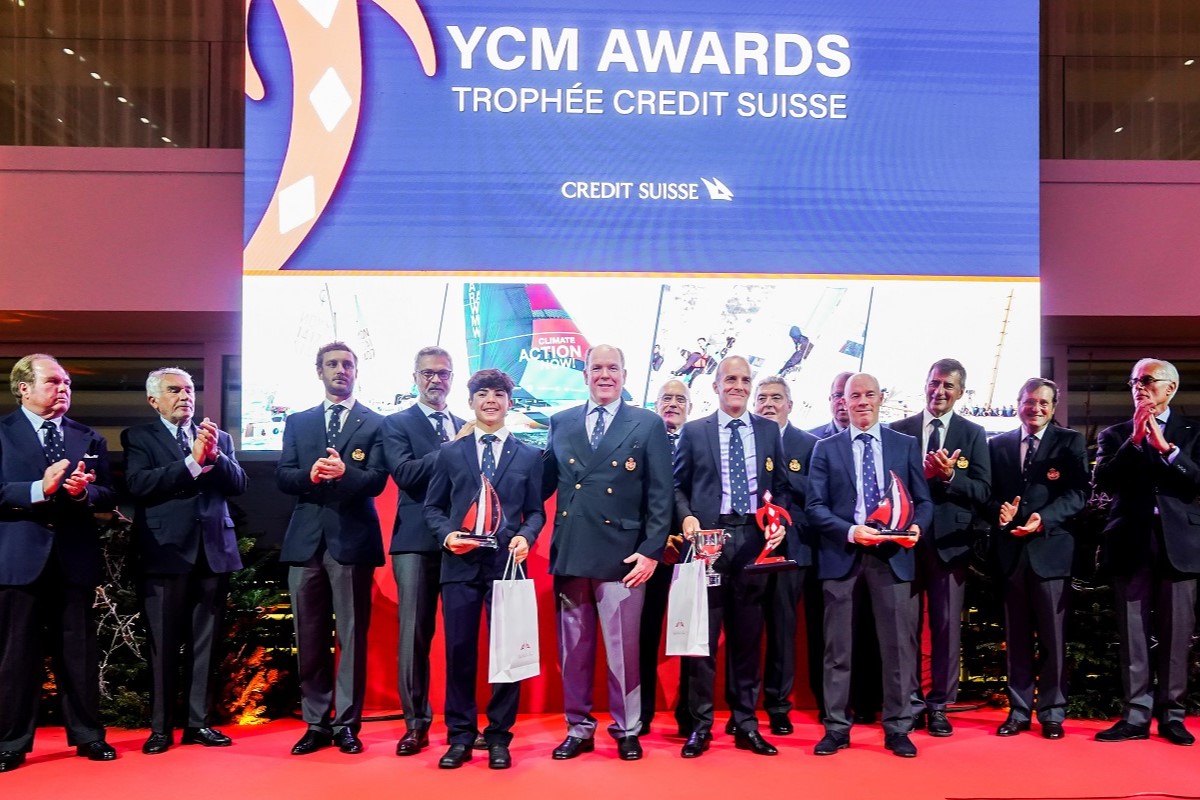 The achievements of mariners from Monaco and around the world have been celebrated at the Yacht Club de Monaco in an event that commended an excellent 2022 and forecast another exciting year to come.

The Yacht Club de Monaco (YCM) rounded off a triumphant year of events and titles with a glittering Winter Cocktail evening on 21st December and Prince Albert II, the president of the iconic yacht club, on hand to award the coveted Trophée Crédit Suisse to the Sailor of the Year.

That accolade went to Frenchman Pierrik Devic, a much admired sailor and charter broker in Monaco, who became World Vice-Champion in the J/70 series in 2022 and stood out from a prestigious group of international nominees for his “remarkable consistency all season”.

“I am very touched to receive this award, which I dedicate to my crew, without whom I would not have won it,” said Devic. “It represents 60 days on the water together. It’s a fixed team and I wanted from the start to create a good atmosphere on board. Above all, we are good friends who want to have fun on the water. It’s just magical”.

Also in line for congratulations were two YCM members who competed in the 12th Route du Rhum towards the end of 2022: Oren Nataf and Boris Herrmann, the latter of which will soon head to Alicante for the start of The Ocean Race.

“We were very proud to have two boats flying the YCM flag on the start of this prestigious transatlantic,” said Prince Albert of the Route du Rhum sailors.

An award for promising young talent went, for a second time, to Noah Garcia. Still just a teenager, Garcia excelled in 2022 during the ILCA 4 and won the French Champion title.

An adventure in the Antarctic

Beyond the prizes, the two yacht club members Fabrice Papazian and François Miribel took to the stage to present a photobook of their adventures into the Antarctic region aboard the Boréal 47 Sir Ernst. The proceeds of the book will be donated to a research institute for childhood cancer.

“After spending nearly a month in the Antarctic as far as Marguerite Bay 67° South, we sailed in the Patagonia channels in the southern winter,” said the yacht’s owner, Miribel. “We are getting ready to do another trip over there before heading back to the Mediterranean to prepare another polar expedition in two years’ time.”

A full calendar of events

With 2023 marking the 70th anniversary of the YCM, which was founded in June 1953 by then-sovereign Prince Rainier III, members and supporters of the maritime institution can expect a full calendar of events over the coming 12 months.

Sustainability highlights include the first ever Monaco Smart Yacht Rendezvous on 23rd and 24th March, which promotes the need for eco-focused technological innovation at each stage of a yacht’s life cycle, as well as the 10th Monaco Energy Boat Challenge from 3rd to 8th July. The week-long event has a number of exciting additions to its programme this year, from the first ever e-Boat Rally to a new mentoring service that encourages the yachting industry to back young minds in their innovative studies and experiments.

The all-time favourite Monaco Classic Week from 13th to 16th September is set to be an exceptional celebration of maritime heritage, with a stunning display of vessels from classic sail yachts to period motor yachts and vintage motorboats.

For more information and the full programme, please click here.