Home News Local News Yes or no, is sushi good for you? The answer is not...

Yes or no, is sushi good for you? The answer is not that simple 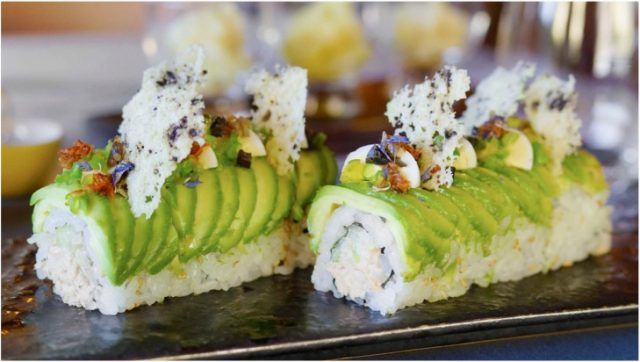 Monaco has its fair share of high-end sushi joints, from Buddha Bar to Moshi Moshi, as well as the Planet Sushi franchise, all of which offer freshly prepared on site variations of the Japanese rice delicacy. And although International Sushi Day isn’t until June 18, I am often asked how healthy is sushi and how often should you eat it?

As I tell my clients, for me there’s no one answer.  From my own experience, sushi weighs in somewhere in the middle on the it’s-good-for-you scale. But depending on the ingredients, the food source, and how and where it’s prepared, sushi can be very good, very bad or just a waste of calories.

Fresh cold water fish, such as tuna, salmon and trout, are rich in Omega-3 fatty acids and proteins and that’s good for you, and depending on the type of fish, it may also have varying amounts of vitamins A and D, magnesium and calcium. Also good for you. However, the fish may also contain mercury which is NOT good for you.

Fresh vegetables, often an integral part of sushi, are loaded with healthy vitamins and minerals. Great, but … they may also contain herbicides, pesticides and other “cides” you don’t really want in your system.

Essentially, this means that sushi by name does not equate healthy eating. You need to be careful.

Avoid deep-fried sushi. Let’s be honest, deep-fried anything, with the fat, salt and high temperatures, is unhealthy (even if tastier). Deep-frying vegetables robs them of their beta-carotene and vitamin A, as well as other nutrients.

Skip the sauces. Sauce can mask the true appearance and taste of fish, vegetables or rice, especially when they are of inferior quality.

Take smaller rice portions. Rice is the cheapest ingredient in sushi, so some restaurants use higher proportions. Sushi rice tastes different than ordinary rice because of the added vinegar, salt and sugar.  Depending on the origin of the rice, it may contain high quantities of arsenic.

Investigate the ingredients. The quality of the ingredients is crucial. Don’t be afraid to ask the chef how much salt, vinegar and sugar is used. Ask about the origin of the fish and whether it is organic, ditto for the vegetables.

Also note that fish farmers frequently add chemicals to make the fish larger and more attractive, so you may want to inquire whether the fish is farm-raised or wild. Pink dye, is almost always added to farmed salmon feeding, to give it the same colour as wild salmon because consumers shy away from buying white salmon.

The clean and fresh test. Even the most nutrient-rich food can give you food poisoning if the kitchen is filthy or the ingredients are not fresh. With fish this is even more important because sushi tends to be uncooked, which raises the risk that infectious pathogens (such as Hepatitis A and Vibrio vulnificus) remain in the food. Once again, if there’s too much sauce, ask yourself what is it hiding underneath. When it comes to sashimi the rules are pretty much the same. Use your common sense.

The bottom line is that nutrition is complex, and you should be asking yourself what makes certain foods healthy or unhealthy and under which circumstances. My preference is to avoid sushi from large commercial chains and supermarkets (although Carrefour in Monaco prepares the sushi fresh in the store), in favour of eating sushi when I know how and where it is prepared.

Are you a Monaco grazer?