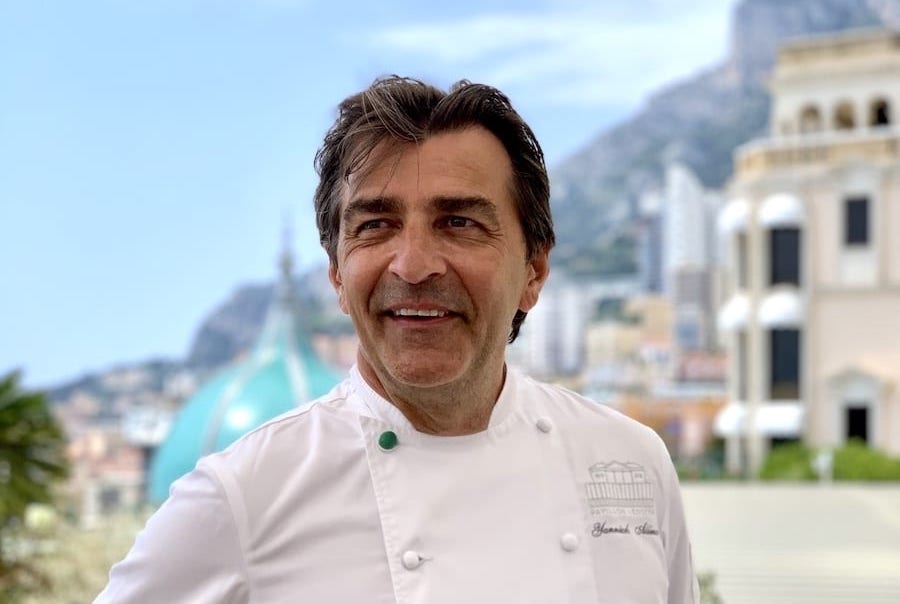 It’s been announced that the doors to the highly anticipated Pavyllon restaurant by Yannick Alléno at the Hermitage Hotel will open on 15th April, a mirror of its three Michelin-star sister in Paris.

The ‘Leader of modern cuisine’ was welcomed to Monaco in early 2021 when the Vistamar restaurant was rebranded as ‘Yannick Alléno at the Hôtel Hermitage’.

For 12 months, the French chef, who currently holds 14 Michelin stars, and his team have been serving guests Mediterranean-inspired cuisine with that famous “Alléno touch”.

But eyes were always fixed on the end game, when the restaurant would be completely revamped at the imagination of Chahan Minassian, who designed the Pavillon Ledoyen in Paris where Alléno holds six of his stars in three restaurants.

Minassian has recreated in Monaco that unique restaurant design around a large custom-made bar facing onto an open kitchen, where guests can feast their eyes and taste buds on the delicious plates being prepared. It is designed to be a place of transparency and serenity, where guests can get as close as possible to the kitchen from the comfort of the bar, and without the usual formality of fine dining restaurants.

The Pavyllon is also designed to maximise its elevated position and the famous Riviera weather, so the sea-facing terrace remains with its potted plants and views of the Mediterranean, the Palace and the Rock.

Inside, tables line the large patio windows of an elegantly designed space.

“We have the same approach, Yannick on the plate, me with space,’ said Chahan Minassian. “We complement each other naturally, and for this project we worked hand-in-hand.”

While the restaurant’s design has changed, Yannick Alléno’s signature modern cuisine has not. Guests can continue to expect an array of hot and cold dishes, some 100% plant based, all made essentially from local ingredients. Examples include vegetable ravioli with spring broth and olive oil for starters, and line-caught fish-and-chip-style whiting for main. Tasting menus are also an option.

Yannick Alléno’s famed sugarless desserts also feature, like the wonderfully light and innovative ice creams that are whipped at the table, or the meringue soufflé with vanilla “caviar”.

“I am delighted to open Pavyllon at the Hôtel Hermitage Monte-Carlo,” said Alléno in a statement. “There is a real place for this cuisine with the taste of the Riviera in the Principality, in a stylish and informal atmosphere, and I would like the residents of Monaco to take ownership of this restaurant.”

Yannick Alléno belongs to the exclusive circle of the world’s greatest chefs. In 2013, he was brave enough to reinvent that great French classic, sauces, with his innovative “extraction” process. In July 2014, he took over Pavillon Ledoyen on the Champs-Elysées in Paris and opened Alléno Paris. After just seven months, he was awarded three Michelin stars. He is now the only chef to head two triple-starred restaurants in France, Alléno Paris and 1947 in the Cheval Blanc hotel at Courcheval.

“Our palace is continuing its reinvention while capitalising on its exceptional heritage and its status as an emblematic venue close to Place du Casino,” added Louis Starck, Managing Director of the Hôtel Hermitage Monte-Carlo. “Creator of exceptional moments for lovers of elegance, the connoisseurs’ hotel is happy to add an exciting culinary experience for both Monegasques and our international visitors.”

What to expect from Monaco’s most anticipated new restaurant