Monaco Life was privileged to be invited to the official welcoming of Yannick Alléno by Alain Ducasse at Le Louis XV. This is what lunch prepared by the world’s greatest chefs looks like…
When SBM CEO Jean-Luc Biamonti announced that Yannick Alléno would be taking over the restaurant at the Hermitage Hotel in spring, the question on everyone’s lips was … “How does Alain Ducasse feel about this?”
As the world’s most starred chef heading Monaco’s most starred restaurant – Le Louis XV at the Hôtel de Paris – it seemed only natural that the arrival of a younger, more contemporary and equally revered chef might take some of the air out of Ducasse’s souffle.
Perhaps that is why, on Monday 17th May, Alain Ducasse was the one to officially welcome Yannick Alléno to Monaco, and he did it in the most symbolic way possible – by opening his three Michelin-starred kitchen to the 52-year-old chef and his team from Paris for an historic lunch to be swooned over, photographed and written about by an exclusive selection of media, many from as far as Paris. 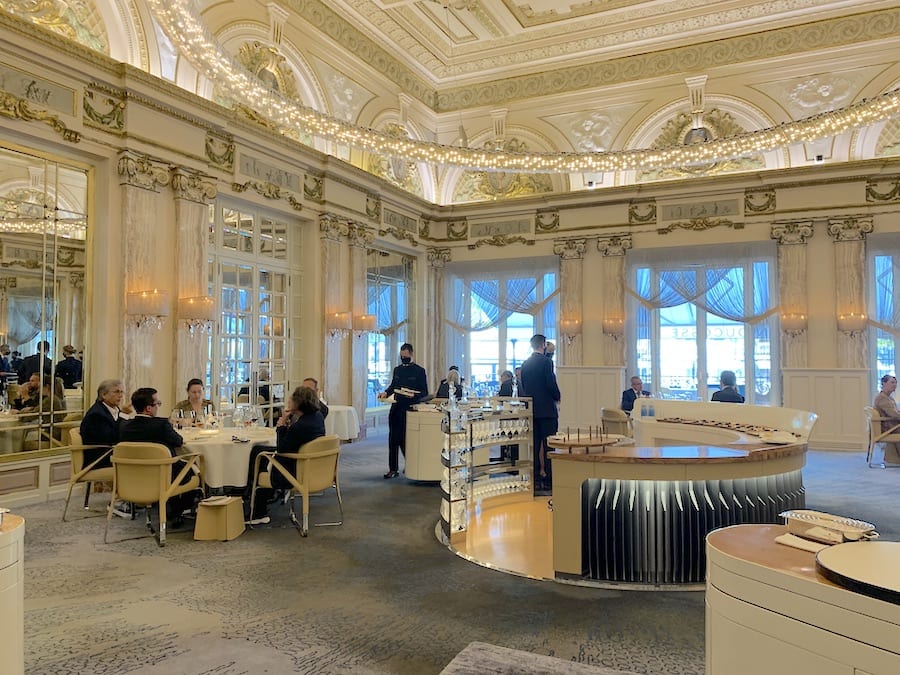 And the message was clear at a pre-lunch press conference: “There is no competition between us, we are complementary,” said Alain Ducasse, adding: “Yannick Alléno and I are 1+1 = 3”.
It is their roots in French cuisine that gives these two chefs the same DNA, but it is also a sense of obligation to pass on their incredible knowledge to a new generation of chefs where these legends of the culinary world also find a mutual connection.
“We have a responsibility to French gastronomy, to the younger generation to pass on our knowledge to them,” Yannick Alléno told Monaco Life.
“And to publish our knowledge, this is important for the future of French cuisine,” added Alain Ducasse, who has authored many books including the Alain Ducasse Culinary Encyclopaedia.


64-year-old Ducasse was born in France and naturalised as a citizen of Monaco in 2008. With 21 Michelin stars under his name, countless restaurants across the world including in Paris, London, New York and Tokyo, and two cooking schools – one of which works with the European Space Agency to develop astronaut meals to take into space – it is understandable why Alain Ducasse is dubbed “the godfather” of traditional French Cuisine.
Meanwhile, Yannick Alléno was born just outside of Paris and currently holds 14 stars, six of which have been attained at his three restaurants within the Pavillon Ledoyen in Paris, including the three Michelin-starred Alléno Paris. He has also authored many books, most recently one titled ‘Tout doit changer’ or ‘Everything must change’, a book that discusses the future of fine dining and gastronomy.
It is the evolution of a revolutionary approach to long-held traditions that began for Yannick Alléno in 2013 when he made it his life’s mission to modernise the pillars of French cuisine, to combine the perfect techniques of tradition with real creative ambition, to study and experiment, and to create a new culinary movement: Modern Cuisine.
The most obvious pillar – sauces – has been transformed by is his trademark process of extraction.

It is this offering of classic and modern, Ducasse and Alléno, that makes Monaco the big winner in this equation. It is a play of contrasts and similarities that were put on show at Monday’s celebratory lunch at Louis XV.
It began with Alléno’s langoustine with curry and black lemon, enlivening the tastebuds for Ducasse’s picture-perfect plate of farm vegetables and crunchy wheat.


To finish, an incredibly light meringue soufflé with vanilla “caviar” ice-cream from the hands of Alléno, and a visually dramatic raspberry and matcha ice-cream by Ducasse.


Each dish was carefully paired with Dom Pérignon vintages 2010 and 2002, Saint-Emilion Grand Cru 2000, and a Moët & Chandon Grand Vintage Rosé 2012.
Overall, it showed a winning formula for Monaco. To have a Ducasse restaurant and an Alléno restaurant within metres of each other is clearly no competition, but a major drawcard for the Principality.
‘Yannick Alléno at the Hermitage Hotel’ opened to the public on Wednesday 19th May. Monaco Life was once again welcomed for an exclusive opening lunch. Stay tuned for the next story, when we take you inside Yannick Alléno’s new restaurant in Monaco.