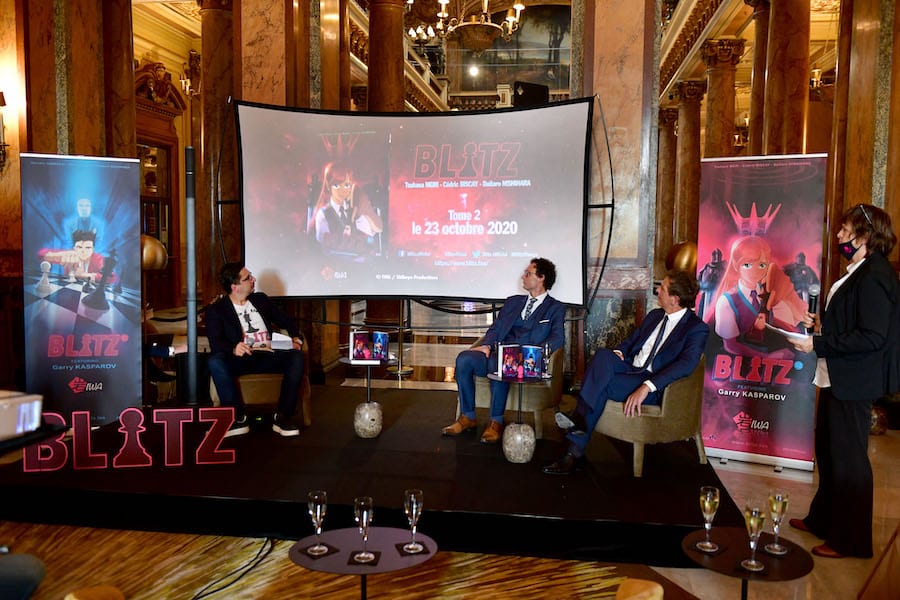 Volume two of the only manga to be produced out of Monaco, Blitz, hit book stores last week. We caught up with its creator and co-author Cedric Biscay to learn more about the groundbreaking series and how Monaco fits into this new and exciting world.
On 22nd October, Cedric Biscay and his team launched the second edition of Blitz, the latest in a manga series about a group of young chess players competing in a tournament that takes its hero to the legendary Monte-Carlo Casino. The manga was created in collaboration with the greatest chess player in history – Garry Kasparov.
Cedric Biscay is the CEO and Founder of Monaco-based Shibuya Productions, responsible also for the triumphant comeback of the Shenmue saga in 2019 on PS4 and PC, winner of three world records in the Guinness book, producer of the multi-award-winning documentary Sad Hill Unearthed on Netflix, and the upcoming Astroboy Reboot series. This year, he is the recipient of the Japanese Foreign Minister’s Certificate of Honour.
Monaco Life: How long did it take to complete Blitz volume two? Was much of it done during lockdown and did this affect the story in any way?
Cedric Biscay: It took six months to complete. Unfortunately, we lost valuable time due to the quarantine regarding the release date. Ideally, we want to make a volume every four months.
The lockdown did not affect the story, however it did enable me to progress faster on volumes three and four.
How successful was volume one?
To date, we have sold more than 7,000 copies in France, which is very good for a volume one of a new series, especially considering the quarantine has affected volume one in two aspects.
Firstly, there were transport and logistics problems. Secondly, a Monegasque company is currently not allowed to sell directly on Amazon. As a result, there were no Blitz sales for almost three months. However, I believe the situation with Amazon is evolving favourably, according to my information.
How does volume two differ from the first edition?
The main aim of the first volume was to set up the characters and the story.
In this second volume, we enter deeper into the chess games. I wanted to make them punchier and more fun, so I asked artist Daitaro Nishihara to imagine the characters on a battlefield during the most striking games.
The characters imagine themselves as real chess warriors and it brings a lot of fun and intensity to the games.
It is important to mention that Blitz can be read by everyone. It is not necessary to know anything about chess, so we’ve added in the bonus section some explanations about chess games and a glossary. 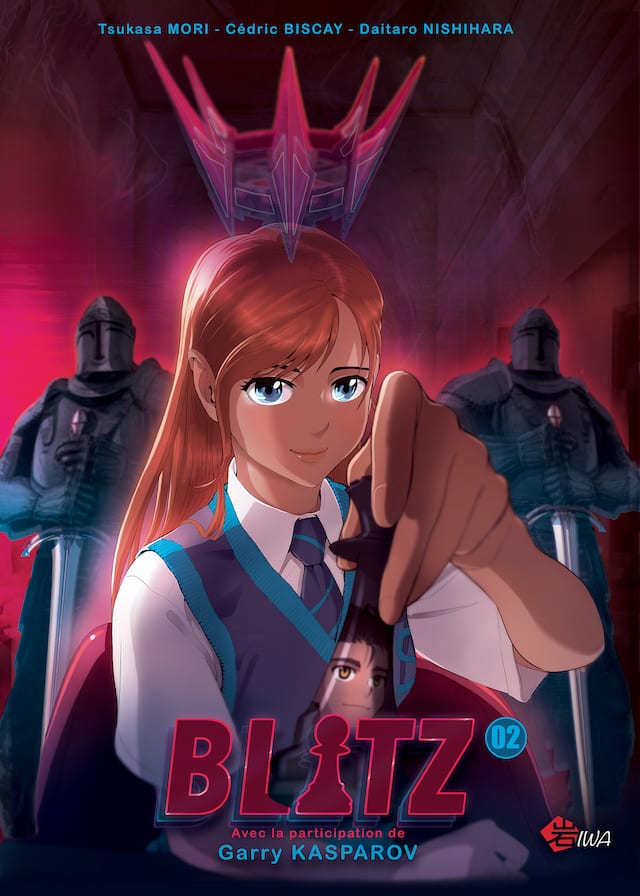 The first book was revolutionary because you collaborated with Japanese artists, and this one has gone one step further, with collaborations between Monaco, Japan, France and the United States. Do you feel you are breaking ground in the world of manga?
As a matter of fact, yes. We are innovative in the sense that even if Blitz follows the manga’s codes, the way it is made differs a lot from the usual standards.
And we must be very careful to avoid mistakes in our exchanges between French, Japanese and English.
I am convinced that Blitz can bring a breath of fresh air into the world of manga, not only through the subject matter, which is truly original, but also through the unique multi-cultural vision it brings.
The fact that Garry Kasparov is involved also gives it a lot of credibility, and not forgetting the contribution of Alexis Champion who, at the end of each volume, gives the keys to develop personal intuition. I don’t think I can say it enough, but Blitz is also a manga about intuition.
I enjoy proposing several levels of reading whether it is for children, teens or adults.
By the way, when I participate in autograph sessions, I can see that the profile of readers is incredibly varied, and it makes me very proud.
Do you touch on any social issues in the book?
It’s a big word to say that we are actually addressing social problems, but our characters are not flat.
The hero, for example, does not ‘fit the mold’. In Japan, where there are strict codes of conduct, we can see that he is not particularly appreciated by the teachers and some classmates at the beginning.
The same goes for the main female character – she is tough and not a girl who stands by the hero or is a ‘trophy’.
It is important that everyone can identify with the characters they want and show that whether you are a girl or a boy, you can be a badass.
Also, while it is too early to talk about it specifically, there will be a disabled character who also appears in the story.
We are all anxiously awaiting Astroboy Reboot. Do you have any idea of when it will be released?
I get so many messages from fans about this project. Obviously, I understand their frustration since we can not communicate on it due to various NDA’s signed with a major US company.
But I can say that the situation is evolving and I hope to be able to make some announcements by the end of the year.
The most important thing to remember is that we have been working on it since day one, even though it is very long and external factors sometimes simply prevent us from communicating fully with the fans in a way that keeps them informed in a concrete way.
Astroboy is an iconic manga and I absolutely respect its author Osamu Tezuka. It is unthinkable for me not to provide the best for Astroboy Reboot. My mission remains the same – to deliver a beautiful series and broadcast it as widely as possible around the world.
Can you reveal what is next in the Blitz series? Do you envisage it being a large series?
I do not want to reveal too much of course. But I can say that qualifying for the tournament will continue and although the main plot is in Japan, the Principality of Monaco will continue to be shown.
The Monte-Carlo Casino has been drawn for the first time in volume two, thanks to our partnership with the Monte-Carlo Société des Bains de Mer (SBM). It will also be featured on the back cover of volume three.
It is very important for me to have part of the story here in Monaco. I think it is great to see the Principality of Monaco in a manga and I think it brings additional value to Blitz.
I am also happy that the Monegasque authorities appreciate it and find it fun to see Monaco in a totally different universe than usual.
Shibuya Productions is a Monegasque company and we are totally committed to the “Monaco team”. The more we talk about the Principality of Monaco in general, the more beneficial I think it is for local companies and institutions.
Ideally, I would like Blitz to reach a little more than 20 volumes, which is what I think is needed to tell the story properly.
Do you plan to release this manga in other countries?
Yes, I think it is of major importance for Blitz IP.
We have already had an online publication on Shonen Jump Plus in Japan. We are also targeting China, USA and all countries that have a developed manga market in general.
We are currently looking for publishing partners abroad to allow us to make Blitz known to as many people as possible. I receive a lot of messages from manga fans or chess enthusiasts overseas who are waiting for a translation in their country. We are working on it!
Is there anything else you would like to share with our readers?

Well, I want to say thank you for taking the time to read this article!
I hope all Monaco Life readers will be able to read Blitz and enjoy it. See you on 26th February for volume 3!