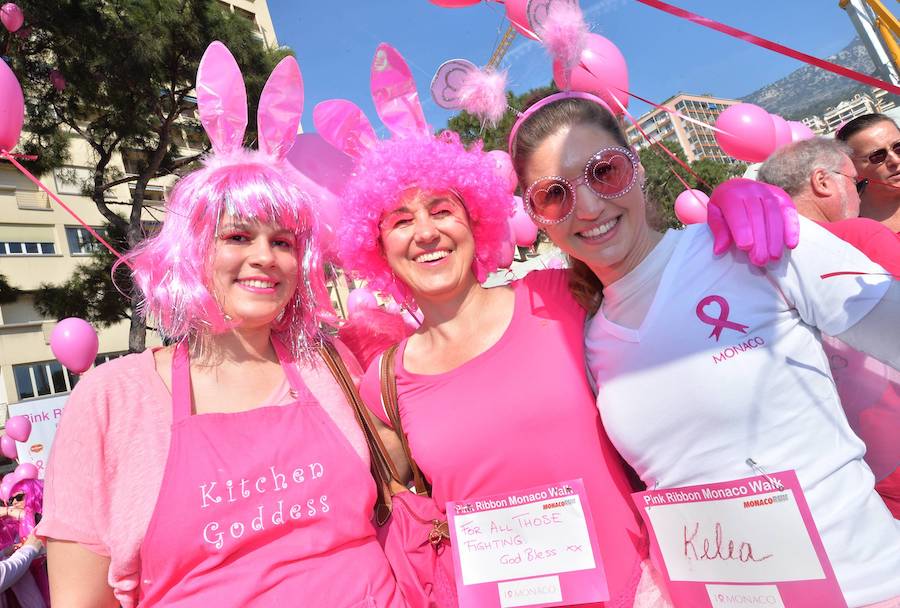 On 16th February, a wave of pink will sweep through the Principality as hundreds of people join the Pink Ribbon Monaco Walk to raise awareness about breast cancer and the importance of early detection.
Monaco Life spoke to founder Natasha Frost about this year’s event.
Monaco Life: The Pink Ribbon Monaco Walk is fast approaching, are you excited about this year’s event?
Natasha Frost: Absolutely. It is getting more and more momentum as the years go on, in fact it is hard to believe that we are already on our 9th walk. We are apparently referred to in some media as one of the “most anticipated” events of the year in Monaco, so I think that reaffirms the fact that the walk has become part of the calendar in the Principality, and I am very proud of that.


As the Pink Ribbon Monaco founder, how does it make you feel to see so many people come together to support the walk?
It is wonderful, and I think one of the main contributors is the fact that breast cancer awareness has really taken off. It is also the joint message about support, which is why I really started Pink Ribbon Monaco in the first place, to take the commercial aspect out of it and bring it back to its roots – this was of course back in the days before there was the whole women’s support movement, which is what we have now. But back then, when I was living in LA, my mum used to take me to these walks and I had never seen such an assembly of women supporting each other and helping each other out. It was much more than breast cancer awareness, it was a support group, and that is what I wanted for Monaco, and that is what it has become.
While this walk is for breast cancer, it doesn’t stop there. We have people with all kinds of cancer and many different reasons why they are getting together. It is also a family event, only five kilometres in distance, so it is a great excuse to go outdoors and get a bit of exercise.

How many people are you expecting this year?
The highest we ever had was 400, but it depends so much on the weather. The walk this year has been moved to Sunday 16th February – the first weekend of the school holidays – so hopefully we can get people before they jet off on their skiing holidays. If the weather is nice, we are expecting around 350 participants.
For the people who can’t get there on the day, how can they support the cause?
People can donate or buy merchandise, and even a simple thing like following us on Instagram helps us incredibly in finding sponsors for our big events. Also, people can support the cause by simply spreading the word, encouraging people to get tested. Everyone should be taking advantage of the amazing breast cancer screening centre here in Monaco, which is free. There is no excuse not to do it. So, let’s talk about it, like the Pink Ribbon Monaco Page, donate, participate and wear pink!
Where does the money go that is raised through the walk?
In its early days, we never did fundraisers and money generated from our events was mainly re-distributed in other awareness campaigns such as conferences, pamphlets and the like. In the last few years though we have raised funds for the Princess Grace Hospital, and will continue to do so this year in new fields which will be announced shortly.
What are some of the best outfits you have seen participants wear over the years?
I think the funniest we ever saw was a grandmother and her three grandchildren dressed as pink flamingos, that was just fantastic.
The most emotional race was two years ago when it was pouring with rain, and those who were dressed up were drenched in a matter of minutes. There was so much powerful emotion in that walk because people who came, who braved the elements, were really there for a reason.
We are hoping we will get lucky with the weather this year, but that is something you can’t control, and besides, we have beautiful pink umbrellas we will be selling on the day!

With so much awareness about early detection, why are these kinds of campaigns still necessary?
Some of the main reasons people don’t get checked is because of the taboo and because they are scared of hospitals. But going to hospital isn’t always a bad thing, it is just a check-up. So, let’s take away that fear and take away the taboo of talking about “women’s illnesses”.
What else can we expect from Pink Ribbon Monaco this year? Because you really raised the bar with your October documentary screening featuring Jodie Foster…
Well, we are already working hard on planning our October event and I can reveal, as a little teaser, that we are in discussion with another Oscar winning actress. We want to continue to present people who are glowing examples of how to inspire other women to crack the glass ceiling and help each other out.
Hopefully with the patronage of HSH Prince Albert once again, and another high-profile actress, we will continue to raise awareness about breast cancer screening and get the message out there.
Do you have a final message for female our readers?
Go and get tested, and encourage other women to do so too. Let’s all take away the fear of screening and understand that getting tested could save your life. You have an 80% chance of being cured if it gets detected in time. Your chances of recovery are great if you just nip it in the bud.
To register and donate, click here.
To like Pink Ribbon Monaco Instagram, click here.
Read also: