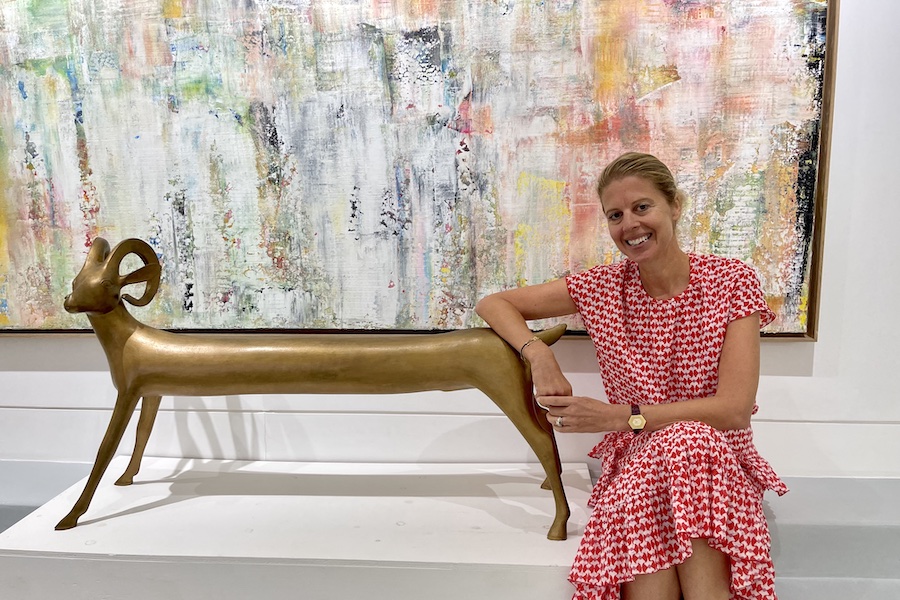 Louise Grether has forged a strong reputation in the Monaco art world, initially opening Artcurial’s first gallery space in the Principality before realising the same milestone for Sotheby’s auction house this summer.

The British-native spoke to Monaco Life about the strides made here in the art scene, and how demand among a younger generation of residents is driving the Principality towards a very vibrant  future.

Monaco Life: What made you make the move from Artcurial to Sotheby’s?

Louise Grether: Well, I was ready for a new challenge. Sometimes you have to push yourself into something that you wouldn’t naturally do. I was so attached to Artcurial, I really was, I found it so difficult to make that decision. But I was ready for a new challenge and I could see that it was something similar to what I had done in the past – moving from an office to a gallery space, and I knew I could do it. Sotheby’s is also the number one auction house worldwide, so it made sense. Meanwhile, Mark Armstrong has been here for 40 years, he’s a walking encyclopaedia of knowledge and context.

Can you describe for us some of the big changes you have seen in the Monaco art world since you arrived in the Principality seven years ago?

I think with the opening of the mega galleries, such as Hauser and Wirth, the art offering in Monaco is really stepping up now and people really consider it as an art destination. It’s always had a lot to offer on the cultural side: the ballet, the opera, et cetera. And now they have these great galleries.

I’m the president of Monaco Art Week, which is an association for all the galleries and institutions to unite under for joint events, and we noticed that this year, which is the 4th year, we’ve had an awful lot of interest and success. Art Monte-Carlo was also a great success at the Grimaldi Forum. There are a lot of new residents moving in; there’s a younger crowd. People are starting to buy art here and show us the most wonderful collections that maybe they would have shown in the past at Paris or London.

So, this year’s Monaco Art Week was a success?

Absolutely. It’s a lot of collaboration, which is very important, because we’re all different galleries here offering totally different styles of art. Even in terms of Sotheby’s and Artcurial, it’s probably quite rare that we’ll come into competition with each other, so we must all work together for the good of the Principality at the end of the day. There are no points for working on the sides. We can really collaborate and operate together and that was the principle behind Monaco Art Week.

Is it a similar situation in other cities, or do you think this collaborative approach is unique to Monaco because of its size?

In London, for example, there is Mayfair Art Week, which is very similar; there’s Marrakesh Art Week, and Paris Art Week on a larger scale. But in Monaco, we are such a small Principality, it’s so condensed that you can actually go around the whole of Monaco in one day with your collectors and seek out the best artworks. And it’s wonderful that Hauser and Wirth are here, it is such a great gallery, and I’m sure more will come. In fact, I have no doubt – I’ve heard of one or two large galleries who are thinking of coming, big names that are actively looking for space.

I also think that here in Monaco, we must focus on educating people, and one of our goals here at Sotheby’s is to make sure that everybody is welcome. We organise little workshops to talk to people; we organise masterclasses on Sotheby’s diamonds, for example; we’re permanently organising workshops with our luxury experts who are coming in to talk about how to start a collection, et cetera. Hauser and Wirth do it well, they organise a series of lectures. At Artcurial, we used to arrange workshops for six or seven ladies who would come with their handbags and we would show them how to spot a fake, we’d also talk about it from an investment point of view – ‘Are these bags really worth buying and holding on to?’ It’s all very interesting.

What is your vision for Sotheby’s Monaco?

We have a very interesting calendar of events. We have just had local Franco-Iranian artist Sassan Behnam Bakhtiar, a wonderful contemporary artist, for the month of September. Then at the end of September during the Monaco Yacht Show we had some old masters come in, some wonderful works for a week. We’re also collaborating with Alexander Kraft, owner of Sotheby’s Real Estate France and Monaco. He has a clothing line and he’s very into luxury: he has a wonderful collection of watches and cars. So, we will be organising an expertise day at his hotel La Maison Bleue in the Var where he is going to show his clothing line in October.

I think we really must bring in new and interesting ideas connected to art. It has to be a place that’s vivant, as you say French. That’s why it’s important to do it in Monaco, because people want to come here and live the lifestyle.

We’re not ruling out any auctions that might make sense in Monaco in the future. But everything in this gallery is for private sale, so that’s a different way of working. It’s a different way of negotiating with people, of deciding with clients whether they want to put something in a private sale or at auction. I think a lot of people prefer to sell it private sale, or at least have the choice, because it’s more confidential, there’s possibly more of a guarantee – you’re not taking quite the risk that you might if you’re putting something at auction with an attractive estimation.

Sotheby’s are very flexible and they’re definitely working with the times. Everything is digitalised, there are no catalogues these days. It’s difficult for some people, particularly for the older generation. But that’s the way it is today – everything is quick and immediate. Buy now. That’s why I admire Sotheby’s, they took the plunge and it works.

What about digital finance and NFTs?

Yes, they’re leaders in NFTs, crypto and digital. But I don’t think it’s coming to Monaco just yet, I need to understand that a bit more. I prefer to focus on the physical object.

In terms of the current geopolitical situation and Covid-19, what impact have those had on the art market?

I would say they’ve had a very positive impact because people are seeing art as a safe haven, a good investment – we’ve never had such great sales. The auction houses, if you look at their results, haven’t suffered at all. It’s very interesting, actually. But I think it’s a safe investment for most people, even things like watches and jewellery, and particularly diamonds this year.

Where do you see the future of the art industry in Monaco, and what are you most excited about?

I feel very positive about it and I know that everyone I’ve spoken to here, the directors of the galleries, we’re all in this very positive movement to make sure that Monaco is really stamped on the map as a place to be for the art market, and I can only see things getting better.

There are a lot of people who really want to make it work here, and I know that even collectors have changed their mindset about what’s on offer here. And that’s one of the first steps, I think. From what I can see, they’re really respecting what the galleries are doing in Monaco and how things are developing,