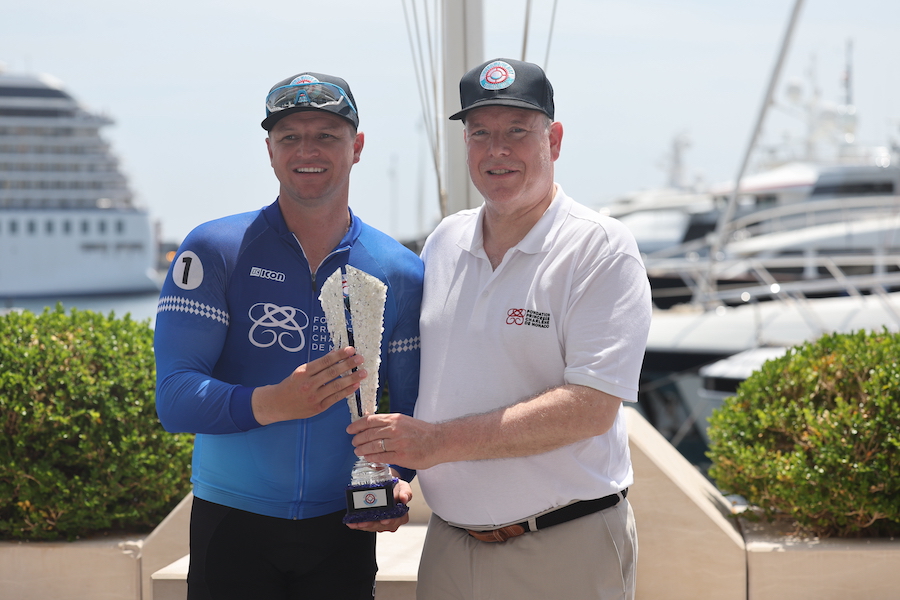 As the sun shone brightly over the Principality on Sunday, close to a hundred brave people took to the waters off Port Hercule for a gruelling 24-kilometre Riviera Water Bike Challenge, in which reigning champions team Serenity renewed their top position.

With Princess Charlene in self-isolation after contracting Covid-19, it was up to her husband Prince Albert II and children Hereditary Prince Jacques and Princess Gabriella to cheer on the teams on Sunday 5th June.

The Prince signalled the start of the challenge at exactly 10:10am at the Yacht Club of Monaco, where 19 water bikes took off to join the course at the Solarium de la Digue Rainier III where the relay zone was located.

In the end, a total of 95 people took part in the challenge, including 41 sports celebrities. The aim: to raise awareness of and funding for the Princess Charlene of Monaco Foundation.

With the sun shining, the public came out in force to cheer on the cyclists at the Solarium, as they completed 22 laps in difficult conditions of heat, humidity, and swell.

After more than two hours and 50 minutes of racing, it was team Serenity who crossed the finish line at the Yacht Club first. The team was made up of Gareth Wittstock, Secretary General of the Princess Charlene of Monaco Foundation, Terence Parkin, Ambassador of the Foundation, Caleb Ewan, Philip Deignan and David Tanner.

Prince Albert II presented the trophies to the winning teams. They were created especially for this event by local jeweller Alberto Vitale and made from recycled materials found on the beach of Monaco.

Minister of the Interior Patrice Cellario and Ambassador of France to Monaco Laurent Stefanini presented the trophies respectively to the 2nd and 3rd teams.

The Riviera Water Bike Challenge is designed as a fun and friendly sporting challenge to raise funds for the prevention of drowning. This year, the money will finance the ‘Swim for Safety’ project supported by the Princess Charlene of Monaco Foundation in Sri Lanka, to teach swimming and water safety to underprivileged children. The public were able to follow the race online, from start to finish, and donate by voting for their favourite team.

There was a great atmosphere at both the Solarium and the Yacht Club of Monaco, where everyone was able to enjoy a bbq, live music, and a jumping castle for the kids.

Come 2.30pm, it was time for Stéphanie Geyer Barneix, Race Director of the Riviera Water Bike Challenge, to kick start the Cap Optimist: Monaco Athens expedition, departing from the Yacht Club of Monaco. The Cap Optimist team is made up of six experienced water women and lifesaving champions – Stéphanie Geyer Barneix, Alexandra Lux, Emmanuelle Bescheron, Itziar Abascal, Margot Calvet, and Marie Goyeneche, who will take turns on a paddleboard to reach Athens, Greece, in 15 days, covering more than 1,800 kilometres.

The aim is to raise funds for the educational projects of the Princess Charlene of Monaco Foundation and for the ELPIDA association in Greece, which accompanies sick children with cancer.

The race was blessed in the presence of Prince Albert, Minister of State Pierre Dartout, Ambassador of France to Monaco Laurent Stefanini, and many Monegasque personalities.

This expedition is also a preparation for the great Cap Optimist crossing in the South Pacific, from Peru to French Polynesia, which aims to set a new world record in 2023 and promote the Hope Team East association, a group which helps sick people to live better thanks to sport. People can support Cap Optimist by purchasing kilometers (1 km = 100€).

Click on the gallery below for more photos from the Riviera Water Bike Challenge, photos by Claudia G. Albuquerque…