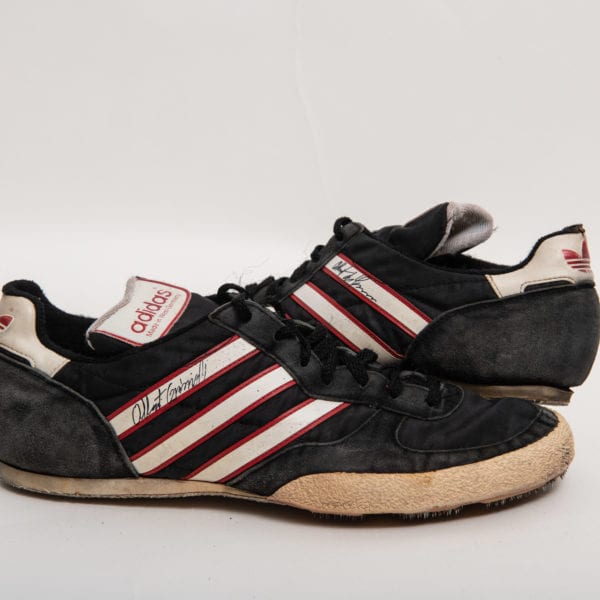 How much would you pay for a pair of old Adidas worn by Prince Albert when he competed in the 2002 Winter Olympics? Well, the Princess Charlene of Monaco Foundation South Africa is hoping for a pretty penny when the shoes go under the hammer in a week’s time.

At an auction like no other, personal items from the Princely couple and artworks personally chosen by the Princess will be auctioned within the week, with the proceeds going to the Princess’s #strongtogether campaign in South Africa.

Princess Charlene has donated her Tesla Model S P85, with a starting bid set at €25,000, while Prince Albert has kindly handed over a pair of limited series Adidas shoes that were made especially for his final season of bobsled races circa 2000/2002, including the Winter Olympics. He’s also personalised them with his autograph.

A selected image chosen by Princess Charlene from photographer Kristian Schmidt is also set to go under the hammer, with a starting bid of $12,000.

And finally, a portrait of Princess Charlene by Conor McCreedy painted in his signature blue rounds out the auction with a starting bid of $30,000.

The foundation’s #strongtogether campaign in South Africa has seen support from celebrity ambassadors, corporations and the public-at-large who have assisted the cause by spreading awareness and bringing relief to those impacted by the Covid-19 epidemic.

The auction will run until midnight on 23rd June. Bids and more information can be found at www.pcmfsa.com/auctions

Local News Staff Writer - August 13, 2018
The French government, aiming for a 100% goal for recycled plastics by 2025, wants to encourage consumers to favour products made from recycled materials.

Local News Cassandra Tanti - July 9, 2019
On the back of winning the title of best meeting in the 2018 Diamond League, the 33rd edition of Herculis Monaco promises to be another high level event.