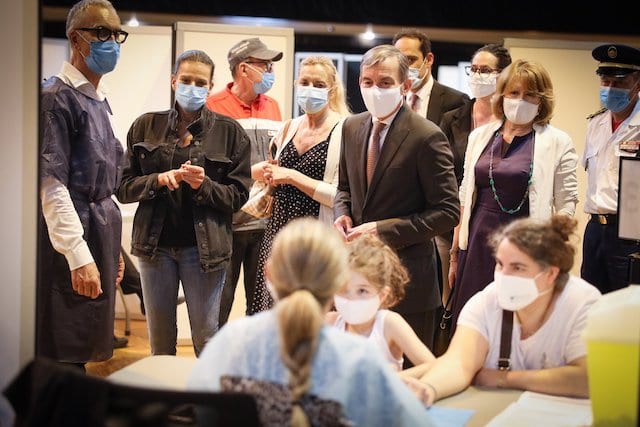 Princess Stéphanie is the latest high-profile Monegasque to visit a Covid-19 screening centre to show her support for the people behind Monaco’s mass testing programme.

Princess Stéphanie visited the volunteers of the Léo Férré screening centre on Wednesday, paying particular attention to her team of volunteers from Fight Aids Monaco. The group has been mobilised alongside the Monaco Red Cross for more than two weeks, taking blood samples as part of a country-wide Covid-19 screening campaign.

The Princess was welcomed by Health Minister Didier Gamerdinger and other elected officials, as well as Frédéric Platini, Secretary of the Monaco Red Cross. 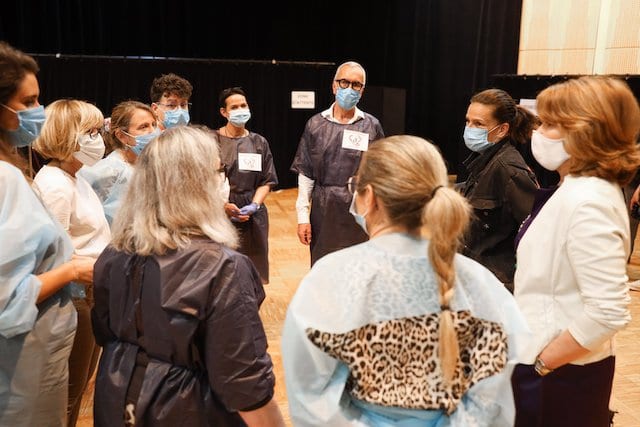 Saturday 30th May marks the final day of phase one of the campaign, during which the government is hoping to have achieved widespread testing among the population of over 38,500 people.

The Principality’s employees will be the focus of the second round, as well as those individuals who were not able to get tested during phase one.

The Palace has released a gorgeous family portrait of Prince Albert and Princess Charlene to mark their 9th wedding anniversary.

A Charles III College student has tested positive for Covid-19, prompting a trace and test operation of everyone that he has been in contact with in recent days.

Those who turned out for the 8am start were given the choice of taking on one of five organised events, choosing land or sea-based options. There was something for all, including a hike from the Tête de Chien and a 7km walk/run along Plage Mala from Decathlon.

Due to a heavy swell, the Stand Up Paddle CleanUp and Suncy CleanUp activities were canceled but were replaced by a Beach Cleanup on the Larvotto beach which gathered about fifteen participants.

Prince Albert II joined in for the Stars ‘N’ Bars-organised walk, where he contributed by picking up waste found along the route to Larvotto, which marked the end of the course.

The goal of the event was, of course, to collect as much rubbish as possible whilst enjoying a morning in the great outdoors. In total, nearly a tonne of waste was collected in the Principality including countless cigarette butts, a large quantity of plastic and glass bottles, cardboard packaging, wire mesh and even wooden pallets and chairs.

At 11:45am, all the participants gathered on the beach to weigh what had been collected, then celebrated by having a group aperitif offered by the Mairie.

The Monaco event mirrored action that was taking place across the globe simultaneously on Saturday. World Clean-up Day was created a decade ago as a social-action programme in the battle against litter. It is now celebrated in 158 countries on the third Saturday of September and has 18 million people partaking. France boasts 200,000 active participants.

Monaco’s contribution, in its first ever attempt, saw a fantastic turnout and a solid base to build on for next year’s event.

Local News Staff Writer - August 14, 2018
A 32-year-old French businessman has escaped with a suspended sentence after his arrest for drunk-driving and criminal damage.