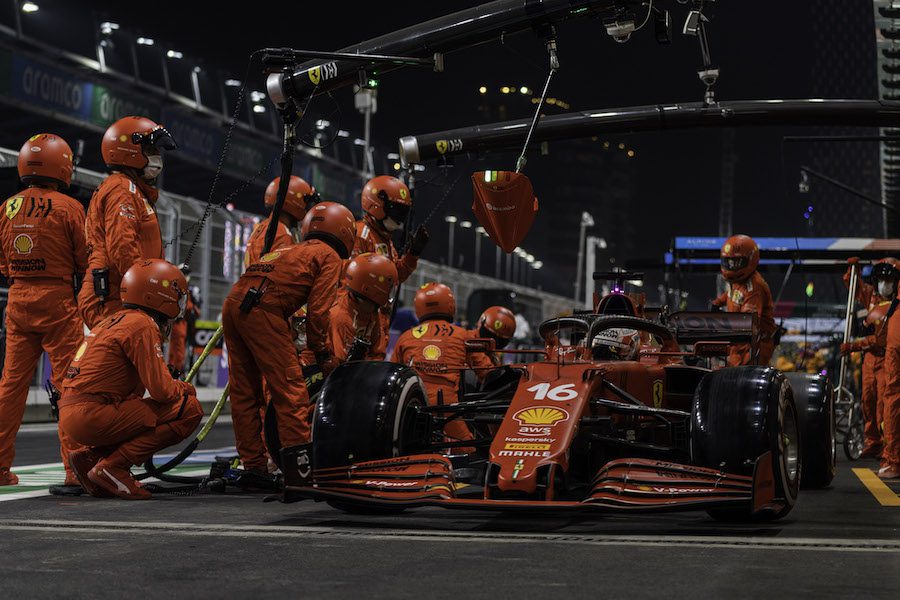 Sunday’s inaugural Saudi Arabia Grand Prix played host to one of the most memorable and dramatic F1 races in recent history, treating us to multiple red flags and collisions between the title rivals.
Charles Leclerc, following a strong qualifying, will be disappointed to have not converted his fourth-place grid position, ultimately finishing in a respectable seventh place. The Monegasque driver was one of many to have lost out in the mid-race carnage, which produced two red flags.
Having crashed on the exit of the final corner on Saturday’s qualifying, Max Verstappen only qualified third, whilst Lewis Hamilton took pole. Valterri Bottas, an ambassador at last week’s Beking event in Monaco, started second. All three got a good launch and remained in formation, with Leclerc trailing in fourth.
The turning point in the race came from a relatively innocuous crash from Mick Schumacher, which brought out the red flag as repairs were needed to repair the barrier. This, however, was after many in the field, including Leclerc and Hamilton, had pitted for new tyres, leaving them languishing further down the field. Verstappen was the main benefactor as he stayed out, changed his tyres under the red flag and found himself leading the race.
From a grid restart, Hamilton launched down the inside of Verstappen, but the Dutchman hung-on around the outside; the Briton took evasive action to avoid the Red Bull, and subsequently lost out to Esteban Ocon.
Further down the field, Leclerc was squeezed against the barrier by Perez, sending the Mexican spinning and causing a subsequent crash involving Nikita Mazepin and George Russell, bringing out another red flag.
Dramatic radio negotiations between the FIA, Red Bull and Mercedes during the second red flag meant that, in order to avoid incurring a penalty, Verstappen would give back the positions to Ocon and Hamilton, and start in third.
On the second restart however, Verstappen overtook Hamilton at turn one as the cars ran three abreast. Ocon was a sitting duck for Verstappen and then for Hamilton, who both made light-work of getting by the Frenchman.
Hamilton, with superior pace on the hard tyres closed in on Verstappen, almost overtaking with the Dutchman only maintaining the place having run wide. He was then ordered to give the place to Hamilton, who in trying to overtake the slow-moving Red Bull, dramatically ran into the back, damaging the Briton’s front-wing. Hamilton did eventually pass, despite a couple of gung-ho moves from Verstappen, none of which stuck. Verstappen subsequently picked up penalties for the incidents, but maintained second position, whilst Hamilton took the chequered flag to leave the rivals level on points going into the final race.
Bottas overtook Ocon on the line to complete the podium, whilst Leclerc, one of the major victims of the mid-race carnage, finished seventh – crucially allowing him to overtake new Monaco resident, Lando Norris to take fifth position in the drivers’ standings.
The race was therefore bittersweet for Leclerc, who despite climbing the drivers’ standings, was left reflecting on what could have been. “It is a shame to only finish seventh, because we had the potential to do better,” he said after the race. “The red flag cost us three positions then came the contact with Perez and we lost more positions.”
Leclerc takes a slender lead over Norris going into the final race of the season in Abu Dhabi next weekend. All the attention, however, will be on Hamilton and Verstappen, as both vie to become world champion, in a title race that will go down to the wire.